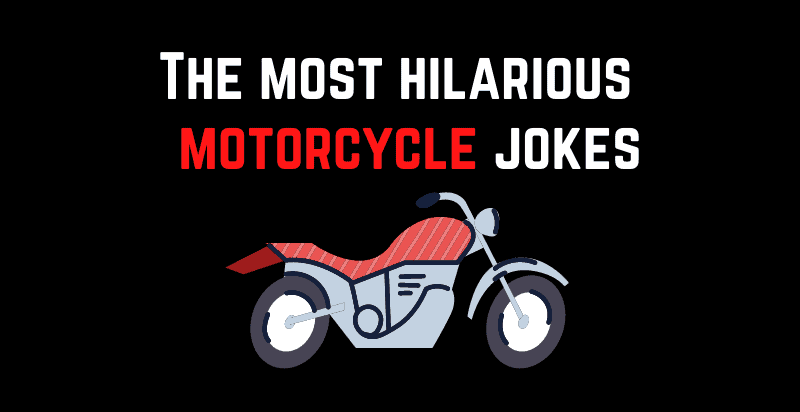 Today we have some of the funniest jobs about motorcycles – enjoy

The Ferrari vs the Moped

A hip young man goes out and buys a 2001 Ferrari 360 Spider. It is the best convertible sports car, costing about $250,000. He takes it out for a spin and while stopping for a red light, an old man on a moped, wearing an open face crash helmet (looking about 70 years old) pulls up next to him.

The old man looks over the sleek, shiny red surface of the car and asks, “What kind of car ya’ got there, sonny?”

The young man replies, “A 2001 Ferrari 360 Spider. They cost about a quarter of a million dollars!”

“Because this car can do over 200 miles an hour!” states the cool dude proudly.

The moped driver asks, “Can I take a look inside?”

“Sure,” replies the owner.

So the old man pokes his head in the window and looks around. Leaning back on his moped, the old man says, “That’s a pretty nice car, all right!”

Just then the light changes so the guy decides to show the old man what his car can do. He floors it, and within 30 seconds the speedometer reads 220 mph. Suddenly, he notices a dot in his rear view mirror. It seems to be getting closer!

He slows down to see what it could be and suddenly, whhhoooossshhh! Something whips by him, going much faster! “What on earth could be going faster than my Ferrari?!” the young man asks himself.

Then, ahead of him, he sees a dot coming toward him. Whoooooosh! It goes by again, heading the opposite direction! And it almost looked like the old man on the moped!

“Couldn’t be,” thinks the guy. “How could a moped outrun a Ferrari?!” Again, he sees a dot in his rear view mirror! Whooooosh Ka-BbblaMMM! The moped plows into the back of his car, demolishing the rear end. The young man jumps out, and it IS the old man!!! Of course, the moped and the old man are hurting for certain.

He runs up to the old man and says, “You gotta tell me how you got that thing to be faster than my Ferrari !”

The old man looks up and replies, “OK…, but first, unhook my suspenders from your side-view mirror, will ya?”

Badass Biker Bob wakes up at home with a huge hangover. He forces himself to open his eyes, and the first thing he sees is a couple of aspirins and a glass of water on the side table.

He sits up and sees his clothing in front of him, all clean and pressed. Bob looks around the room and sees that it is in perfect order, spotless, clean. So is the rest of the house.

He takes the aspirins and notices a note on the table: “Honey, breakfast is on the stove, I left early to go shopping. Love you.”

So he goes to the kitchen, and sure enough there is a hot breakfast and the morning newspaper. His son is also at the table, eating.

His son says, “Well, you came home after 3 A.M., drunk and delirious, broke some furniture, puked in the hallway, and gave yourself a black eye when you stumbled into the door.”

Confused, Badass Bob asks, “So, why is everything in order and so clean, and breakfast is on the table waiting for me?”

His son replies, “Oh, that! Mom dragged you to the bedroom, and when she tried to take your pants off, you said, “Lady, leave me alone, I’m married’!”

Fullfillment of a Dream

A successful gynecologist decides to fulfill his life’s dream: give up medical practice and become a motorcycle mechanic.

So he gets out of the medical business and enrolls at a mechanic’s seminar with Harley Davidson.

After many weeks of training comes the final examination, taking apart and then re-assembling a randomly chosen Harley engine.

He grabs his tools and sets to work, but soon he gets worried: while he is still working on the valve-covers, everybody else is already busy with removing the cylinder heads.

He falls more and more behind, and as he is just starting to put it all back together, everybody else is already finished.

He manages to put the engine back together, barely in time before the exam ends.

Because it took him so much longer than everybody else, he goes straight to the teacher to ask how he performed.

“Well,” the teacher says, “out of one hundred possible points you scored 150.” “But how is that possible?” the ex-gynecologist asks.

“For doing it all through the exhaust.”

What do you call a group of Harley Owners with a collective IQ of 120?
Sturgis !

What’s the difference between a Harley Davidson and a Hoover vacuum cleaner?
The Harley has room for two dirtbags on board.

Why do Harley owners have tassels on their handlebars and clothing?
To be able to tell if they’re moving or not !

How is a Harley Davidson like an old dog?
They both like to ride in the back of pickup trucks.

What is the difference between a Harley Davidson and an old dog?
The dog can get in the back of the pickup by itself.

How is a Harley Davidson like a Porcupine?
Both have pricks on their back.

How is a Harley Davidson like an old dog?
If you leave them alone long enough, they’ll both mark their territory.

Related: Bicycle and Bike Jokes – the funniest ones!

A young man has always dreamed of owning a Harley Davidson. One day he has finally saved up enough money so he goes down to the dealer. After picking out the perfect bike, the dealer asks if he would like some extra chrome protection added to the bill. The young man is upset because he does not have the extra money, and is now afraid that the chrome will rust as soon as it gets wet. The dealer tells him not to worry. There is an old biker trick that will keep the chrome like new. All he has to do is to keep a jar of Vaseline handy and put it on the chrome before it rains – and everything will be fine. The young man happily pays for the bike and leaves.

A few months later, the young man meets a woman and falls in love. She asks him to come home and meet her parents over dinner. He readily agrees and the date is set. At the appointment time, he picks her up on his new Harley and they ride to her parents house. Before they go in, she tells him that they have a family tradition that whoever speaks first after dinner must do the dishes.

After a delicious dinner everyone sits in silence waiting for the first person to break and get stuck doing the dishes. After a long fifteen minutes, the young man decides to speed things up, so he reaches over and kisses the woman in front of her family. And no one says a word…….

Next he decides to take a more direct approach, so he throws her on the table and has sex with her in front of everyone. And no one says a word…….

Now he is getting desperate, so he grabs her mother and throws her on the table. They have even wilder sex. And no one says a word……..

By now he is getting very worried and is thinking what to do next when he hears thunder in the distance. His first thought is to protect the chrome on his new Harley, so he reaches in his pocket and pulls out his jar of Vaseline.

And the father says “I’ll do the dishes!”