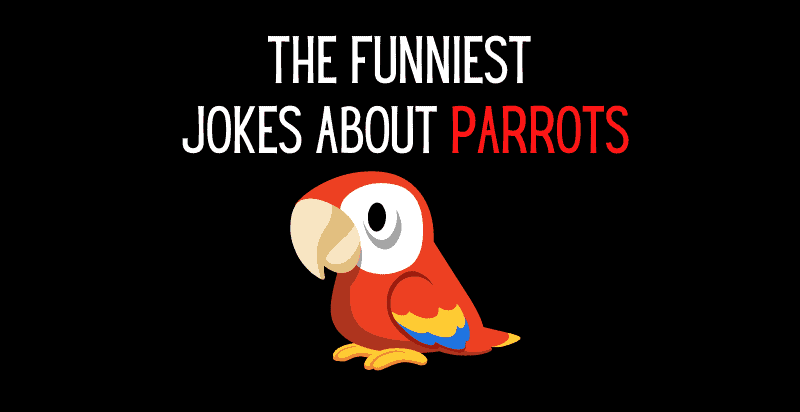 Parrots are not just suitable pets for children, they are also great for adults. When you feel like you are stuck in a rut, there is nothing better than a parrot joke to distract you from life’s troubles with a fun and silly parrot joke.

One of the most famous parrot jokes goes like this: “Did you know that a parrot can talk?” “No.” “Neither did I.” A lot of people find this joke to be funny because they think it is unexpected when the person they are talking to has no clue what they are talking about.

Parrot jokes are some of the jokes that kids find the funniest. Enjoy these!

To the person who stole my lamp, my coffee and my parrot.
I don’t know how you sleep at night.

What do you get when you cross a parrot and a centipede? A walkie-talkie!

Unfortunately, my obese parrot just died. It is, however, a huge weight off my shoulders.

What creature is smarter than a talking parrot?
A spelling bee.

What’s orange and sounds like a parrot?
A carrot.

My pet parrot, Nickel, just passed away.
Now I have a Nickel-less cage.

What do you call a parrot when he can’t fly?
A walkie talkie.

To determine the gender of a parrot you have to stick your finger in the cage.

A magician gets himself a parrot for his act.

After a couple weeks of performing with the magician the parrot begins to heckle the magician during his shows, saying things like, “It’s under his hat, it’s up his sleeve, his assistant has it.” The magician is performing on a cruise ship when the ship sinks. The magician wakes up on a piece of driftwood with the parrot standing on the opposite end.

The parrot and the magician spend 2 days floating at sea without saying a word.

Finally the parrot says, “Alright, I give up. Where’s the boat?” In order to be efficient, I named my parrots Roger, Gene, and Mick.

A well-loved parrot died, and was digitally immortalized in a 3D rendering.

Polygon but not forgotten.

What do you get if you cross a parrot with a pigeon?

What do you get when you cross a parrot and a centipede?

A young man named John received a parrot as a gift.

The parrot had a bad attitude and an even worse vocabulary. Every word out of the bird’s mouth was rude, obnoxious and laced with profanity.

John tried and tried to change the bird’s attitude by consistently saying only polite words, playing soft music and anything else he could think of to clean up the bird’s vocabulary.

Finally, John was so fed up he yelled at the parrot. The parrot yelled back.

John, in desperation, threw up his hands, grabbed the bird and put him in the freezer.

For a few minutes the parrot squawked and kicked and screamed.

Then suddenly there was total quiet. Not a peep was heard for over a minute.

Fearing that he’d hurt the parrot, John quickly opened the door to the freezer.

The parrot calmly stepped out onto John’s outstretched arms and said, “I believe I may have offended you with my rude language and actions. I’m sincerely remorseful for my inappropriate transgressions and I fully intend to do everything I can to correct my rude and unforgivable behavior.” John was stunned at the change in the bird’s attitude.

As he was about to ask the parrot what had made such a dramatic change in his behavior, the bird spoke up, and asked very softly, “May I ask what the turkey did?” Did you know there’s a name for when parrots mimic human speech?

I once dated a girl that owned a parrot. That thing would never shut up.

The parrot was cool, though.

A burglar broke into a house one night. He shined his flashlight around, looking for valuables when a voice in the dark said, “Jesus knows you’re here.” He nearly jumped out of his skin, clicked his flashlight off, and froze. When he heard nothing more, he shook his head and continued.

Just as he pulled the stereo out so he could disconnect the wires, clear as a bell he heard, “Jesus is watching you.” Startled, he shined his light around frantically, looking for the source of the voice. Finally, in the corner of the room, his flashlight beam came to rest on a parrot.

“Did you say that?” he hissed at the parrot.

“Yes”, the parrot confessed, then squawked, “I’m just trying to warn you that Jesus is watching you.” The burglar relaxed. “Warn me, huh? Who in the world are you?” “Moses,” replied the parrot.

The lady asks the pet shop owner, “Why so cheap?” The owner says, “This bird used to live in a house of ill-repute, so he says a lot of inappropriate things.” The lady can’t pass up the deal and decides to get the bird anyway. She gets the bird home and the first thing the bird says is, “Finally cleaned up this dump, and the new madam isn’t bad looking.” The lady finds it amusing. Soon after, her two teen daughters get home and the bird says, “New girls in the house, business will be booming tonight.” The girls are shocked but laugh it off.

A few hours later, the woman’s husband gets home and the bird says, “Hey Jim, not seen you for a couple of weeks!” A man walks into a bar in Vegas.

He has a parrot with him. This parrot is wholly remarkable; it is fluent in Spanish, French and English.

So, being a betting man- they’re all betting men down in Vegas -he goes up to the bartender and tells him, “I’ll bet you this here bird can speak Spanish.” The bartender knows this type, and slams his hand down on the counter with a $10 bill. “You’re on! Let’s see it.” So the man turned to the bird and asks, “Hablas Espanol?” The bird is silent as a stone.

“Well, watch this, then, he can speak French too. Parlez-vous Francais?” The parrot remains silent. The man is sweating through his jacket, and the bartender is chuckling derisively. “Hand over the cash, sir, and have a nice night.” As he walks dejectedly out of the bar, the man turns to the parrot. “You jerk!”, he cries. “You cost me ten bucks!” The parrot, taken aback, ruffles his feathers arrogantly. “Cost you? Buddy, I just made you a fortune! Think of the odds you can get there tomorrow!” I’m really worried about my parrot. He keeps saying, “I can’t go on, I hate my life”.

My wife is too selfish to notice. She’s always crying.

One day a man goes to a pet shop to buy a parrot.

The man asks, ”How much is the yellow one?” The assistant says, ”$2000.” The man is shocked and asks the assistant why it’s so expensive.

The assistant explains, ”This parrot is a very special one. He knows typewriting and can type really fast.” ”What about the green one?” the man asks.

The assistant says, ”He costs $5000 because he knows typewriting and can answer incoming telephone calls and takes notes.” ”What about the red one?” the man asks.

As she lay her pet on the table, the vet pulled out his stethoscope and listened to the bird’s chest.

After a moment or two, the Vet shook his head sadly and said, “I’m so sorry, Polly has passed away.” The distressed owner wailed, “Are you sure? I mean, you haven’t done any testing on him or anything. He might just be in a coma or something.” The vet rolled his eyes, shrugged, turned and left the room returning a few moments later with beautiful black Labrador.

As the bird’s owner looked on in amazement, the dog stood on his hind legs, put his front paws on the examination table and sniffed the dead parrot from top to bottom. He then looked at the vet with sad eyes and shook his head.

The vet led the dog out but returned a few moments later with a cat. The cat jumped up and also sniffed delicately at the ex-bird. The cat sat back, shook its head, meowed and ran out of the room.

The vet looked at the woman and said, “I’m sorry; but like I said, your parrot is most definitely, 100% certifiably dead.” He then turned to his computer terminal, hit a few keys and produced a bill which he handed to the woman.

A man goes into a pet shop to buy a parrot

The shop owner points to three identical looking parrots on a perch and says:

“Why does the parrot cost so much?” the customer asks.

The owner says, “Well, it knows how to use a computer.”

A woman walks into a pet store and sees three parrots. She asks the cashier how much is the first parrot and he says, “This parrot costs $500”.

Excuse me, could you please sparrow me some change?

I don’t know how you sleep at night.

Q What do you get if you cross a parrot with a centipede?

A. A walkie talkie!