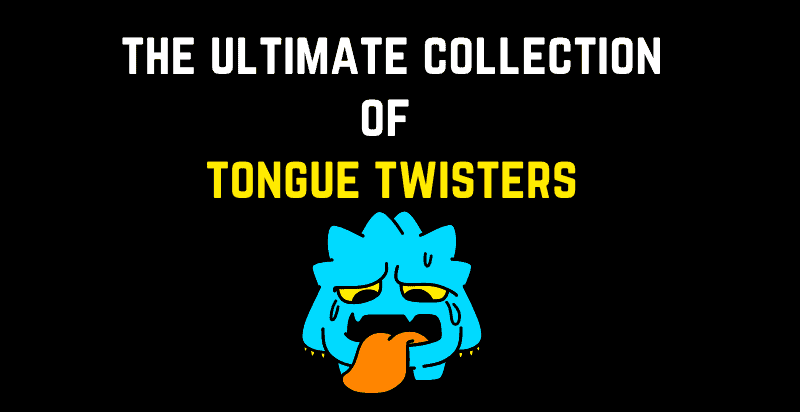 Tongue twisters are phrases that are difficult to articulate because of how fast they are, the number of words in the phrase, or because it contains long words.

These are good clean fun for all ages. Try them with friends or family and try to read them out loud as fast as you can!

Enjoy our ultimate collection. We have them grouped by Topic, including Holidays and also A-Z alphabetical.

Some Fun Tongue Twisters to Get You Started!

I bought a bit of baking powder and baked a batch of biscuits.

So she bought a bit of butter,

better than her bitter butter,
and she baked it in her batter,
and the batter was not bitter.
So ’twas better Betty Botter
bought a bit of better butter.

There once was a man who had a sister, his name was Mr. Fister.

She sells sea shells on the sea shore;

Sally is a sheet slitter, she slits sheets.

Ed Nott was shot and Sam Shott was not.

Tongue Twisters – Alphabetical A to Z

Tongue Twisters Starting with the Letter A

Tongue Twisters Starting with the Letter B

A cup of proper coffee in a copper coffee cup.
A cupcake cook in a cupcake cook’s cap cooks cupcakes.
Ape Cakes, Grape Cakes.
Catch a can canner canning a can as he does the cancan, amd you’ve caught a can-canning can-canning can canner!
Cheap sheep soup.
Chocolate chip cookies in a copper coffee cup.
Cinnamon aluminum linoleum.
Clean clams crammed in clean cans.
Crisp crust crackles.
Cuthbert’s cufflinks.
How much can can a cannibal nibble, if a cannibal can nibble can?
If you must cross a course cross cow across a crowded cow crossing, cross the cross coarse cow across the crowded cow crossing carefully.
Top chopstick shops stock top chopsticks.

A dozen dim ding-dongs.
Did Dick Pickens prick his pinkie pickling cheap cling peaches in an inch of Pinch or framing his famed French finch photos?
Does this shop sport short socks with spots?
Don’t pamper damp scamp tramps that camp under ramp lamps.
Don’t spring on the inner-spring this spring or there will be an offspring next spring.
Double bubble gum, bubbles double.
Dr. Johnson and Mr. Johnson, after great consideration, came to the conclusion that the Indian nation beyond the Indian Ocean is back in education because the chief occupation is cultivation.
Dust is a disk’s worst enemy.
How much dew would a dew drop drop, if a dew drop did drop dew?

Hassock hassock, black spotted hassock. Black spot on a black back of a black spotted hassock.
He threw three balls.
He threw three free throws.
Hiccup teacup!
Higgledy-Piggedly!
Hi-Tech Traveling Tractor Trailor Truck Tracker
How can a clam cram in a clean cream can?
How many berries could a bare berry carry,
How many cans can a canner can if a canner can can cans? A canner can can as many cans as a canner can if a canner can can cans.
How many moose might a mini-mouse move if a mini-mouse might move moose?
How many sheets could a sheet slitter slit if a sheet slitter could slit sheets?
How many yaks could a yak pack pack if a yak pack could pack yaks?
How much caramel can a canny canonball cram in a camel if a canny canonball can cram caramel in a camel?
How much ground could a grounghog grind if a groundhog could grind ground?
How much oil boil can a gum boil boil if a gum boil can boil oil?
How much pot, could a pot roast roast, if a pot roast could roast pot.
The hare’s ear heard ere the hare heeded.

Tongue Twisters Starting with the Letter I

Can you imagine an imaginary menagerie manager
I correctly recollect Rebecca MacGregor’s reckoning.
I eat eel while you peel eel
I scream, you scream, we all scream for ice cream!
I see Isis’s icy eyes.
I slit a sheet, a sheet I slit, and on that slitted sheet I sit.
I slit a sheet, a sheet I slit, upon a slitted sheet I sit.
I slit the sheet and the sheet slit me the slit in the sheet was slit by me
I slit the sheet, the sheet I slit, and on the slitted sheet I sit.
I stood sadly on the silver steps of Burgess’s fish sauce shop, mimicking him hiccuping, and wildly welcoming him within.
I thought, I thought of thinking of thanking you.
I was born on a pirate ship – Hold your tounge while saying it.
I wish I were what I was when I wished I were what I am.
I wish to wash my Irish wristwatch.
I wish to wish the wish you wish to wish, but if you wish the wish the witch wishes, I won’t wish the wish you wish to wish.
I wish to wish, I dream to dream, I try to try, and I live to live, and I’d die to die, and I cry to cry but I dont know why.
I wish you were a fish in my dish
I would if I could! But I can’t, so I won’t!
If a bare berry could carry berries?
If a Hottentot taught a Hottentot tot to talk ere the tot could totter, ought the Hottentot tot be taught to say ought or naught or what ought to be taught ‘er?
If colored caterpillars could change their colors constantly could they keep their colored coat colored properly?
If Kantie can tie a tie and untie a tie,
If Stu chews shoes, should Stu choose the shoes he chews?
If two witches would watch two watches, which witch would watch which watch?
Ike ships ice chips in ice chips ships.
I’ll chew and chew until my jaws drop.
Inchworms itching.
Irish wristwatch
Is this your sister’s sixth zither, sir?
managing an imaginary menagerie?

A missing mixture measure.
Mallory’s hourly salary.
Many an anemone sees an enemy anemone.
Miss Smith lisps as she talks and lists as she walks.
Miss Smith’s fish-sauce shop seldom sells shellfish.
Mix, Miss Mix!
Mommy made me eat my M&Ms.;
Moose noshing much mush.
Mr. Tongue Twister tried to train his tongue to twist and turn, and twit an twat, to learn the letter “”T””.
Mrs Hunt had a country cut front in the front of her country cut pettycoat.
Mrs. Smith’s Fish Sauce Shop.
Much mashed mushrooms.
Mummies make money.
Why may we melee, when we may waylay?

Do thick tinkers think?
I shot three shy thrushes.
Tacky tractor trailer trucks.
Ten tame tadpoles tucked tightly together in a thin tall tin.
Thank the other three brothers of their father’s mother’s brother’s side.
that is the way you spell New York.
The batter with the butter is the batter that is better!
The big bad baby brought the bought black blanket back
The boot black bought the black boot back.
The crow flew over the river with a lump of raw liver. .
The epitome of femininity.
The Leith police dismisseth us.
The myth of Miss Muffet.
The ochre ogre ogled the poker.
The queen in green screamed.
The ruddy widow really wants ripe watermelon and red roses when winter arrives.
The sawingest saw I ever saw saw
The sea ceaseth, but it sufficeth us
The seething sea ceaseth; thus the seething sea sufficeth us.
The seething seas ceaseth and twiceth the seething seas sufficeth us.
The sixth sick sheik’s sixth sheep’s sick.
The soldier’s shoulder surely hurts!
The soldiers shouldered shooters on their shoulders.
The thirty-three thieves thought that they thrilled the throne throughout Thursday.
The two-twenty-two train tore through the tunnel.
Thelma sings the theme song.
There goes one tough top cop!
There those thousand thinkers were thinking where did those other three thieves go through.
There those thousand thinkers were thinking how did the other three thieves go through.
There was a little witch which switched from Chichester to Ipswich.
There was a minimum of cinnamon in the aluminum pan.
There’s a sandwich on the sand which was sent by a sane witch.
These thousand tricky tongue twisters trip thrillingly off the tongue
They both, though, have thirty-three thick thimbles to thaw.
They have left the thriftshop, and lost both their theatre tickets and the volume of valuable licenses and coupons for free theatrical frills and thrills.
Thieves seize skis.
Thin sticks, thick bricks
Thirty-three thirsty, thundering thoroughbreds thumped Mr. Thurber .
This is a zither.
This is the sixth zebra snoozing thoroughly.
Three free throws.
Three short sword sheaths.
Three twigs twined tightly.
Tie twine to three tree twigs.
Tim, the thin twin tinsmith
Tim, the thin twin tinsmith.
To have truck to truck two trucks of truck.
Tom threw Tim three thumbtacks.
Tommy Tucker tried to tie Tammy’s Turtles tie.
Tommy, Tommy, toiling in a tailor’s shop.
Tragedy strategy.
Truly rural.
Twelve standard stainless steel twin screw cruisers.
Twelve twins twirled twelve twigs.
Twice we tripped toys.
Two tiny tigers take two taxis to town.
Two to two to Toulouse?
Two toads, totally tired.
Two tried and true tridents
Two Truckee truckers truculently truckling
Theopholus Thistle, the successful thistle sifter, successfully sifted some thistles.

Tongue Twisters Starting with the Letter U

Real wristwatch straps.
Wally Winkle wriggles his white, wrinkled wig.
Was the saw I saw saw in Arkansas.
Wash Washington’s windows with warm washing water.
Wayne went to Wales to watch walruses.
We surely shall see the sun shine soon.
Well they can’t carry berries
We’re real rear wheels.
Wetter weather never weathered wetter weather better.
What a shame such a shapely sash should such shabby stitches show.
What time does the wristwatch strap shop shut?
When Washington’s washer woman went west?
When you write copy you have the right to copyright the copy you write. …
Which rich wicked witch wished the wicked wish?
Which witch watched which watch?
Which witch wished which wicked wish?
Which wristwatch is a Swiss wristwatch?
While we were walking, we were watching window washers
While we were walking, we were watching window washers wash Washington’s Windows with warm washing water.
Who washed Washington’s white woolen underwear
Whoever slit the sheets is a good sheet slitter.
Why can’t I tie a tie and untie a tie like Kantie can.
Will you, William?
Willie’s really weary.
Wow, race winners really want red wine right away!