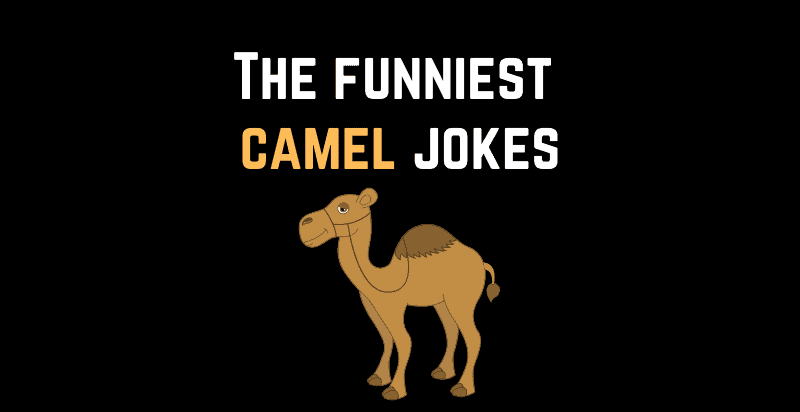 Camels are an important part of the Middle Eastern culture. In fact, they are considered to be one of the most important domesticated animals in the Middle East. They have been used for millennia as a transport animal, and they have also been used as a beast of burden.

They are known for their long necks, which allow them to get food that is too high up, and their humps that store water and fat. They can survive without food or water for as long as two weeks in the desert conditions.

And now, lets hear some jokes about camels! And we also have the best camel puns for you below too.

After eating his main course, where does a camel go?
He walks straight to the desert trolley.

What did the camel say to the Oasis?
I’ll never desert you

Why do camels say they leave a party early?
Because they get the hump.

What is sweet and walks across a desert?
A Caramel

What is a baby camels favourite nursery rhyme?
Hump-ty dumpty!

What did the director of the desert movie say?
“Lights, camel-ra, action!”

What do you call a frozen camel?
Lost.

What is a camels favourite day of the week?
Hump-day! (Wednesday).

Why did the camel cross the road?
Because there are no chickens in the desert!

How do the cool camels say hello?
How you dune?

What do you call a camel with no humps?
Humphrey (hump-free)

Why do camels blend in so well to their surroundings?
They use camel-flage

What is a desert nomad’s favorite cheese?
Camelbert

What did the camel say to the ostrich?
Nothing, it can’t speak.

How do you refer to a three-humped camel?
Pregnant!

The Best Elephant Jokes Ever!

What is the favorite nursery rhyme of a baby camel?
“Hump-ty Dumpty.”

What made the camel cross the road?
Because there are no chickens in the desert.

What is the proper way to serve tea to a camel?
One hump or two?

What do you call a camel that looks the same from both sides?
A palindromedary!

What is the difference between a one humped and two humped camel?
A hump.

Have you heard about the camel that was accused of stock fraud?
He took part in a hump and dump scheme.

Why don’t you see Camels going to school with cows?
Because they don’t want to put up with that drama dairy.

Have you heard about the camel who got a job playing a cow on Broadway?
She was a real drama dairy.

How do you describe a thirsty camel?
A dry humper.

How do you refer to a frozen camel?
Lost.

What does a camel do with a pudding?
Walks through the desert.

Have you heard about the new show about a camel on a cow ranch?
It’s been called a dairy drama about a dromedary.

One time, I tried riding a camel instead of a horse.
It had its ups and downs.

Climbing a camel isn’t as difficult as they say.
Once you get over the first hump, the rest is easy.

I just got back from Dubai where I was offered 40 camels for my wife.

I usually smoke Marlboro but hey… a deal’s a deal.

Camels can work without drinking all week.
A man can drink all week without working.

When you cross a camel with a cow, you will end up with a lumpy milkshake.

When ordering a coffee, camels are often asked “One hump of sugar or two?”

These are funny one liners. Great to sneak into a casual conversation and see if you can make your friends laugh!

The camel couldn’t fall asleep so he had some camel-mile tea.

A camel’s favorite place to visit is Camel-bodia!

The sweetest camel is called a caramel!

The royal family of camels live in Camel-lot Castle!

That camel is great at hiding. He’s a real camel-leon!

Moral of the Story Jokes

The camel looked at the Sahara and said, “Long time no sea!”

Hey Camel, how you been dune?

That camel loves to gossip. She’s a real drama-dairy.

Don’t worry about it, camel take care of that!

The latest fashion trend among camels is wearing s-calves!

A camel’s favorite car is the Toyota Camelry.

Camels love to pose for the camel-ra!

A popular celebrity amongst camels is Camel-ron Diaz!

You need to have passionate camelpaigners in your camp if you want to win the election!

Nobody could believe that the be-camel sauce was dairy-free!

Two young camels went for a coffee at the roadside calf-e.

When camels need medicine, they go to the fur-macy.

The camel had to be airlifted by crane, it was a camel tow.

If you cross a camel and a cow, you’ll end up with a very lumpy milkshake.

Once, I tried to ride a camel instead of a horse. It had a lot of ups and downs.

A camel looked at another camel and said, “I have never seen herbivore!”.

That sleepy camel is still calf-asleep!

A camel’s favorite sauce has got to be be-camel!

The camel was very upset. He bought something from the black market and found out that he’d been s-camel-ed.

The camel is very pessimistic. He sees everything as glass hoof empty.

A camel like that is great at hiding.
He’s a real camel-leon!

The camel looked at the Sahara and said, “Long time no sea!”

What is sweet and walks across the desert?
A Caramel.

What makes camels blend in so well with their surroundings?
They use camel-flage.

How does a camel cross the desert without going hungry?
Because of all the sand-wiches there!

What did the camel tell the oasis?
I will never desert you!

What makes camels blend in so well with their surroundings?
They use camel-flage.

Can you name a camel’s favourite food?
Desert.

When a camel hides, what does it do?
Camelflage.

Where would you park a camel?
The Camelot.

How do you describe a camel covered in plastic that has no hump?
Llamanated.

When a camel eats another camel, what do you call them?
A camibal

Here are the best puns about camel humps, LOL.

A camel with three humps? It’s got to be pregnant!

That camel has no humps. His name is Humphrey.

Riding a camel really isn’t that hard. Once you get over the first hump, the rest is easy!

When you’re a camel, every day is hump day.

I was left feeling a bit of a c-hump after I tripped over.

A crying camel? Don’t you mean a humpback whale?

When ordering a coffee, camels are often asked “One hump of sugar or two?”

Which one of these desert puns is your favorite?

Camels don’t really like dinner, but they love desert.

Camels find it very easy to hide. They have that natural desert camel-flage.

You can’t go on a trip to the desert without a camel-corder!

Camels never go hungry, there are plenty of sand-wiches in the desert!

Two guys are on duty at a French Foreign Legion fort. One says to the other one, “See that camel over there? I’ll bet you I can make him jump 30 feet in the air.

The other guy says no way.
So, the first guy walks around to the back of the camel with two bricks.

Reaches in between the camel’s legs and crashes the bricks together. Camel jumps 30 feet in the air.

A couple of days later the first guy says to the second guy. I bet you I can make that camel nod his head yes.

The second guy says, ” You got me last time. But there’s no way you can make that dumb animal nod his head yes.”

The first guy takes the same two bricks, walks around to the front of the camel, holds up the bricks and says,”Remember me?”.