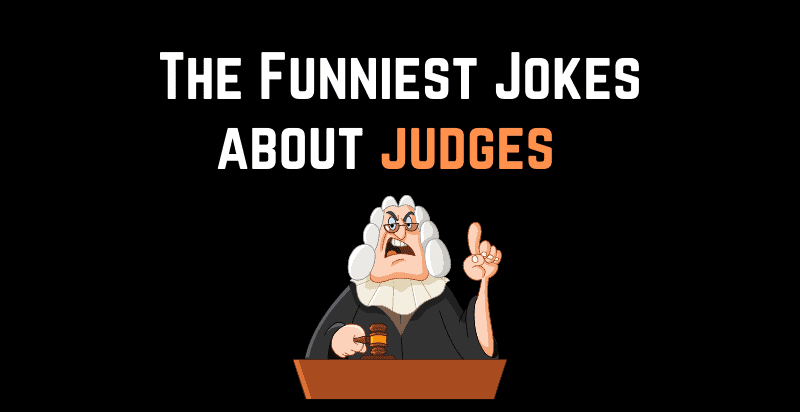 Judges are the people who make decisions in a court of law. They are usually lawyers, but they can also be lay people.

Judges have to be impartial and unbiased when making decisions. They must not let their personal feelings or opinions affect their decision-making process. Judges must also be able to think logically and rationally, as well as understand the law and legal procedures.

Our Favorite Jokes about Judges!

The judge said to his dentist: “Pull my tooth, the whole tooth and nothing but the tooth.”

How is a judge like an English teacher?
They both hand out long sentences.

What does a judge put in her beverages?
Just ice.

What did the judge say to the dentist?
Do you swear to pull the tooth, the whole tooth and nothing but the tooth?

A drunk was in front of a judge.
The judge says “You’ve been brought here for drinking.”
The drunk says, “Okay, let’s get started.”

Story Jokes about Judges, Court and the Legal System

Shoplifting Granny Before the Judge

Shoplifting An old lady gets caught shoplifting. On court day the lady and her husband who goes with her stands before the judge and he says to her, “Why did you shoplift?”

And she says “I was hungry.” The judge says “What did you take?” She replys, “A can of peaches.”

So the judge trying to figure out how to punish her says, “How many peaches where in the can?” The lady says “6” so the judge says ok then 1 day per peach in jail that will be 6 days time served.

The judge says would anyone like to say anything and her husband says your honor, “She stole a can of peas too”

The cross eyed judge looked at the three defendants in the dock and said to the first one, “So how do you plead?”

“Not guilty” said the second defendant.

“I wasn’t talking to you” the judge replied.

“I never said a word” the third defendant replied.

The defendant stood up in the dock and said to the judge, “I don’t recognize this court!”

“Because you’ve had it decorated since the last time I was here.”

Bill was charged with stealing a Mercedes Benz, and after a long trial, the jury acquitted him. Later that day Bill came back to the judge who had presided at the hearing.

“Your Honor,” he said, “I wanna get out a warrant for that dirty lawyer of mine.”

“Why ?” asked the judge. “He won your acquittal. What do you want to have him arrested for?”

“Well, Your Honor,” replied Bill, “I didn’t have the money to pay his fee, so he went and took the car I stole.”

A red-faced judge convened court after a long lunch. The first case involved a man charged with drunk driving who claimed it simply wasn’t true.

“I’m as sober as you are, your honor,” the man claimed.

The judge replied, “Clerk, please enter a guilty plea. The defendant is sentenced to 30 days.”

The Judge admonished the witness, “Do you understand that you have sworn to tell the truth?” “I do.” ”

Do you understand what will happen if you are not truthful?” ”

Sure,” said the witness….”My side will win.”