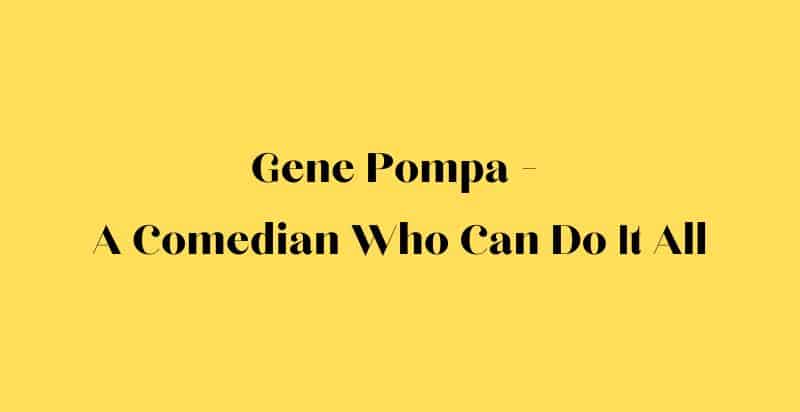 Gene Pompa is a popular standup comedian and writer who was born in east Los Angeles and raised in Southern California’s working-class suburbs. Pompa is Mexican-American, and as such, he draws inspiration from his multi-ethnic upbringing and heritage for his standup sets and writing.

In addition to stand up and writing, Pompa is also an actor, a fashion icon, podcaster, and a life coach. Keeping this in mind, we can safely conclude that Gene Pompa is a comedian who can do it all. Let’s take a look at some of the most lesser-known facts and appearances of Gene Pompa most people don’t know..

1. Gene Pompa Was Cast in Just Go with It

Just Go with It is a hit comedy and romance movie released in 2011. The movie covers the story of a plastic surgeon who persuades his assistant to roleplay as his wife on a weekend trip to Hawaii in order to draw a veil over a careless lie he told to his girlfriend. The movie was nominated for 13 awards and won five including ASCAP Film and Television Music Awards for the category of Top Box Office Films and Teen Choice Awards for the categories of Choice Movie Chemistry and Choice Movie Breakout: Female.

Gene Pompa played the role of the delivery guy and starred along with renowned television actors such as Adam Sandler and Jennifer Anniston. The movie was directed by Dennis Dugan. While not a very major role, working with such big names did offer Pompa recognition for his skills and helped him get his foot into the door of the acting industry.

2. Gene Has Performed and Toured at Various Comedy Clubs

Pompa’s love for comedy and standup has directed him through several comedy clubs. The talented comedian has performed at Irvine Improv, Brea Improv, Stir Crazy Comedy Club, various locations of the laugh factory chain of comedy clubs, and even in Agua Caliente Casino Palm Springs.

3. Gene Pompa Starred in Bucky Larson: Born to Be a Star

Bucky Larson: Born to Be a Star is a 2011 comedy film that follows the story of a kid from the Midwest who, in order to follow in the footsteps of his parents, moves to Hollywood in an attempt to become an adult entertainment star and amass popularity and fame along the way.

The movie won the Village Voice Film Poll award in 2011 and was nominated in six categories for Razzie Awards in 2012. Gene Pompa played the role of Tomas and starred next to other rising actors including Nick Swardson and Christina Ricci. The movie was co-written by Adam Sandler and was directed by Tom Brady.

4. The Standup Comedian Has Been Featured on Late Night with Conan

The Late Night with Conan was a hit American comedy talk show hosted by the comedian and Harvard lampoon alumnus Conan O’Brien. The silly and whimsical talk show was centered around guest celebrities being invited onto the show where they would chat and engage in games with Conan. The late-night show aired from 1993 to 2009 and put out 2,700 episodes.

Furthermore, had won 1 primetime Emmy award and 8 other awards. In addition, the talk show had also garnered over 56 nominations over the years.

On May 5th, 2006, the 13th season of the show and its 115th episode, Gene Pompa was one of the guest invites. The standup comedian was invited to perform one of his comedy scripts. Pompa’s performance was focused on his untidy habits including not washing his dishes and him getting an ant farm because of it. Gene was featured on Late Night with Conan several times before as well including in 2002, 2001, 1999, and 1994.

5. Gene Has Been Featured on the Comedy Central Roast

Eight to 10 people are invited, and they roast each other before roasting the show’s guest of honor and to date, there have been a total of eighteen roasts and artists from all industries including actors, musicians, and comedians have all been the subject of roasts.

Gene Pompa was invited to one such roast, the subject of which was Bob Saget. The special came out on17th August, 2008, which was the 6th episode of the series.

6. The Up-and-Coming Comedy Legend Has Featured on Scrubs

Scrubs is a famous American TV series centered around John J.D. Dorian, who, while interning at the surreal world of Sacred Heart Hospital, learns the ways of friendship, life, and of course, medicine. The series lasted for 182 episodes and ran from 2001 to 2010 with the last episode airing on March 17th, 2010. Gene Pompa played the role of Paulo on the 7th episode of season 7 which aired on April 10th, 2008.

7. Pompa Was Invited on the What’s Up Fool? Podcast

What’s Up Fool? Podcast is a comedy podcast series hosted by the Comedian Felipe Esparza where he invites random people, he thinks are interesting, onto the show and chats with them. It could be a celebrity, someone well-known, or conversely, it could be a homeless person sitting at the end of your street. No matter who they are, everyone has a story to tell about how they got to where they are and hearing that  story is what the show is all about.

The podcast series premiered on March 31st, 2014 and has to date, released 386 episodes. Gene Pompa was invited onto the show on April  1st,2006 on the 96th episode of the show. Gene and the host chat about Gene’s journey into the world of comedy and how he met and worked with some of the other renowned artists in the industry.

8. The Comedian Has Been Featured on Probably Science

Probably Science is a podcast series that uniquely combines the worlds of comedy and science. The show is hosted by professional comedians having questionable backgrounds in STEM education. Matt Kirshen, Andy Wood, and occasionally Brooks Wheelan or Jesse Case, host the show, which features a rotating cast of up-and-coming and influential figures from the science and comedy worlds.

The show has released 470 episodes in total and is one of the highest rated shows on Apple podcasts. Gene Pompa was invited on the show on October 10th, 2020 which was the 401st episode of the show. Matt, Andy, and Gene talk about a variety of strange topics including extremely long phrases, methanol-fueled robot beetles, the reason behind moon’s rusting, methylated alcohol, and smartphones that can tell if you’re drunk-walking.

If you see Gene Pompa’s number show up on your caller ID, maybe don’t pick up. Just saying.

Gene Pompa is one of the best talents in the comedy industry right now. His clean and laidback comedy style along with his hilarious scripts, more often than not, has his audience roaring with laughter. In addition to comedy, the artist has proven to be a capable actor, podcaster, and writer. Make sure to check out Gene’s performances, you’ll surely have the time of your life!

Kevin Nealon – Get to Know This Up-and-Coming Comedy Kingpin