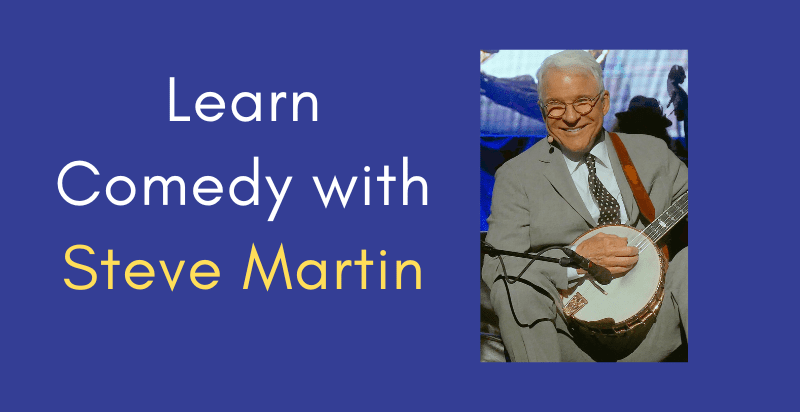 Since you are on JokesnJokes.net we know that you LOVE Comedy!

Do you want to learn how to improve your comedy skills and be funnier?

Today we have just the offer for you – Steve Martin’s MasterClass on Comedy.

“I guarantee you,” Martin begins in the course trailer, “I had no talent. None. Remember, you are a thought machine, everything you see, hear, experience is usable.”

These initial words of encouragement were comforting for someone like me with zero experience in comedy.

Before starting the MasterClass, I was eager to see if Martin could take someone like me – who is more introverted and quiet in real life – and teach me how to be funny.

I went into the Steve Martin MasterClass with realistic expectations. Obviously, I knew I wouldn’t become a comedic master after watching a comedian talk for two hours, but I wanted to know if it would help me be funnier.

Is paying for access to Steve Martin’s MasterClass on comedy worth it? Will YOU learn enough to be able to get started in comedy? Will you come away from this MasterClass funnier than before?

How much does Steve Martin’s MasterClass cost?

If you want to take Steve Martin’s MasterClass, you have three options to choose from:

Important Note: This price is for access to ALL of the MasterClasses. There are over 150 courses and this is just one of them, so the prices is about $1 per class.  You will also have access to courses by some other comedy gurus like Judd Apatow, Ron Howard, and David Sedaris.

Also, remember that each MasterClass is someone’s lifetime of work distilled into an easy to watch and understand video course. And because there are over 150 courses, its easy to find many that you will enjoy!

Here’s What is Included in Steve Martin’s  MasterClass:

This course includes over 2 hours of instruction and you will come away with a renewed understanding of comedy.

What’s included in the course?

The course includes 12 lessons that you can watch in 3 hours or les the course now stands at 12 lessons long, with each lesson comprised of roughly 3-5 subsections.

There are also a few key resources included that will help you learn to analyze comedy from other comedians too. These include:

Martin kicks off the course explaining various ways to find material for your comedy. His premise is simple: use everyday life, observe what’s around you, and be interested in a lot of things. These are basic but fundamental skills that will allow you to become funnier instantly without trying to hard.

Key Skills You Will Learn:

Steve also explores how to find your comedic voice and not become a copy of another comedian. One technique he teaches is how to create a manifesto for yourself to guide your comedy development. The hallmark of a good comedian is that people are interested in your perspective and viewpoint and how you think about situations. That is what you will learn from this course – how to see things in a funnier perspective!

Steve teaches you how to develop a comedic persona. He succinctly describes this as creating an artistic version of yourself and teaches you that  “You can be who you choose to be.”

In Lesson 5, Steve really breaks down jokes and what makes them funny. He repeatedly emphasizes the importance of performing and writing comedy constantly. He says this is the only way we can learn from our mistakes, grow our confidence, and understand ourselves as comedians. And all comedians often say this. It’s exactly what Joe Rogan has said many times on his podcast.

There is a very important lesson about jokes and bits. Steve has a different, non traditional approach to punchlines and he teaches you how to use it. In short, he teaches you how to create tension and then let the audience find a way to relieve it. This technique alone will make your wit and comedy stand out!

Is Steve Martin’s MasterClass worth the money?

If any or all of these describe you, you will definitely benefit!

MasterClass is the streaming platform where anyone can learn from the world’s best. With an annual membership, subscribers get unlimited access to instructors and classes across a wide range of subjects.

Each class features about 20 video lessons, at an average of 10 minutes per lesson. You can learn on your own terms — in bite-sized pieces or binge it all at once.

Cinematic visuals and close-up, hands-on demonstrations make you feel one-on-one with the instructors, while the downloadable workbooks help reinforce your learning. With MasterClass, you can stream thousands of lessons anywhere, anytime, on mobile, desktop and TV.

Steve Martin has worked in comedy as a stand-up, writer, and actor over the past 50 years. Some of his most notable work includes frequent appearances on The Tonight Show Starring Johnny Carson and Saturday Night Live as well as starring in films such as The Pink Panther, Father of the Bride, and Dirty Rotten Scoundrels.

Martin was raised in Inglewood, California, where his parents were working as waitresses at a restaurant. He has said that his father had a penchant for dressing up like Elvis Presley and that his mother was a fan of country music.

Martin attended Garden Grove High School and later studied philosophy at California State University, Long Beach. During his time at CSULB, he began working as a writer for The Smothers Brothers Comedy Hour. In 1967, he appeared on The Dating Game and hosted Saturday Night Live in 1975.

Since then he has become a fixture in American Comedy. His most recent hit show is Only Murders in the Building, which just completed its second season on Hulu.

Affiliate disclaimer: Any links above may be affiliate links and our diet may earn an affiliate commission.

“As soon as you start talking about comedy, it’s dead.”

It’s clear that Martin is an incredibly intelligent man. Throughout the MasterClass, Martin quotes poets, comedians, essayists, and people from various backgrounds to demonstrate his vast knowledge on his craft.

At one point he quotes E.E. Cummings and it really stood out to me: “Like the burlesque comedian, I am abnormally fond of that precision which creates movement.”

This “precision creates movement” idea, Martin says, means that the cleaner and less fluff there is to your comedy, the more your act moves for the audience. When you become aware of every consonant and vowel, you hone into what’s actually funny.

What I took away from this, and the class overall, is that comedy is a craft. It’s not the same as being the funny one of your group of friends. It takes diligent effort to become good at comedy. It also made me appreciate how much Martin is devoted to his craft.

To distill everything I learned from Steve Martin would take an entire separate blog post. Instead, in the following sections, I’ll break down things I liked and things I didn’t like about the MasterClass.

Things I liked about the Steve Martin MasterClass

Martin has a very straight forward approach to teaching comedy. He doesn’t mask the comedic process behind mystique. Rather, he says things like, “Learn to observe your thoughts” and “If two people get into a fight, let them be. That’s usable material.”

I also really enjoyed at the end of each lesson a short clip played from Martin’s old routines that emphasized some aspect of the lesson. This helped reinforce his concepts about comedy.