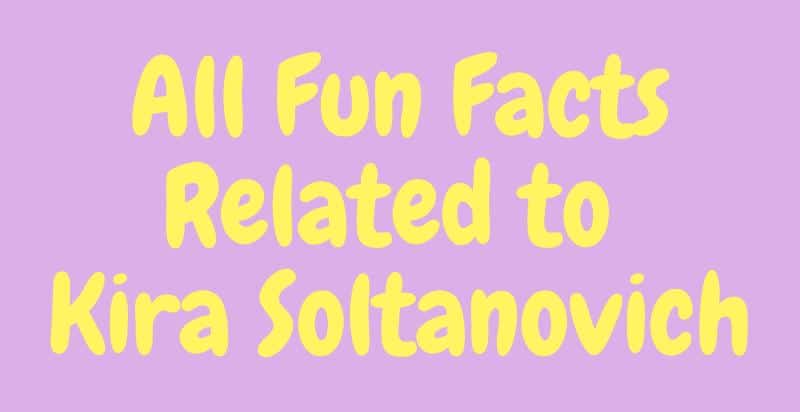 Kira Soltanovich is an internationally renowned comedian, writer, and actress who has made significant contributions to The Tonight Show with Jay Leno. She has worked on the show for nearly nine years as the Phony Photo Booth, which turned out to be a long-standing comedy piece on the show without Jay.

Recently, Kira has joined forces with Jay Leno to be the legendary duo in You Bet Your Life, which is a game show reboot on FOX.

Kira has been working on several comedy shows during her career, most of which were FOX TV shows, including The Drama and Punchline. So you can tell that her career as a comedian has been nothing short of a success story.

If you are a true fan of Kira and her comedies, you may be interested in knowing more about this legendary comedian. Read on to learn some fun facts about your favorite comedian.

The following are some of the most noteworthy facts related to Kira Soltanovich, mostly pertaining to her comedy career:

Although Kira has worked on several comedy shows throughout her career, her most significant achievement to date, according to her official website, is her role as a writer.

She is well-known in the comedy circles for writing jokes for the character of Joan Rivers on the TV series “How’d You Get So Rich” on TV Land.

2. She Has a Busy Lifestyle

In addition to her own standup specials, Kira is also the sidekick to the host of the Netflix game show, Winsanity. She is also a recurring comedian on various FOX TV shows, including The Drama and Punchline.

Kira has also appeared in 4 seasons as a series regular from the hidden camera show called Girls Behaving Badly. Her fans also remember her from NBC’s Last Comic Standing on Comedy Central.

Eddie Ifft – a stand up comedian and writer

She has also made appearances on Nickelodeon and multiple Disney shows. Her most impressive win was the moment when she was made the “prize” in Hell’s Kitchen for the winning team of chefs.

As a result, the team got to enjoy a night out at The Laugh Factory — Hollywood’s most famous comedy club located on the Sunset Strip.

4. She Won the Big Sky Comedy Festival in Montana

5. She’s Been a Comedian since a Very Young Age

Known to get in trouble more than a few times in grade school all the way to high school graduation, Kira almost always got out of getting a punishment by telling her angry principal great jokes. This is also the time she started honing her skills as a comedian.

6. She’s Writing and Producing Her Own Talk Show

She’s not only appeared on numerous television shows, movies, and podcasts but has also been writing and producing her own pieces. One such piece is her talk show Let’s Get Sweat! which takes place inside a sauna and features numerous celebrity comedians who are fully naked in the blazing hot sauna.

Her character, Kirka Parilka, interviews various celebrities on a regular basis for the show. In addition to this, she is also working on a one-hour comedy album alongside the label 800 Pound Gorilla Records.

7. She’s appeared in a Number of Television Shows and Movies along the Way

Kira, best known as a comedian, has also appeared in about 26 movies, television shows, short films, and mini-series as an actress. In addition to this, she has approximately seven writing credits to her name, as well as one director and six producer credits. Kira has made appearances approximately 54 times as herself in numerous shows, movies, and podcasts.

Don’t Tell Comedy produces weekly shows in over 45 cities in the US by transforming unique spaces like backyards, surf shops, and warehouses into locations for a one-of-a-kind comedy experience! The location is kept a secret until the day of the show, and the performers are a secret until they hit the stage. In this video, Kira Soltanovich, a hilarious comedian based in LA who has been featured on The Tonight Show, Showtime, and Netflix, shares her experience during the COVID-19 lockdown. Watch it now to witness her making the audience laugh their heads off!

The following are some of the many frequently asked questions (FAQs) about Kira Soltanovich:

Where and When Was Kira Soltanovich Born?

How Old Is Kira Soltanovich?

When Did Kira Soltanovich Start Her Comedy Career?

Kira Soltanovich has always had a knack for comedy. She started honing comedic skills at a very young age in grade school and high school, where she shared her jokes with her peers, teachers, and even an angry principal. However, she started pursuing comedy professionally after graduating from San Diego State University with a degree in theater and moving to Los Angeles.

Where Can I Get Information About Kira Soltanovich’s Shows?

Information about Kira Soltanovich’s upcoming shows, events, and other related news is available on her official website; kiracomedy.com.

Kira Soltanovich married Michael Finnegan in 2008, and she has two kids.

Kira Soltanovich was born in Lviv, Ukraine and moved to the US when she was only two years old.

She started pursuing standup comedy as a profession as soon as she graduated from San Diego State University with a degree in theater, after which she moved to Los Angeles to continue her comedy career.

In a very short span of time, Kira has earned a spot among some of the most popular up-and-coming comedians.

If you want to know more about this actor, comedian, and writer, you can follow her on her Instagram, Twitter, and YouTube accounts. Moreover, if you’re on the lookout for more comedians to watch out for, be sure to check out the links below!

More Comedians to Look Out For

Alyssa Limperis and Her Comedy Career