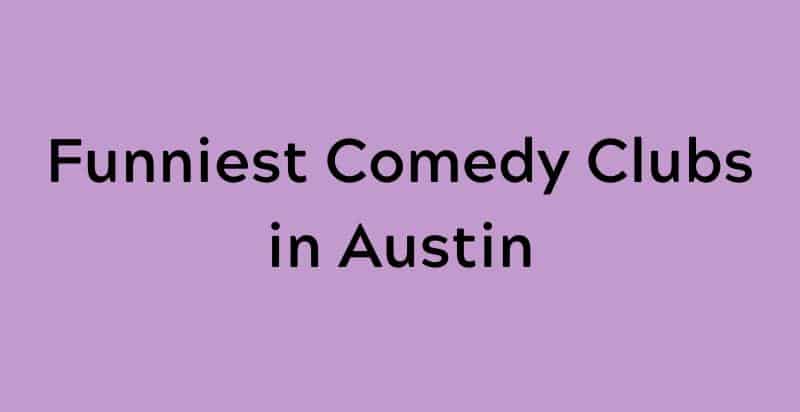 Locals and well-informed tourists know that the comedy scene in Austin is quite lively. From experienced veteran comics to up-and-coming comedians dreaming of auditioning for SNL, you can find all kinds of live acts in the city. The best quality about Austin comedians is that they are never afraid of thinking outside the box and delivering performances that might be a little unconventional.

To help you get a hearty dose of laughter and uplift your spirits, we have compiled some of the top comedy clubs in Austin, TX, which you can check out with your loved ones.

Here Are Some of the Most Incredible Austin Comedy Clubs

Situated in Downtown Austin, The Sunset Strip Comedy Club opened around 2020 and gained a lot of love from the locals. Regular showcases at the comedy club include local comics that shine on stage with their hilarious jokes and authentic sense of humor.

The club usually highlights up-and-coming comics to give them a platform to showcase their talents and skills to the audience. The performers are quite young, which makes their jokes relatable for Gen-Z and millennials and can have them chortling within seconds.

The line-up is impressively programmed to have at least twelve comedians lined up to perform every night. This arrangement ensures audiences are enjoying themselves and giggling for hours.

The Paramount Theatre is the big-shot venue in the city that has been booked by national headliners and heavy-hitters in comedy whenever they visit Austin, TX, for a show. The Paramount can accommodate more than a thousand people and has hosted shows for some of the biggest names in the industry.

Big Mouth’s Nick Kroll, The Last Podcast on the Left’s cast, Trevor Noah, and Bob Saget are just some of the comedic stars that have graced the stage of The Paramount Theatre. Just like the big acts Paramount hosts, the interior of the décor is similarly grand with velvet curtains, a beautiful stage, and great seating options.

Fallout Theater is also located in Downtown Austin and is one of the best places to visit if you want to watch good live comedy. Comedy fans flock to this location monthly or weekly, depending on the performances’ schedule, to watch some of the best comedy acts in Austin. Some of these shows include audience participation, which makes the performances much more relevant and interesting. Every Monday, there is a special showcase where audiences share anecdotes about their worst weeks as inspiration for some outstanding improv performances. It helps audiences connect as everyone laughs together and contributes to the performance.

A post shared by Slide in the DMs (@slideinthedmscomedy)

These designs invite the audience in and give them an idea of the kind of performances that can be expected at this comedy club. Esther’s Follies has been delighting audiences in Austin with variety shows for almost 40 years.

Acts presented on the stage include comedy sketches, magic tricks, political satire, and everything-in-between that is unique and a little bizarre.

Whether you are looking to watch a local comic or catch a show by a popular touring comedian, you can be sure the Velveeta Room has something exciting in store for you. The lounge is situated in Downtown Austin and has a dark interior lit by red candle holders, which can be relaxing for audiences.

Every Thursday night, The Velveeta Room offers Speed Mic, an open mic event where newbies and experienced comedians can test new material with the audience. Christina P. is also regularly available at The Velveeta Room, where audiences can watch her hilarious performances live.

Located in Central Austin, Spider House Ballroom is the best place for students to hang out after campus. It has a nice quirky atmosphere and an amazing drink selection, making it a great date spot.

The comedy shows at the Spider House Ballroom are one-of-a-kind and often have an interesting edge. “The Joke of Painting” is a weekly show that takes place every Monday and is a mix of educational lessons about art and a side-splitting comedy performance.

However, the most popular show at the Spider House Ballroom is “Stoned Vs. Drunk Vs. Sober”, where comics get under the influence and deliver their best stand-up sets in a competition. As expected, this results in a row of funny shenanigans, making audiences howl with laughter.

Shane Gillis’ debut special was recorded live at The Creek and The Cave in Austin, TX.

What comedy club did Joe Rogan buy in Austin?

Joe Rogan, a popular comedian and actor, was looking to start a comedy club near his West Austin home. However, his plans changed a bit.. Now, he will be creating his comedy club called ‘Comedy Mothership’ on East Sixth Street of Austin by renovating the historic building, the Ritz. This future club is expected to span about 5,900 feet and will be renovated by a Los Angeles-based firm.

What are some of the top-rated Austin comedy clubs?

Who are some of the most popular comedians from Austin?

Arielle Isaac Norman, Chris Cubas, Lisa Friedrich, Angelina Martin, and Bryan Gutmann are some of the most talented comics in Austin you need to check out.

As you might have noted from the diverse and exciting list of comedy clubs above, there’s no shortage of great live comedy in Austin.

With a buzzing entertainment scene, live comedy in Austin is much preferred by students and groups of friends when looking for a fun night-out idea.

Whether you are in the mood to watch some improv shows or check out new stand-up comedians on the scene, you can visit any comedy club listed above to check out which performers they have lined up for audiences for the week.

For information about comedy clubs in other cities, click on any of the links below.