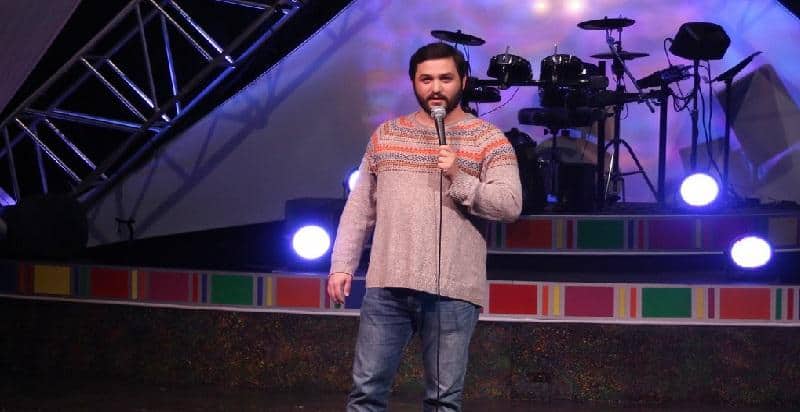 Billy Bonnell is an American writer, actor, and stand-up comedian. Originally from Cleburne, Texas, Billy Bonnell shot to fame when he began doing stand-up comedy in San Diego while still working as an electrical technician in the United States Navy.

He eventually left the military to pursue comedy full-time. Today, he’s a successful stand-up comic and has opened for other popular comedians, such as Adam Devine, David Alan Grier, Bill Burr, and more.

While Billy Bonnell has had a great career so far, there isn’t a lot of information readily available on either him or his career. He’s had some great years in the industry already but is an up-and-coming talent to watch out for as he accomplishes even bigger and better things. Read some fascinating facts about Billy Bonnell and his career in comedy below.

1. Billy Bonnell’s Comedy Career Started While He Was Still in the Navy

While Billy Bonnell is a naturally gifted comedian, this wasn’t always his career. He was always considered funny by his family and friends but didn’t pursue comedy until later in life. Instead, he joined the military.

Bonnell jokes that he escaped to the military because he considered it his only chance not to be a “religious weirdo.” While he was in the navy, he started doing stand-up comedy in San Diego.

Eventually, he decided to pursue his passion full-time after spending a decade in the U.S. Navy and moved from San Diego to Los Angeles to get more opportunities.

He credits the city with giving him his start in comedy. In an interview, Bonnell said that he didn’t know anywhere else in the country that someone could get a 45-minute set being unknown other than San Diego.

It’s no wonder that Bonnell is so fond of San Diego and his start in comedy in the city. In fact, he won the San Diego’s Funniest Person Contest in both 2010 and 2012.

This was a move that kick-started his comedy career and has propelled him to fame within his industry. Billy Bonnell was also named Comedian of the Month by SanDiego.com in February 2012.

4. He Got Into Comedy Because of Mitch Hedberg

If it weren’t for Mitch Hedberg, the world wouldn’t have ever known the hilarious comedic stylings of Billy Bonnell.

Bonnell says he wasn’t into comedy before he heard a Mitch Hedberg CD in 2002 when he was in Iceland with some friends. He says he didn’t know people could be funny like that and that it blew his mind. That’s when he first learned about one-liners, and it’s something he has embraced in his own stand-up routines.

5. The Strangest Thing That Has Happened to Him at a Comedy Show Is Unexpected

As a stand-up comic, Billy Bonnell has seen it all. However, the strangest thing that has ever happened to him is simply a woman yelling at him in Egyptian. According to the comic, he hadn’t ever heard Egyptian before, so he just assumed the woman was yelling at him in Spanish.

6. He Has Opened for Many Big Names in the Industry

Since being named San Diego’s Funniest Person in 2012, Billy Bonnell’s comedy career has exploded. He has since moved to Los Angeles and lives there full-time and has opened for some of comedy’s biggest names.

Some of the many personalities he has opened for include Adam Devine, Bill Burr, Anthony Jeselnik, Doug Benson, Jim Norton, Nate Bargatze, David Alan Grier, and Joe Rogan.

One of Billy’s biggest moves in comedy has been landing a spot on Adam Devin’s House Party on Comedy Central. Here, he captured the hearts of many and cemented his career. Additionally, he’s been seen on The CW and AXS TV.

He has also made headway when it comes to festivals and podcasts. In 2016, Bonnell was one of the headliners for the Riot Festival in downtown Los Angeles, where he performed alongside some of the most well-known personalities in comedy.

In addition to touring colleges across the U.S. and performing at illustrious comedy clubs, Bonnell loves spreading laughter through various podcast appearances.

He is also a favorite amongst podcasts and is a regular guest on The Doug Loves Movies podcast. Additionally, he’s been on The Deathsquad Podcast and the Put Your Hands Together podcast.

According to his Instagram profile, Bonnell is also in the process of creating his own podcast, The Good Hair Day podcast. In typical Bonnell tongue-in-cheek humor, he has teased that it’s “A podcast that has nothing to do with hair. Surprisingly.”

Billy Bonnell became a household name after his appearance on Adam Devine’s House Party on Comedy Central, but he’s not just limited to performing. A lot of his comedic career has also focused on writing. In fact, he has written extensively for Comedy Central’s digital lab.

Bonnell knows that for many people in comedy, the goal is to become famous. However, he’s never been interested in that. In a 2012 interview, Bonnell said he wants to be paid for what he does.

He thinks the highest honor is for people to enjoy his comedy so much that they keep coming back to see him and deem him worthy of spending their hard-earned money on him.

Almost 10 years ago, Bonnell’s goal was to make a living from his craft. He’s done just that since he has been thriving in the industry since his humble beginnings.

What Lying Was Like in the 90s – Billy Bonnell

Billy Bonnell explains the difference between lying now and lying in the 90s, and doubts the safety of energy drinks.

Billy Bonnell is one of the funniest people in the comedy industry right now and has received national acclaim for his witty one-liners and tongue-in-cheek humor. He’s known for his laid-back style, his Southern drawl, and his ability to turn everyday events into hilarious anecdotes, thanks to his amazing storytelling skills.

In addition to his being the Funniest Comedian in San Diego multiple times, he has also been called out as Fresh Face to look out for by the Laugh Factory. With all this in mind, it’s an understatement to say that Billy Bonnell is a great up-and-coming comedian that everyone should know more about.

Other Up-And-Coming Comedians You Should Check Out:

Image Credit – “Tonight in San Diego” by tim ozbun photography is licensed under CC BY 2.0