So Many Meditation Jokes 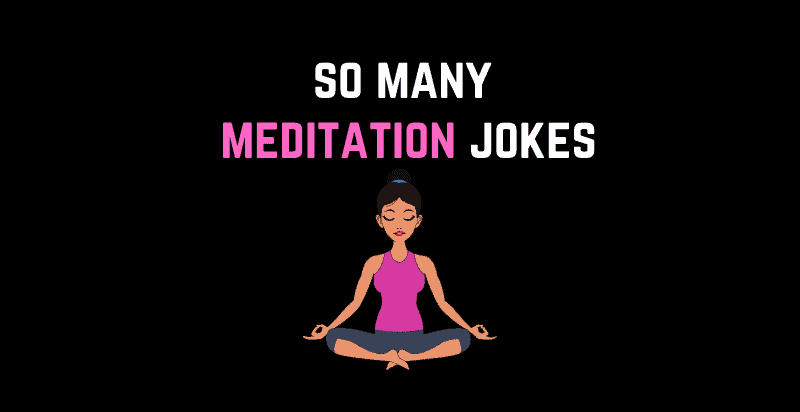 Meditation is a practice that has been around for thousands of years. It is a powerful tool for personal development and self-awareness. There are many benefits to meditation, including stress reduction, improved focus and concentration, reduced anxiety and depression, increased creativity, and improved sleep quality.

Meditation has been around for centuries and it’s been studied by many scientists. Studies have shown that meditation can help with physical health issues like pain management, heart disease, cancer recovery, and even high blood pressure. Meditation has also been linked with improved mental health such as reduced anxiety and depression symptoms.

There are many funny jokes about meditation, and we have the best ones for you today. Enjoy!

Why don’t Buddhists vacuum in the corners?
Because they have no attachments.

So, I hear reincarnation is making a comeback.

Why are politicians proof of reincarnation?
You just can’t get that screwed up in one lifetime.

What did one Buddhist Master give to the child for his birthday? Nothing wrapped in Emptiness.

What did the Buddhist say to the sandwich vendor at the ball game?
Make me one with everything!

After the man received his sandwich, he gave the vendor a $20 bill. The vendor just smiled. The man, infuriated, demanded, “Where is my change.” The vendor replied, “O, one with everything, change comes from within.”

What did the Buddhist tell the door-to-door salesperson who came to his home selling vacuum cleaners?
Too many attachments!

Did you hear about the new low-fat religion?
“I Cant Believe Its Not Buddha”

What happens when a Buddhist becomes totally absorbed with the computer he is working with?
He enters Nerdvana.

What did the sign in the monastery searching for new monks say?
Inquire within!

The Master: I’ve never met someone so thoughtless in my life. Keep up the good work. The desciple: Thank you Master I didn’t believe in reincarnation the last time, either. I hear the Dalai Lama recently fired his gardener, who had a degree in carnations but didn’t dig reincarnations. My karma ran over my dogma….’

Why did the noble gas do meditation?
He wanted to get his xen-on.

Why does meditation get so much resistance?
Because there’s too many Ohms.

What is the name of the best Zen teacher?
M.T. Ness

How many Zen buddhists does it take to change a light bulb?
None, they are one with the light bulb.

What happens when a Buddhist becomes totally absorbed with the computer he is working with?
He enters Nerdvana.

What do you get when you cross a Jehovah’s Witness and a Zen Buddhist?
A person who knocks on your door for absolutely no reason at all.

What did one Zen practitioner give to another for their birthday?
Nothing.

A meditation student asked his teacher, “Am I allowed to send you email?”
“Yes,” replied the teacher, “But no attachments please.”

Why do mindfulness students love going to airports?
Because they always get a free body scan!

A monk was driving in India when suddenly a dog crosses the road. The car hit and killed the dog. The monk looked around and seeing a temple, went to knock on the door. A monk opened the door. The first monk said: “I’m terribly sorry, but my karma ran over your dogma.”

A young monk arrives at the monastery. He is assigned to helping the other monks in copying the old canons and laws of the church by hand.

He notices, however, that all of the monks are copying from copies, not from the original manuscript. So, the new monk goes to the head abbot to question this, pointing out that if someone made even a small error in the first copy, it would never be picked up! In fact, that error would be continued in all of the subsequent copies.

The head monk, says, “We have been copying from the copies for centuries, but you make a good point, my son.”

He goes down into the dark caves underneath the monastery where the original manuscripts are held as archives in a locked vault that hasn’t been opened for hundreds of years. Hours go by and nobody sees the old abbot.

His forehead is all bloody and bruised and he is crying uncontrollably.

With A choking voice, the old abbot replies, “The word was… CELEBRATE !!! ”