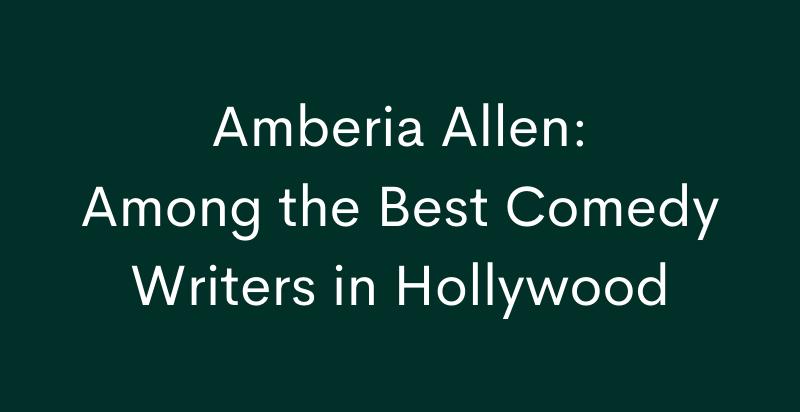 Amberia Allen is a writer, actor, and comedian, who has been paving her way with her talent for a little over a decade now. Her career as a writer is more prominent since she has been working on various shows including The Last O.G. and The Wonder Years. However, it’s her comedic timing that earns her the status of an up-and-coming comedian.

Allen uses her wits and love for comedy to write for the TV shows. She also partakes in social media activities, actively sharing her life as a comedian and a writer. If you have heard of Amberia Allen before but never got a chance to know her, here is everything you should know about this outstanding and talented woman!

1. High School Brought Winds of Comedy to Her Door

Amberia Allen always had a knack for cracking a joke, but she never really considered comedy as ‘something to pursue’ until high school. She is a California native who started enjoying stage performances and participating in competitions towards the end of her teenage years.

She would participate in Humorous Interpretation competitions and represent her high school. Allen was a part of her school’s Speech and Debate team, so it was a good opportunity for her to test the waters and see how comedy could become a part of her life.

2. She Knows How to Find Humor in Her Everyday Life

Comedians who join the stage after years of struggle and hard work know how to use moments from the past for people’s entertainment. Many standup comedians use their personal characteristics and lifestyle to draw inspiration for writing humorous scripts. Amberia Allen is no different because she has enough material to talk about in her skits!

She is from a small town, so there are enough life stories to share with her audience. Allen is also a Sociologist with a Ph.D. and living a life as a married woman—both statuses giving her inspiration to write humorous content.

3. Amberia Is Fond of the West Coast

For standup comedians who are making their way into the entertainment industry, there are two main options: Los Angeles or New York. Some up-and-coming comedians settle down in New York, finding gigs regularly to make a name for themselves. While others get the opportunity to find a place in Los Angeles, CA, and settle there.

Amberia Allen is part of the latter kind. She is pursuing her career in comedy while navigating life in LA. Her writing is super funny and captivating, which is why she has been a part of many productions as a staff writer or story editor.

4. Her Life on Television Is Full of Opportunities

Amberia Allen participated in 2014’s Comedy Wings competition and emerged as a winner. That was the start of a career in comedy that she always wanted! Allen appeared on the season of We Got Next by Aspire TV in the same year and shared her talents with a bigger audience. She presented her comedy content about ‘what makes a wifey material.’

2015 brought The Xperiment into Allen’s life, and she got to co-host it. Yet, the most prominent appearance on television has been The Late Show with Stephen Colbert. In 2018, Allen appeared in an episode of Stephen Colbert’s late-night show with Mindy Kaling and Chris Hayes.

Amberia Allen has also appeared on Truth Serum with Aida Rodriguez. She was a guest on the show in 2020, matching her skills as a comedian with that of Aida Rodriguez. The rest of her television work showcases her talent as a writer or actor.

5. Amberia Allen as a Writer for Award Shows

The up-and-coming comedian has more writing credits to her name than you’d expect. She is a performer, so she always writes her own stuff for shows and stage performances, but did you know Amberia Allen is a recognized award show writer? Her refreshing take on host scripts has added many awards shows to her credit list.

6. She Is a Mentor for Those Seeking to Pursue a Career in Hollywood

As a comedian, Amberia Allen has grown so much since the first time she participated in a competition as a high school student. She went on to participate in competitions on the television and write for the award and tv shows that garnered respect and appreciation for her work. Through it all, she also got a Ph.D. where her focus was on gender and race.

In one of National Agenda’s Midterms Matter speaker series’ installments, Allen expressed her opinion about why humor matters in the era that we are living in. She encouraged the students to pursue a serious issue in the world by focusing on every aspect of that event using a humorous tone. It helps shed light on a serious matter by stopping people from avoiding the issue.

When students shared their curiosity about becoming a part of Hollywood, she confidently told them to find a mentor. Allen believes that navigating Hollywood without mentorship or networking is next to impossible. She also said to be ready whenever the call comes so that you do not miss an opportunity.

7. She Used Her Talent for Comedy to Revive The Wonder Years

Amberia Allen has been an advocate for race and gender in the entertainment industry for years. She even got her Ph.D. with the same focus and now uses her talent as a comedian to write better scripts for a diverse audience. One of her prominent works in this manner has been the revival of The Wonder Years.

It is a show from the late 80s that shows how an American teenager in the era of the 60s navigates life. The reason to reimagine the show in 2021 was to provide a perspective of a black kid in the 60s. The original series was not diverse, which is the reason it needed a reboot in 2021.

Amberia Allen was the story editor on the show and also wrote a few episodes. We have to say that she did a tremendous job in showcasing the life of a black teenager growing up in America in the 60s.

This is not the only show where Allen uses her humor to entice the audience and shed light on a serious matter. She has taken to the stage many times to bring attention to the people of color and how they fit in the society that America imagines.

Standup comedian Amberia Allen can describe marriage in one word…followed by another word that’s exactly the opposite. Watch her charm the audience with her talent on The Late Show with Stephen Colbert.

Amberia Allen has shared her talent with the entertainment industry for many years. She is an exceptional writer with perfect comedic timing, which is why she has been part of television and award shows as a writer and story editor. We hope this article will help you see the true talent of Amberia Allen, who makes her audience and fans happy with a fresh take on life!