Running Jokes to Make You Laugh! 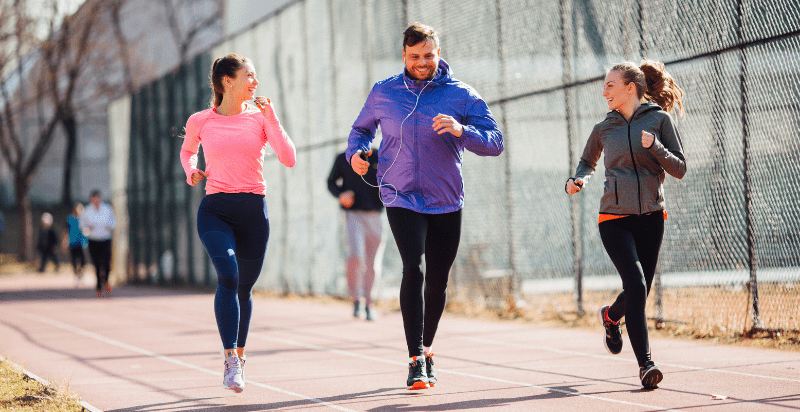 Running is a lot of work – time, effort, sweat and even sometimes tears. It helps to have a little humor to help you get through the monotony and pain of running. We have the funniest jokes that are about runners, running, jogging and even races like marathons.

So, without further ado, here are the best jokes about running and jogging. Memorize a couple and share with your friends next time you are out for a jog!

The Funniest One Liner Jokes about Running and Jogging

How do crazy runners go through the forest? They take the psycho path.

Why was the blonde jogging backwards? She wanted to gain weight!

What do you call a 13 year old girl from Kentucky who can run faster than her six brothers?  A virgin.

How do you know when you’ve married a running enthusiast? When you have more running clothes than regular clothes in your laundry pile.

Who is the fastest runner of all time? Adam, because he came first in the human race!

If twenty monkeys run after one banana, what time is it? Twenty after one!

What do you get when you run in front of a car? TIRED

What do you call a free treadmill? Outside.

What do you get when you run behind a car? EXHAUSTED

What do you do when a blonde throws a pin at you? Run! She’s got a hand grenade in her mouth.

Why doesn’t Mexico have a competitive Olympic team? Because everybody who can run, jump and swim are already in the United States

Why did the chicken run across the road?  There was a car coming.

Why can’t you let a jogger be a potential juror? Because you’ll have a runaway jury.

What’s the difference between the Arizona Cardinals & the Taliban?  The Taliban has a running game.

Why do dogs run in circles? Because its hard to run in squares!

How do you know your a dedicated runner? When your treadmill has more miles on it than your car.

Why do runners go jogging early in the morning? They want to finish before their brain figures out what they’re doing.

If runners get athlete’s foot what do astronauts get? Mistletoe?

Why did the vegetarians stop running cross country? They didn’t like meets!

What race is never run? A swimming race.

What do you call running while listening to your favorite rapper? A Snoop Jogg

What does a runner drink when she is in last place?  Ketchup.

Did you hear about the marathon runner who ran for three hours but only moved two feet? He only had two feet!

Why can’t you take a nap during a race? Because if you snooze, you lose!

How did the barber win the foot race? He took a short cut.

Why did the trainer want her client to work out where it was sunny? So she would feel the burn.

What do you call a competitive runner who just broke up with his girlfriend? Homeless

What kind of running shoes are made from banana skins?  Slippers.

What do runners do when they forget something?  They jog their memory

What do a dentist and a track coach have in common?  They both use drills!

Why are Scandinavians considered to be the best runners across the globe? Because they start near the Finnish line.

Why was the runner in the marathon stopped and taken to jail? He was resisting a rest.

What did a runner’s wife give him when he came home all sweaty? She gave him the stink eye.

Do you know who invented running marathons? The human race.

Why were pets not allowed to compete in the marathon? Because they are not part of the human race.

The Most Hilarious Jokes from Laffy Taffy Wrappers

Why do runners refuse to take a nap during a race? Because if you snooze, you lose.

Why do birds go running early in the morning? Because the early bird gets the worm.

What do athletes eat before a race? Nothing. They fast.

If you refuse to go running one day, what type of training are you doing? Resistance training.

What do you call a couple that runs a marathon without leaving each other’s side? Running mates.

Jane had been driving 16 hours straight and was still at least six hours away from her destination. It was almost eight o’clock in the morning and she was very tired.

After dozing off and nearly crashing into a telephone pole, she decided to pull onto a side road and rest.

Jane turned off the car and closed her eyes … drifting off to sleep, precious sleep …

When an old man in a bright blue jogging suit knocked on her window, scaring her half to death.

“Sorry to wake you,” he huffed, jogging in place. “But can you tell me what time it is?”

The old man thanked her, then left.

With a sigh, she settled back into her seat and tried to fall asleep.

Two male joggers in their thirties knocked on her window. If she hadn’t been dead tired, she would have found them cute.

Now, they were just annoying.

“Do you have the time?” his brown-haired friend asked.
Jane sighed and looked at her watch. “8:19,” she said.

“Thanks,” they said, then jogged off.

Jane looked down the road and saw more joggers coming her way. Irritated, she retrieved a pen from the glove box and scrawled ‘I DO NOT KNOW THE TIME’ on the back of a magazine.

She put the hastily constructed sign in the window and settled back to sleep.

A thin, pale jogger knocked on the window just as she started dozing off.
Jane pointed at the sign and shouted, “Can’t you read?”

The Joy of Jogging

1. For every mile you jog, you add one minute to your life. This enables you, at the age of 85, to spend an additional five months in a nursing home at $5,000/month.
2. The only reason I took up jogging was to hear heavy breathing again.
3. I joined a health club last year, spending $400 in the process. I haven’t lost a pound. Apparently you have to show up.
4. I have to exercise early in the morning, before my brain figures out what I’m doing.
5. I like long walks, especially when they are taken by people who annoy me.
6. The advantage to exercising every day is that you die healthier.
7. I have flabby thighs but fortunately my stomach covers them.
8. If you are going to take up cross-country skiing, it helps to start with a small country.
9. I don’t jog; it makes me spill my milk shake.
10. Actually, I don’t exercise at all. If we were meant to touch our toes, we would have them farther up on our body.