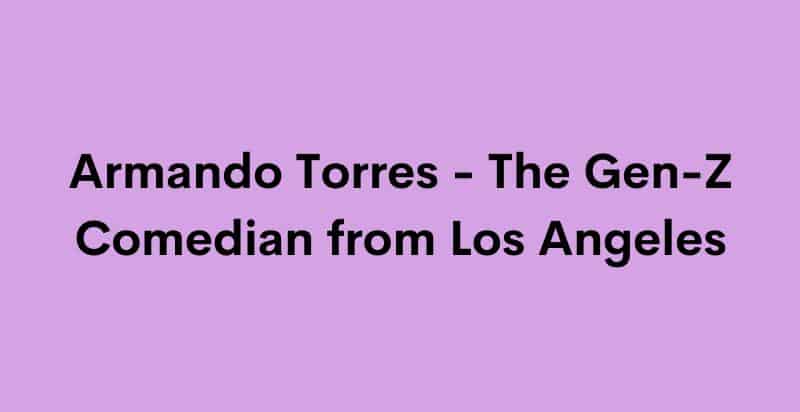 Armando Torres is a multi-talented comedian who is an actor, producer, writer, and podcast host. He has a background in theater and improv, which allowed him to be a natural on stage when he began performing stand-up. Armando is a talented comedian who does not shy back away from challenges and has been transitioning towards greater platforms (film and television) to further his career. He also regularly tours the country and performs hilarious stand-up shows in locations all over the country.

He is a self-proclaimed “idiot” and has a dark and edgy sense of humor that relates much better with the Gen-Z and millennial generations. He has been invited and booked to perform at various venues all over the country, such as colleges, clubs, and even casinos. Armando has even performed at Outside Lands in 2021 and has been a tremendous comedic star at the San Francisco Sketchfest. Armando Torres has also taped a comedic set for the third season of Laugh After Dark. Laugh After Dark is a comedy show on Amazon Prime that has received raving reviews from viewers.

Currently, Armando Torres is working as a producer on Funhaus, where he collaborates with multiple comedians, producers, and writers to create hilarious podcasts and work on other goofy and creative projects such as Rooster Teeth’s Last Laugh and more. Armando Torres also hosts a podcast in his own time that has been received exceptionally well by the public. It has also been featured in A24, Popsugar, O Magazine, and Vulture.

If you have watched any of his stand-up videos online or want to know more about the sweet LA comedian who is spectacularly multi-talented, you can read the following facts for more information about Armando Torres.

Astonishing Facts about Armando Torres You Need to Know

1. Armando is a producer at Funhaus

Armando is a critical part of the YouTube channel called Funhaus. He is a creative producer at the channel, where he comes up with new ideas for videos and goofs around with his friends in podcasts and fun ideas for shows. Funhaus is an American entertainment, gaming news, and video-gaming YouTube channel that is owned by Rooster Teeth.

Will Miles – Learn about This Rising Comedy Star

2. He is one of the leading producers for Cult Podcast

Armando is the main producer of the podcast Cult Podcast. The Cult Podcast is a podcast where the two main hosts, Armando Torres and Paige Wesley, discuss different cults.

Each episode of the podcast releases on Monday and contains goofy and hilarious jokes about the terrifying reality of cults. The podcasts begin with the pair of hosts discussing a new group of fanatics and their incredibly powerful yet crazy leaders.

The Cult Podcast has covered cults and cult leaders like Charles Manson (the compelling and influential leader of the Manson family), the Bundy Standoff, Herff Applewhite, and Bonnie Nettles (leaders of America’s most famous cults called Heaven’s Gate), and many more.

3. He was featured in a role in Dark Wolf Gang

Armando is not just a hilarious comedian but has experience in theater and stage performance. Owing to his incredible acting talent, he was offered a part in Dark Wolf Gang as a character called Gizmo.

The movie was released in 2017 and also received multiple nominations for awards. The movie won two awards for Best Editing while it was nominated as the Best Short Film at New York Latin Film Festival as well as the LA Shorts International Film Festival.

4. His stand-up comedy videos are highly popular on TikTok

Armando Torres is a famous stand-up comedian online. He has amassed over 334K followers on TikTok and a little less than 10,000 followers on Instagram. He is a budding comedian who is famous among the Redditors for his incredible and relatable sense of humor.

Armando’s video titled “How They Define Gen Z…” was incredibly popular on TikTok and was loved by a massive number of fans. The video gained around 8 million views and 2.4 million likes. Other videos like “Being a Bigger Dude Problems…” and “the Cholo Haircut” videos also got over 1.5 million views, which is fantastic for a comedian just starting out on the platform.

5. He is a considerably younger comedian with a notable social media presence

Armando Torres is a younger comedian compared to most people in the industry. He is a Gen-Z comedian who is super talented and has made it in the industry relatively young for his age. Armando isn’t afraid to make edgy jokes or be vulnerable with his fans which have allowed him to build a great relationship with his audience. Armando is open about his insecurities in his comedy and often pokes fun at himself, which makes the audience laugh with him instead of laughing at him.

Armando Torres is quite active on social media platforms such as Instagram, Twitter, and TikTok. On Twitter, he has posted some promotional posts about his upcoming projects or work that he has been collaborating over.

6. He has completed shows in various stand-up clubs

Armando has been requested to perform at several comedy clubs all over the country. He often posts about his upcoming shows on his social media platforms, where his fans interact with him before the show and regarding forthcoming dates. Armando has performed in various comedy clubs, casinos, and colleges all over America and has been a part of SF Sketchfest in 2020 and Outside Lands in 2021.

7. He has done shows after dropping acid and taking shrooms

Armando isn’t shy to admit that he has smoked marijuana and done other drugs before performing live at a comedy club or another location. He is a confident comedian who allows his even funnier side to take over with the influence of drugs and makes audiences laugh with incredibly whimsical and goofy jokes.

At Gateway Comedy and in a show in Portland, Armando Torres admitted he had taken acid before performing a side-splitting set about how a cat was a murderer since it killed a mouse, but people like himself and the audience were unfazed by it.

This week Armando Torres of Cult Podcast drops in to discuss cults, why we love true crime, and the girl scout cookie mafia, plus all the games we’re playing and looking forward to in a round of ‘One for Now, One for Later’!

Armando Torres is a highly talented comedian who has been producing comedy shows and podcasts, co-hosting them, and writing for shows. He is currently a producer on Funhaus and also a producer on the Cult Podcast.

If you want to learn more about comedians like Armando Torres, click on any of the following links.