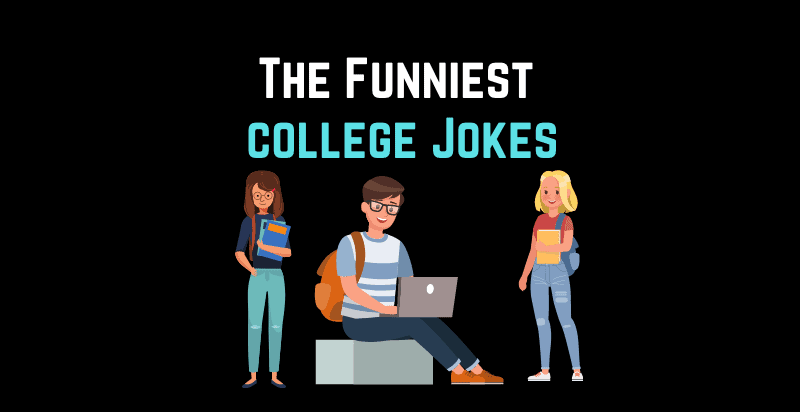 There is something that is very relatable to the college experience of dorm life and everything else we think associate with college and receiving an undergraduate degree.

Odd professors, getting by on Ramen noodles and studying hard – all part of the process.

College is a great time and also full of stress. We hope you can release some stress and laugh a bit at our hilarious college jokes. Enjoy!

It was the final examination for an introductory English course at the local university. Like many such freshman courses, it was designed to weed out new students, having over 700 students in the class!

The examination was two hours long, and exam booklets were provided. The professor was very strict and told the class that any exam that was not on his desk in exactly two hours would not be accepted and the student would fail. 1/2 hour into the exam, a student came rushing in and asked the professor for an exam booklet.

“You’re not going to have time to finish this,” the professor stated sarcastically as he handed the student a booklet.

“Yes I will,” replied the student. He then took a seat and began writing. After two hours, the professor called for the exams, and the students filed up and handed them in. All except the late student, who continued writing. 1/2 hour later, the last student came up to the professor who was sitting at his desk preparing for his next class. He attempted to put his exam on the stack of exam booklets already there.

“No you don’t, I’m not going to accept that. It’s late.”
The student looked incredulous and angry.

“No, as a matter of fact I don’t,” replied the professor with an air of sarcasm in his voice.

“DO YOU KNOW WHO I AM?” the student asked again.

“No, and I don’t care.” replied the professor with an air of superiority.

“Good,” replied the student, who quickly lifted the stack of completed exams, stuffed his in the middle, and walked out of the room

What do you call an advanced degree in sensationalistic journalism?
A doctor-it degree.

What do you get for a friend who is graduating from Law School?
A Lobotomy.

Did you hear about the dyslexic lawyer who studied all year for the bra exam?