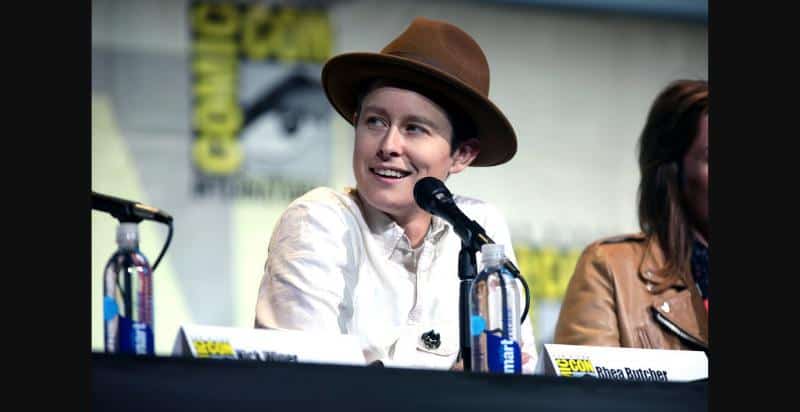 Rhea Butcher is a famous American comedic writer, producer, actor, podcast host, and brilliant standup comedian. Butcher is renowned for their personal and unique comedy style, which focuses mainly around their own attributes such as their love of baseball, feminism, their being a vegetarian and their experiences being gay.

The comedy star originates from Akron, Ohio and currently resides in Los Angeles, California. They have appeared and performed on many well-known talk shows, stages, clubs, web series, and podcasts. Even so, many of their fans are unaware of their personal life and experiences. This article will take you over the 10 most astonishing Rhea Butcher facts that you probably haven’t heard before.

The 7 Most Surprising Facts about Rhea Butcher

1. Rhea has a Unique Comedy Style

Butcher has a completely unique and unprecedented comedy style. Their jokes are mainly centered around their love for baseball, being a vegetarian, their haircut and wardrobe, their Ohio origin, and their experiences as a gay non-binary. The comedy style is light, fun, and lucid which has allowed them to garner a considerable fan following and acknowledgement from fellow comedians.

2. Rhea Butcher was a guest on The Ellen DeGeneres Show

The Ellen DeGeneres Show is a super hit American comedy talk show that has garnered a staggering 61 Daytime Emmy Awards and has been nominated for the said awards 166 times.

On Friday, the 19th of December, 2019, Rhea Butcher was a guest invited to the show, where they performed a comedy set. The non-binary comedian brought non-binary humor across the living rooms of America.

Late Night with Conan O’Brien is an American comedic late-night talk show hosted by performer, writer, and comedian Conan O’Brien. The show debuted on the 8th of November, 2010 and has always been quite a hit for its bold and clever script with prominent celebrity guests featuring in different episodes.

In the late August of 2016, Butcher was invited as a guest on the show. This was Rhea’s first-ever late-night talk show standup performance. Butcher did really well on their debut and made some remarkably comedic jokes on their last name and on being a vegetarian.

4. Rhea is influenced and inspired by several well-known comedians

In an interview, Butcher acknowledged that their comedic inspirations were immensely influenced by some well-known comedic celebrities such as Brett Butler, Ellen DeGeneres, Maria Bamford, Rosie O’Donnell, Elayne Boosle, and Paul F. Tompkins.

5. Rhea Began Their Journey as a Comedian from Chicago

Butcher began their journey as a standup comedian in the city of Chicago. They performed improvised standup comedy scripts at numerous clubs such as the jukebox, Zanies, Chicago Underground Comedy Club, Zanies, The Lincoln Lodge, Meltdown, The Hideout, Cole’s, and UCB. These performances helped them kick start their career and get acknowledged as a standup comedian.

6. Rhea starred in, hosted, and co-hosted some very popular shows and podcasts

During the fall of 2014, Rhea was featured in numerous scripts for a show called “Ask a Lesbian” produced by BuzzFeed Motion Pictures. Her co-star in these clips was Cameron Esposito, Rhea’s future wife. Soon after, the duo – Butcher and Esposito, co-hosted a web series known as “She Said” by the Smart Girls Network owned by Amy Poehler. Butcher was also a co-host on a standup comedy podcast called Put Your Hands Together. The podcast continued up till July of 2019.

Moreover, Butcher and Esposito co-wrote and starred in a series called Take My Wife, which aired on a comedy streaming service called Seeso. Butcher also released their first standup comedy album in August of 2016, which was called Butcher. This was achieved in association with an independent record label known as Kill Rocks Stars. The album premiered on iTunes at the number one spot. The comedy set was performed in Portland, Oregon, at the Mississippi Studios.

Furthermore, Butcher was also cast for the 2016 series Adam Ruins Everything. However, Rhea appeared in only the first season and even that in just eight episodes. Surprisingly, they returned for one more appearance on the show in 2017. In 2018, Butcher moved on to hosting Three Swings – a podcast focused and based around baseball.

Rhea has had quite a long and difficult journey to figuring out what their identity is. While Butcher does not identify as transgender, they were frequently mislabeled as a man. However, Butcher finally came to terms with their identity in a quite bold and public manner. On the 30th of March of 2018, Butcher tweeted, stating that people should use the pronouns they, them, and there when addressing Rhea. This signified that Butcher firmly identifies themself as Non-Binary.

What are Rhea Butcher’s pronouns?

Rhea Butcher publicly announced on Twitter that they/them/there are the pronouns that a person should use when addressing Rhea.

What is Rhea Butcher’s actual name?

Butcher’s name at birth was Rhea Harriet Butcher. However, in November of 2021, they announced that they had changed their first name to River. Therefore, their official name is now River Butcher, yet they are still more commonly known as Rhea Butcher, with very few people knowing and using their actual name.

When was Rhea Butcher born?

How tall is Rhea Butcher?

Rhea Butcher, officially known as River Butcher, is an American standup comedian, producer, actor, and writer who has an estimated height of 177.8 centimeters or 5’10”. However, this is just an estimate and has not been confirmed.

Who is Rhea Butcher’s wife?

On the 12th of December, 2015, Rhea got married to a fellow comedian known as Cameron Esposito. The two have co-hosted, co-written, and co-starred in many standup albums, podcasts, and web series. However, the couple has been on a break since 2018 yet they haven’t been divorced.

Standup comic, actor, and writer Rhea Butcher co-created and starred in the critical hit TV series, Take My Wife, and their debut comedy album, Butcher, reached the top of the comedy charts. Rhea also hosts the popular live show and podcast, Put Your Hands Together, and their new podcast Three Swings takes an unconventional look at America’s pastime.

Rhea Butcher is a talented comedian who struggled to uncover their true identity all the while trying to cope with societal discrimination. It is safe to say that their life has been quite a roller coaster ride. However, steadily and gradually, Butcher managed to overcome their troubles.

Her experiences will surely have molded them into a strong and ambitious individual. After all, rough seas make good sailors. On a final note: be sure to check out Butcher’s standup shows and podcasts if you haven’t already; you’ll surely love it.

Here Are Some Other Comedians to Keep an Eye Out For!

Solomon Georgio Gets All the Laughs