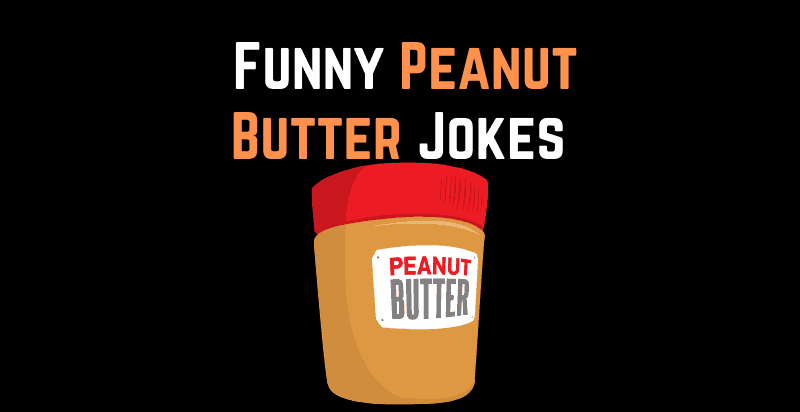 Also our collection is perfect for National Peanut Butter day, which is on January 24th. Don’t forget to spread them!

I was given a bag of peanuts which was blessed by the Pope….
I gave them away. I hate religious nuts.

Did you hear the joke about the peanut butter? I’m not telling you. You might spread it!

How is a dumb blonde like peanut butter? They spread for the bread.

Why did the girl smear peanut butter on the road? Because she’s nuts! What did applesauce say to peanut butter? You’re Nutty!

Why did the swimmers put peanut butter into the sea? To go with the jellyfish!

What kind of sandwiches do sharks eat? Peanut butter and Jellyfish. Why did the blonde smear peanut butter on the road? To go with the traffic jam.

Why can’t you be friends with a jar of peanut butter? They make everyone nutty.

What drink goes with a peanut butter and jelly sandwich? Nut-Tea.

Q: Who answers the door at the nut house?
A: The peanut buttler.

What did the jelly say to the peanut butter?
Answer: We make a good match!

Q: Why did the elephant cross the road?
A: To get to the peanut.

Q: Where do peanuts get their energy?
A: A Shell station.

Q: What do they feed to the craziest bank robbers on their court day?
A: Pleanut butter.

What do you call a sandwich full of envy?
Peanut butter ‘n’ jealousy.

I once got in a rap battle with a peanut.
He was roasted.

Why did Mr. Peanut go to the hospital?
He was a salted

What did the aggressive walnut say to the group of peanuts?
You better hope I don’t cashew outside!!

How are peanut butter and jelly related?
They’re inbred

Why did the man smear peanut butter on the road?
To go with the traffic jam.

What’s the difference between girls of our generation and peanut butter?
One spreads easily and the other is peanut butter

Did you hear the rumour about peanut butter?
You shouldn’t spread it.

What did the peanut say to the moon?
Nothing.. Peanuts don’t speak..

What do you call a prison for peanuts?
# A peanutentiary.

When do peanuts laugh?
When you crack them up.

Why did the peanut never come to school?
Because everyone was allergic to him.

Why did the man with the peanut allergy die in prison?
He was sentenced to the nuthouse.

What did Mr. Peanut say to Mrs. Peanut as he left the house?
Back in a Jif!

Q: Who answers the door at the nut house?
A: The peanut buttler.

Q: Why are peanut butter jokes never kept a secret?
A: Someone always spreads it around.

Q: How does peanut butter communicate?
A: Sticky-Notes.

Q: What did the grape say to the silly peanut butter?
A: You’re nuts!

Q: Why did the elephant cross the road?
A: To get to the peanut.

Q: Why did peanut butter donate to the high school booster club?
A: It’s Pro-Teen.

Q: Why did the peanut run across the busy highway?
A: It was nuts.

Q: What makes a traffic jam better?
A: Adding peanut butter to it.

Q: Where do peanuts get their energy?
A: A Shell station.

Q: What do they feed to the craziest bank robbers on their court day?
A: Pleanut butter.

Q: What do lawyers put on sandwiches?
A: Plea-nut butter.

Q: Why couldn’t the peanut butter afford a sandwich?
A: It needed bread.

Q: Wanna hear the secret joke about peanut butter?
A: Never mind, you might spread it…

Q: What did Linus but on his crackers?
A: Peanuts butter.

Q: Why did the man smear peanut butter on the road?
A: To go with the traffic jam.

Q: What did the guest say when it went to the peanut butter’s dinner party?
A: Nice spread…

Q: Why did the surfer put peanut butter on his surf board?
A: To go with the jellyfish.

Q: Why couldn’t the peanut finish the project?
A: Work came to a grinding halt.

Q: What do they call a peanut on the International Space Station?
A: An astronut!

Q: What did the nutty baseball team need for their squeeze play?
A: Peanut Bunter…

Q: Why can’t you be friends with a jar of peanut butter?
A: They make everyone nutty.

Q: Why was the peanut butter upset about his retirement party?
A: He was roasted!

Q: What did the mommy say when her son asked for a peanut butter sandwich?
A: I’ll make it in a Jif.

Q: What competition do peanuts participate in?
A: The peanut butter cup.

The Best Elephant Jokes Ever!

Q: What did the peanut say to the elephant?
A: Not a thing… peanuts can’t talk!

Q: What kind of sandwiches do whales eat?
A: Peanut butter and Jellyfish.

Q: What did the pecan say when he saw the food at Peanut Butter’s party?
A: Nice spread…

Q: How do you catch an elephant?
A: Act like a peanut!

A Man Walks into a Bar

A man walks into a bar and orders a drink. After sitting for a few minutes, he hears a voice say, “nice tie.” He looks around but doesn’t see anybody near him and so he forgets about it.

Some time passes and he hears the same voice say, “nice shirt.” This time he looks everywhere; behind him, up and down the bar, under the chair, behind the bar, everywhere he can think to look, but he doesn’t see anyone.

A few minutes later he hears, “Nice haircut.” He can’t stand it any more, so he calls the bartender over and tells him he has been hearing this voice but can’t figure out who is speaking.

I told my girlfriend I was breaking up with her because she had peanut butter legs. She asked “What do you mean?” I said “Your legs are nice and smooth and easy to spread like peanut butter.”

After a minor mathematical error on a routine report, a worker’s boss tried to belittle him in front of his peers. Angrily she asked, “If you had 4 jars of peanut butter and I asked for one, how many would you have left?” Quickly he replied, “If it was you who asked, I’d still have 4 jars.”