The Most Hilarious Gorilla Jokes! 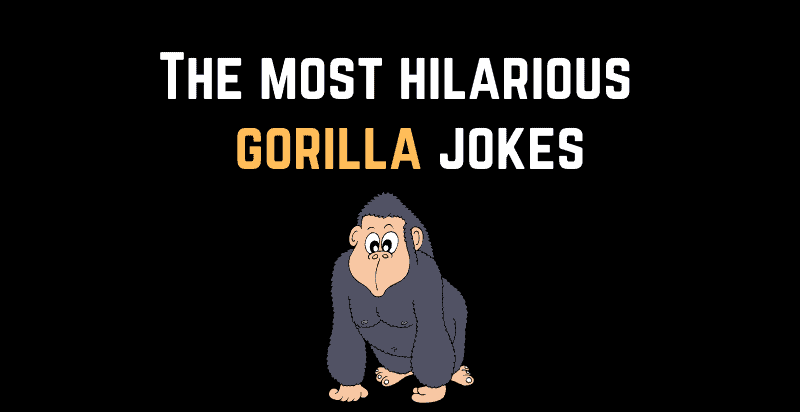 In the world of comedy, there is nothing funnier than a gorilla joke. However, gorillas don’t find them very funny at all.

I always get sad when I watch videos of gorillas using sign language to ask for food.

It’s a shame there are so many deaf gorillas.
What do you call a gorilla with a banana in each ear?

Whatever you want, he can’t hear you..

What did the Gorilla say to his friend when he called him back on the phone?
You-Rang-a-Tang?

Why did the gorilla cross the road?
He had to take care of some monkey business.

I always get sad when I watch videos of gorillas using sign language to ask for food.
It’s a shame there are so many deaf gorillas.

What did the banana do when it saw a gorilla?
The banana split.

Why shouldn’t you get into a fight with a monkey?
They use gorilla warfare.

What’s the difference between a gorilla and your mother ?
A gorilla is ground-dwelling, predominantly herbivorous ape that inhabits the forests of central Africa, & your mother is a nice lady…. Also I did not have relations with a gorilla.

Why do gorillas have big noses?
Because they have big fingers.

Where does a 2,000-pound gorilla sit?
Anywhere it wants to.

If you were in the jungle, and a gorilla charged you, what should you do?
Pay him.

What’s the first thing a gorilla learns in school?
The ape b c’s.

What do you call a gorilla that weighs 150kg?
Sir!

How did the gorilla know she was poorly?
She had a belly ape.

Why did the Gorilla fail its exam?
He didn’t have the ape-titude.

What should you do if you find a gorilla sitting at your school desk?
Sit somewhere else!

What’s the best time of year to see gorillas in the wild?
Ape-ril.

A gorilla walks into a bar and orders a beer. The bartender says, “Why the big feet?”

The gorilla replies, “Big feet? That’s not my feet.”

Why should you never fight a Gorilla?
They know king kong fu.

What is a gorillas favourite ice cream flavor.
Chocolate chimp.

What did the gorilla wear when he was cooking in the kitchen?
An ape-ron​

What do you call a white skinned gorilla?
Honkey Kong.

What do you call a large gorilla who appears to be in a bad mood?
Sir.

Did you hear about the extremely serious gorilla?
He didn’t monkey around.

​Did you hear about the gorilla with a screw loose?
He needed to use a money wrench to tighten it.

Did you hear about the gorilla who loved listening to classical music?
He was a silverbach.

Did you hear about the gorilla that was from Vietnam?
He was a viet kong.

What is the hairiest side of a gorilla?
The outside!

What do you call a gorilla who has been locked up in prison?
A kong-vict

What food did the Gorilla order when he went to France?
Ape Suzettes.

What do you feed a 700 pound gorilla?
Just give him anything he wants and then run.

What did the gorilla businessman specialise in?
Monkey business.

What is the first thing that gorillas learn at kindergarten?
Apey Cee’s?

What do you get if you cross a talking parrot with a gorilla?
I am not sure but if he says something you better damn well listen.

Why did the advertising tycoons hire a bunch of apes?
They were running a gorilla marketing campaign.

Related: Only the Best Bear Jokes

Why was there a troop of gorillas protesting outside the biscuit factory?
They wanted to stop the production of animal crackers.

​What is most gorillas favourite book to study in English class at high school.
The Apes Of Wrath.

What is a gorillas second favourite fruit to eat behind bananas?
Ape-ricots

What is the best thing to do if you notice a gorilla is sitting at your desk?
Find another place to sit.

​Did you hear about the 2 apes that kept fighting with each other?
It was gorilla warfare.

Why wasn’t King Kong able to climb to the top of the Empire State Building?
He couldn’t quite fit in the elevator.

Where do apes like to cook their sausages?
On the gorilla.

What is just as big as a gorilla but literally weighs nothing?
A gorillas shadow.

Why did the gorilla have to visit the vet?
He wasn’t peeling well

The Best Dog Jokes Ever!

Gorilla Walking in the Jungle

A gorilla was walking through the jungle when he came across a deer eating grass in a clearing.
The gorilla roared, ‘Who is the king of the jungle?’and the deer replied, ‘Oh, you are,
Master.’

The gorilla walked off pleased. Soon he came across a zebra drinking at a
water hole.The gorilla roared, ‘Who is the king of the jungle?’ and the zebra replied, ‘Oh, you are,
Master.’

The gorilla walked off pleased. Then he came across an elephant. ‘Who is the king of the jungle?’ he roared. With that, the elephant threw the gorilla across a tree and jumped on him.

The gorilla scraped himself up off the ground and said, ‘Okay, okay, there’s no need to get mad just because you don’t know the answer.’

A gorilla asks a zookeeper, “Did you hear about the gorilla who escaped from the zoo?”

The zookeeper responds, “No, I did not.”

And the gorilla says, “That is because I am a quiet gorilla,”

A Gorilla Dies of Old Age

A gorilla dies of old age at a zoo right before the zoo opens. It is the only gorilla at the zoo since they are not very profitable.

However, the gorilla is their most popular attraction by far, and they cannot afford to go a day without it. So the zoo owner asks one of his workers to wear a gorilla suit they have in storage for an extra $100 a day if he will go in the gorilla cage and pretend to be the gorilla until the zoo can afford a new one.

Quickly, the new “gorilla” becomes the most popular craze at the zoo. People from all over are coming to see the “Human-like” gorilla.

About a month in, the craze has started to wear off. So, to get peoples’ attention back, he decides to climb over his enclosure and hang from the net ceiling above the lions den next to him.
A large crowd of people gather watching the spectacle in awe and terror. Suddenly the man loses his grip and falls to the floor of the lion’s den. The man starts screaming “HELP!! HELP!!!” Suddenly a lion pounces him from behind and whispers in his ear, “STFU right now or you’re going to get us both fired.”

A Gorilla Walks Into a Restaurant

The waitress comes over, gives him the bill and remarks “we don’t get a lot of gorillas coming in here”.

A guy wanted an assistant to help him hunt gorillas. As he is talking to a prospect assistant he explains to him the process:

We need a net, a gun and the dog for this.

We go to the jungle i spot a gorilla and i go up the tree to wrestle with him and through him off the tree. The dog is trained, as soon as the gorilla is on the ground, runs and grabs the gorilla by his nuts.
At this point i through the net over him and we capture him.

The assistant thinks for a minute and asks then what would we need a gun for. He responds isn’t it obvious? There is a chance for the gorilla to through me off the tree instead, you have to shoot the dog before it gets to me.

The Gorilla that Wasn’t Real?

A gorilla escaped from the local zoo and instead of buying another one they thought it would be a cheaper option to hire a man in a gorilla costume.

When zoo visitors came to see him he pounded his chest, grunted and walked like a gorilla.

Beneath the gorilla him was a lions cage.
One day the man in the gorilla suit was running around, grunting and pretending to be a gorilla when all of a sudden, the bottom of his cage broke and he fell into the lions cage!!

The man panicked and yelled out “help me, help me” for fear of his life!
The lion approached the man… The Lion says “Shut up! You are going to get us both fired!”

The Gorilla and the Bartender

A gorilla walks into a bar and orders a martini. The bartender says, “What’s with the monkey suit?” The gorilla replies, “I’m a gorilla. I have to wear this stupid suit.”

The bartender says, “No way! You can talk?” The gorilla nods his head yes. The bartender says, “So what do you do for a living?” The gorilla replies, “I work in an office downtown. I have to wear this stupid suit because I am the boss of all the other gorillas. It makes me so mad that I have to wear it every day! But don’t worry about me – I’ll get even with them one of these days!”