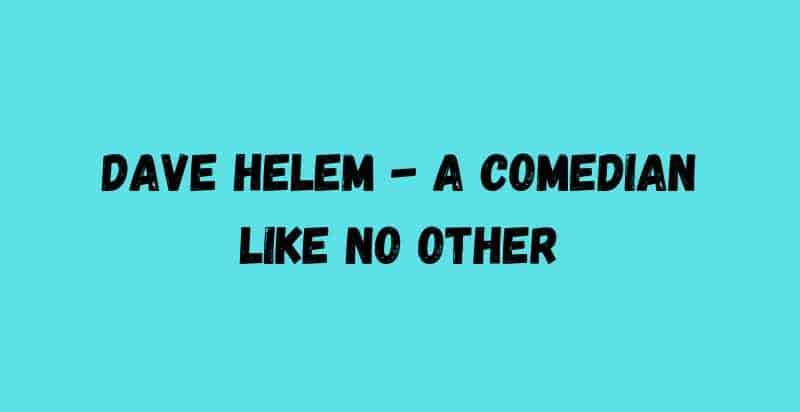 Dave Helem is an American writer, actor, and standup comedian hailing from Chicago, Illinois. He draws his inspiration for comedy and sense of humor from everyday life, which is why his fans find him relatable. With that said, let’s take a look at 10 interesting facts about the career and life of this brilliant standup comedian.

1. Dave Was Invited On Who’s Your God? A Comedy and Religion Podcast!

On April 30th, 2021, Dave was invited as a guest on the famous podcast series Who’s Your God? A Comedy and Religion Podcast!

Who’s Your God? is a unique podcast series for people based on the topic of religion. The podcast allows the guest and host to express their views and opinions regarding whatever religion and entity they believe in without facing judgement or criticism. Each week, Amy Miller – the host of the show and also a comedian – is joined by producer Steve Hernandez, co-host John Michael Bond, and a guest invite where they all discuss about beliefs, religion, god, and anything else is on their minds.

Who’s Your God? Is an ideal series for people who feel alienated and out-of-place by atheist and Christian podcasts. The hosts, producer, and the guest are open to whatever you may believe in all the while putting a comic spin on things in an inoffensive way.

In the one-and-a-half-hour episode with Dave Helem, the comedians went over various intriguing topics that included producing segregated comedy scenes and a drive-in-special. They also talked about Dave’s experiences and thoughts on becoming a Muslim and getting married as well as turning away from being a Muslim and splitting apart. The comedians also discussed how to keep you job and navigate when involved with terrible industry.

2. The Rising Comedy Star Has Written and Starred in His Own Film

Dave Helem wrote and starred in the film DJ the Chicago Kid, which is an hour-long roller coaster of experiences Dave Helem has had during his upbringing that have made him who he is, both the bad and the good.

The film was taped and released in 2021 during the pandemic. The recording of DJ the Chicago Kid took place at the famous Rose Bowl in Pasadena. With his laid-back style of comedy and storytelling combined with his rich imagination, the comedian and former math teacher takes us on a trip through the events that ensued in Dave’s life including his golden days in the classroom, how protesting doesn’t look the same for everyone, and why he won’t return to Canada.

Dave was also invited as a guest on the podcast called Wording is Hard on June 23rd, 2021. The host of the podcast – Tahir Moore – invites friends and fellow comedians over, the host and the guest indulge in a challenging game of word pronunciation. This fun and light-hearted theme and plot of the podcast has earned it immense popularity and love from the fans due to which the podcast series has managed to roll out 101 episodes.

Each contestant of the game has five cards with extremely difficult words scribed on them. The players need to pronounce the words, or at least try to do so, and the guess what they mean. Naturally, in the episode with Dave, Dave Helem and Tahir were the two contestants playing the game.

Work is like food or love in that you’re always working to get if don’t have it already. Roy’s Job Fair is a podcast series hosted by the comedian Roy Wood Jr. – a correspondent on Comedy Central’s The Daily Show with Trevor Noah – where each week, he invites people in the show from all walks of life in order to evaluate the human condition through the lens of profession and employment.

The discussion that takes place covers topics such as the most memorable jobs, job openings the show guests wish to secure, cringe-worthy office romances, and of course, workplace scams they’ve fallen victims to. The comedian Dave Helem goes over his story of being a Mathematics teacher and provides details on how kids stole his laptop, twice!

Another guest on the episode provides information on how one can become a self-taught coder if going to college isn’t in the books for you. Lastly, Roy – the host of the show – explains how his previous ice cream job involved recycling uniform pants.

5. The Comedian Starred in Sherman’s Showcase

Sherman’s Showcase is a 2019 TV series based on the musical and comedy genres. The show is essentially a comic chronicle on the history of bizarre, fictional, and famous variety show. The series ran for two season premiering in 2019 with the last episode coming out in 2021, a total of 15 episodes were produced.

The series was created by Diallo Riddle and Bashir Salahuddin, the latter also being one of the stars of the show. In 2019, Dave appeared in a total of two episodes of the show which were: The Ladies of Showcase (2019) and Behind the Charade (2019).

truTV’s Laff Mobb’s Laff Tracks is a hit comedy TV series hosted by the comedian and DJ, Cipha Sounds and produced by Def Comedy jam and co-creator Bob Sumner. The series brings a unique and unprecedented take on comedy through this series in which each half-hour episode comprises of hilarious personal stories of next generation comedians presented as a fun and light reinvention of standup.

The series first aired on January 3rs, 2018 and ran up till early 2020. A total of 52 episodes were released and Dave Helem was featured in two which included Losing My Religion (2018) and The Anti-Protest Protest (2018), in both of which he played himself – Dave Helem. During his time on the show, Dave worked with various other rising comedians such as Correy bell, Pretty Ricki, Dave Temple and Chaunte Wayans.

7. The Rising Comedy Legend Starred in South Side

South Side is a 2019 hit comedy show hosted by HBO max original. The series revolves around the story of two community college students who have graduated just recently and have set their sights on becoming entrepreneurs in Chicago’s South Side. The series is created by Diallo Riddle, Bashir Salahuddin, and Sultan Salahuddin with Sultan Salahuddin also being one of the stars on the show.

The series premiered on July 24th, 2019 with its second season coming out in 2021. To date, the series has put out 21 fine episodes and has a third season on the way. Dave Helem appeared on the show in 2019 on an episode called Litcoin in which played one of the inventors on the show.

8. Dave Helem Had Opened for and Went On Tour with Numerous Comedians

Having made up his mind to give comedy a shot and leave behind his teaching career, Dave started doing standup at various venues and clubs including the Comedy Bar, the Chicago Improv, and Rick Brunson’s House of Comedy in Canada.

Eventually, the comedian started opening for other renowned performers in the industry which included names like Tracy Morgan and Doug Stanhope. His vast potential for comedy and the dedication for it scored him a seat on tours with Tony Rock and Hannibal Buress where Dave visited and performed in various cities.

9. The Comic Legend Has Performed at Various Comedy Festivals

In 2015, Dave performed at the Big Sky Comedy Festival as well as the Oddball Comedy Festival. Dave also did a residence at the Woolly Mammoth Theater in Washington, D.C. for Second City’s Black Side of the Moon. The residence continued for a full two months during which Dave assisted in the writing and creating of the theater’s most successful selling performance ever.

10. Dave was also a writer for Comedy Central’s Hood Adjacent

Hood Adjacent with James Davis is a 2017 comedy TV series hosted by Comedy Central in with James Davis – the protagonist of the series – takes on a journey through the present situation and condition of the hood. The show primarily puts a spotlight on the traditions and cultures found in the suburban areas of America all the while making fun of present-day celebrities.

The series went on for 8 good episodes with the first one airing on June 28th, 2017, and ran for only one season. Dave Helem was a writer on the show and co-wrote 7 of the 8 episodes.

Prior to comedy, Dave Helem wanted to change the world through teaching, until God came down from heaven to tell him to give it up.

This rising comedy guru has yet to reach new heights of excellence in his career and it is an absolute pleasure for us to be able to witness this. There are still many more talented comics in the world you may not have heard about. To learn about some of these overlooked talents, go through our page and be amazed.

Paige Weldon: The Queen of Comedian