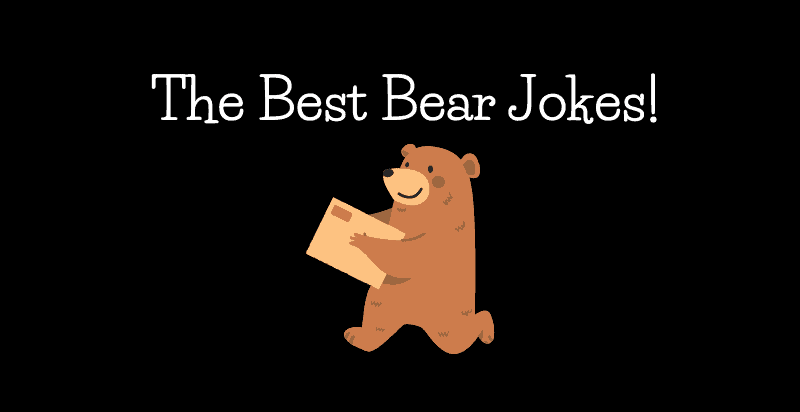 Who doesn’t love a cute teddy bear? But you have to be careful of the wild bears, they aren’t as friendly. Anyway, we digress, LOL. Today we present you with the best bear jokes – sure to get a laugh from kids of all ages.

The Best Bear Jokes Ever!

What do you get if you cross a skunk with a bear?
Winnie the Pooh!

What should you call a bald teddy?
Fred bear!

What animal do you look like when you get into the bath?
A little bear!

What time is it when 3 bears are chasing you?
3 after 1

Why did the bear cross the road?
It was the chicken’s day off!

What do you call bears without ears?
B’s.

Why is polar bear cheap to have as a pet?
It lives on ice!

Why shouldn’t you take a bear to the zoo?
Because they’d rather go to the cinema!

How do you hire a teddy bear?
Put him on stilts!

What do you call a big white bear with a hole in his middle?
A polo bear!

How do you start a teddy bear race?
Ready, teddy, go!

What is a bear’s favorite drink?
Koka-Koala!

What did the teddy bear say after dinner?
I’m stuffed.

What do you get when you cross a bear with a garden?
Squash!

What do you call a wet bear?
A drizzly bear.

Why do polar bears have fur coats?
Because they would look weird in ski jackets.

What does Pooh Bear call his significant other?
Hunny.

Why did the bear dissolve in water?
Because it was polar.

What do you call a bear with no teeth?
A gummy bear!

Why did Mother Nature make only one Yogi Bear?
Because when he tried to make a second one he made a Boo-Boo.

How do you start a teddy bear race?
Ready, teddy, GO!

Why do pandas like old movies?
Because they’re in black and white.

Why didn’t the baby leave his momma?
Because he couldn’t bear it!

What does pooh eat at parties?
Blue bear-y pie.

Why did Tigger look in the toilet?
He was looking for Pooh

Why did the bear get fired from his job?
He would only do the bear minimum.

What do you get if you cross a grizzly bear and a harp?
A bear faced lyre!

What do you call a freezing bear?
A brrrrrrr.

What is as big as a bear but weighs nothing?
Its shadow!

How do you apologize to a koala?
Bear your heart and soul.

What do you call a grizzly bear in a phone booth?
Stuck!

What do you get if you cross a skunk with a bear?
Winnie the PU!

Why is it cheap to feed polar bears?
Because they live on ice only.

Why don’t bears eat fast food?
Because it’s hard for them to catch.

Why did the bear quit his job at the daycare center?
It was panda-monium!

What do you get when you cross a teddy bear with a wild hog?
A teddy boar.

Why was the bear cub so spoiled?
Because his mother panda’d to his every whim!

What do you call a bear that jumps but never lands?
Peter Panda.

What do you call a polar bear in Florida?
A solar bear.

Do you know you only need two letters to spell panda?
You need a P and A.

How does the koala bear stay fit?
He does bear-obics.

What color socks do bears wear?
None. They usually have bear (bare) feet.

Why do bears have a hairy coat?
Fur protection.

Related: The Best Jokes about Bees

People often ask what I do at the teddy bear factory. My reply?
“Just stuff.”

How does a bear stop a movie?
It hits the paws button.

Two bears are walking through the woods when one stops abruptly.
“Hey, what’re you doing?” the first bear asks.
“I’m just paws-ing for a break!” replied the other.

Where does a polar bear go to vote?
The North Pole.

What do you call a teddy bear at the North Pole?
Lost!

How do koalas stay cool in the summer?
Bear conditioning.

How do bears travel when they go on vacation?
Bear-o-planes.

Why did the bear quit his second job?
He needed some koala-ty time with his family.

What do you call a bear with a bad attitude?
The bearer of bad news.

Where do teenage polar bears go to dance?
The snow-ball.

How can a bear catch fish without a pole?
They use their bear hands.

What is a polar bear’s favorite cereal?
Ice Crispies.

What is a polar bear’s favorite healthy snack?
Iceberg lettuce and snow peas.

What do you call a bear who practices dentistry?
A molar bear.

How did the grizzly bear walk in the snow?
Bear-footed.

Which animal can hibernate while standing on its head?
Yoga Bear.

What do you call a teddy bear who rides a bike everywhere?
Schwinnie the Pooh.

My wife said I need to grow up. I was speechless..
It’s hard to say anything when you have 45 gummy bears in your mouth

Bear Jokes with More of a Story

An old west dime novel writer is out looking for a good story when he wanders into a saloon. He sees a group of rough rider lookin’ scoundrels playing poker and he musters up enough courage to sit down with ’em (thinkin’ he might get a story out if he was lucky). “Mind if I play?”

The others look up with a scowl that would curdle milk, but one looks at the clock and shakes his head. He points out the time to the others and they gather up their chips and go. “Play alone, we’re a-leavin’. Wild Bill’s comin’ to town.”

The writer is confused, but smells a story brewing; a strong one at that. He hoofs it up to the bar, passing most other patrons on their way out, and slaps a whole dollar bill on the table, “Barkeep, give me a beer and a story, and you can keep the change.”

After taking a quick glance at the clock, the bartender shakes his head, pours the beer, and pushes the bill back to the man. “The drink is on the house, but I suggest you drink it quick and leave. Wild Bill is coming to town.” Without another word the ‘tender puts his last glass away and walks right out the swinging doors, leaving the writer in an empty bar.

Now fear in his gut tears at him as he hears the emptiness in that bar. This emptiness seems to seep in as he realizes that he’s about to be the last man in this town, alone with only the sound of that ticking clock to keep him company. Still, a story of this caliber must be worth something; so he waits…

Tick, tock, tick, tock, tick, Bong<CRACK!>- Just as the clock strikes the first chime of twelve, a sound like thunder splitting a mountain is heard outside. The author runs to the doors to see what it is. In the distance and closing fast is a tornado coming right for the bar. He hits the ground and watches as the tornado comes up to the bar and stops.

The wind settles and there is a giant of a man riding a grizzly bear. He steps off the bear, and instead of hitching it, he punches the great beast right in the face <WHAM!>, knocking it cold on the ground.

The writer is so scared he runs back into the bar and dives behind the counter, sure that this is the last of his days. <KaPLOW!> the giant kicks in the saloon doors, and they turn to splinters that imbed themselves into the walls and break bottles and glasses that they touch.

The man walks up to the bar, breaking every floor board with each thundering step. He looks down at the writer and slams his fist on the bar, cracking it down the middle, “GIMME A DRINK!”

He comes up, shakily holding out two bottles of whisky; which the giant snatches up, chews the glass tops off of, and drinks down as fast as the amber liquid can spill from the bottles. He throws both bottles in the air, whips out his six-shooter and fires off a round. The single bullet rips through both bottles showering the weakened author with shards that rain down.

Regretting his curiosity and repenting of his life, the writer stands on weakened legs and whimpers out, “W-w-w-would y-you like a-another drink?”

The man turns to him, fire in his eyes, then glances at the clock… “Nah, I gotta go. Wild Bill’s comin’ to town.”

He gets a 12 pack and walks up to the clerk and says “I’ll take these.”

The clerk is stunned, so he heads to the back to speak with the owner. “Hey boss” he says, “there’s a bear asking for a beer.”

The owner pauses for a second, then replies “Well then sell it to him, but charge him double. Bears don’t know the price of beer.” So the clerk heads back out front and sells the bear the beer.

“You know,” says the clerk, “we don’t get many bears around here.” To which the bear replies, “At these prices I’m not surprised.”