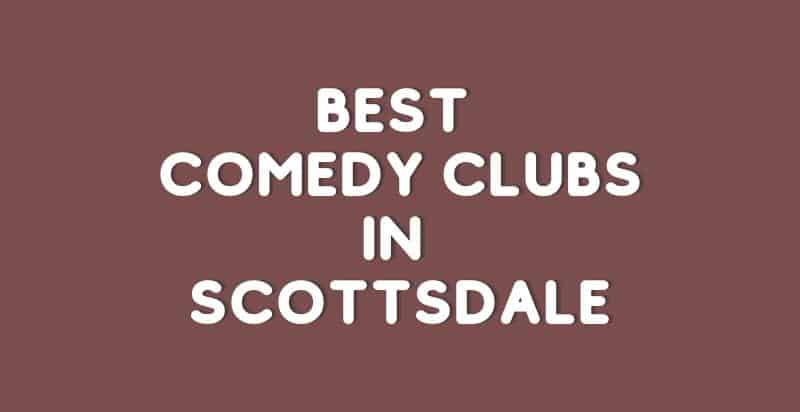 A typical weekend in Scottsdale, AZ can make anyone seek out a fun way to relax and enjoy a night out with friends or family. How about an experience that makes you laugh out loud and leaves you with no regrets about spending your money?

Comedy clubs in Arizona attract many people who want to see live comedy acts performed by top-notch standup comedians. People from different cities visit these clubs to laugh their heads off. If you want in on the action, this list of comedy clubs Scottsdale will give you a good idea of what to expect!

Here are the top comedy clubs in and around Scottsdale:

Tourists know Talking Stick as a resort and casino, but the locals recognize this place that brings in some of the best comedians.

The Showroom is a 650-seat theater within the bounds of Talking Stick that hosts exotic shows, such as standups and concerts. With a concert theater model and a venue that can house hundreds of people, Showroom is the place where you can catch your favorite comedians live.

Steven Wright, Jay Leno, Kathleen Madigan, Ron White, and more have graced the stage of Showroom at Talking Stick Resort with their presence. You will also love the comfortable seats and a full bar that enhance the comedy experience at this location.

Since Tempe Improv opened its doors in 1988, the place has been introducing big names in comedy. The club is loved by seasoned comedians and newcomers alike for its welcoming interior and an audience that appreciates improv. Previous performers of Tempe Improv include Gabriel Iglesias and David Spade.

Other up-and-coming comedians who present their talent on the Tempe Improv stage are Ali Siddiq, Conner King, Chad Daniels, Preacher Lawson, and more. You should arrive 45 minutes before the show to ensure you have your ticket in hand and two drinks in your system before you’re laughing your head off.

Rick Bronson’s innovative style of comedy has earned him 8 Comedian of the Year awards. He is the comedian who brought laughter to North Phoenix and started House of Comedy on the High Street. Today, Rick Bronson’s comedy club is one of the hottest comedy venues in the world!

Surrounded by some of the best dining places in Phoenix, AZ, Stand Up Live is the comedy club you should visit this weekend. The club has hosted some of the most prominent names in comedy, including Dave Attell, Jeff Ross, Bill Burr, Ian Fidance, Shane Gillis, and Rob Schneider.

Stand Up Live offers seats on a first-come, first-serve basis. If you are not there within 15 minutes of the show starting, you won’t get a chance to get your ticket.

So, make sure you arrive 30 to 60 minutes before the show. Don’t worry. There are enough snacks and drinks to keep you company as you wait for the show to start.

A post shared by Stand Up Live Phoenix (@standuplive)

If you want to see some local talents performing on stage in Arizona, JP’s Comedy Club in Gilbert should be your go-to spot. It is a considerably small venue with a mix of local comedians and world-class talents from comedy tours. The club also offers classes for amateurs who want to improve their improv skills. Ken Ferguson, a prestigious improv instructor, teaches at JPs once every week.

Some of the best talents who’ve performed on JPs stage are Adam Hunter, Mikey McKernan, Geof Piccarreta, Jon Carden, Paul Farahvar, Robert Kane, and Sam Ridley. The club offers snacks and alcoholic and non-alcoholic beverages for everyone. If you want to have dinner before or after the show, you can visit the nearest restaurants.

As one of the best comedy clubs in the state, Laff’s has hosted many top comedians over the past four decades. Legendary stars who have left their audience howling with laughter at Laff’s Comedy Café include Robin Williams, Jerry Seinfeld, Ellen DeGeneres, Rob Schneider, Victoria Jackson, Tim Allen, and Kevin Nealon.

The national headliners come back to perform at Laff’s Comedy Café every Friday and Saturday night. You can see one or more of them perform live if you visit this weekend! There will be food, drinks, and good company to make it a memorable night.

Another great comedy club to visit in Tucson is Unscrewed Theater. This comedy club is perfect for those who enjoy silly antics and uncontrollable laughter.

Every Friday and Saturday night, Unscrewed Theater organizes improv shows that are non-offensive for families. Some Saturdays, the club hosts uncensored shows for people who love raunchy humor. If you are the latter kind, make sure to check those shows out!

The Neighborhood Comedy Theater is a place for improv and sketch comedy artists who want to learn and showcase their talent.

With various classes and workshops, local comedians and other newcomers can improve their improv skills. There are weekly interactive shows where the cast gets to let go of their fears and enjoy while learning.

The club hosts more than 300 shows every year. Every Friday and Saturday night, shows are held at The Neighborhood Comedy Theater. Don’t forget to check out!

Watch the legendary standup comedians roasting their audience and creating iconic moments in the history of comedy clubs.

Now you know the best comedy clubs in Scottsdale and surrounding areas. All these clubs are accessible by car from the heart of Scottsdale. You can make it a weekend night out with friends, your partner, or family by visiting one of these places and grab a bite at a nearby restaurant afterward.

What Are Some Highly Rated Comedy Clubs in Scottsdale, AZ?

Some of the highly rated comedy clubs in and around Scottsdale are Showroom at Talking Stick Resort, Stand Up Live, Tempe Improv, and Rick Bronson’s House of Comedy.

What Should I Wear to a Comedy Club in Scottsdale?

There is no specific dress code for comedy clubs in Scottsdale. The only rule is to wear something comfortable that does not make others uncomfortable.

Be sure to read our guide to what to wear to a comedy club for more suggestions!

How Long Are Comedy Shows in Scottsdale?

An average duration for comedy shows anywhere is between 90-120 minutes. The time it takes usually depends on the number of acts you’ve selected for that event.