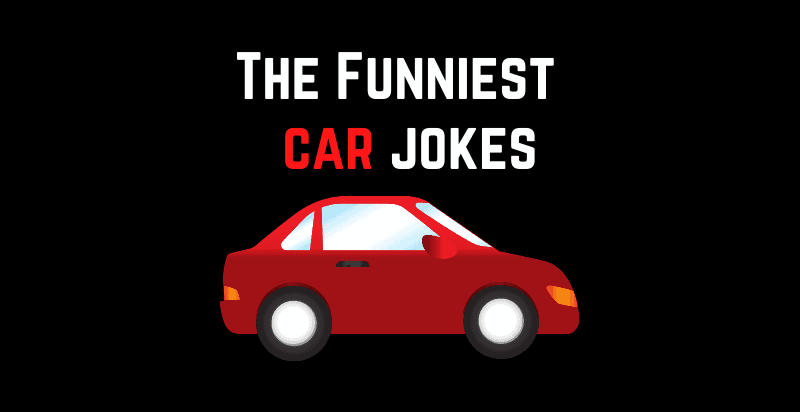 We all have cars and most of us drive them everyday.  They have been a long running source of jokes. These jokes about cars and automobiles are kid appropriate. We have an amazing collection of funny one liners, longer story jokes and even some fun acronyms. Enjoy!

The Funniest Jokes about Cars and Automobiles

Whaat do you get when dinosaurs crash their cars?
Tyrannosaurus wrecks

New Teslas don’t come with a new car smell they come with an Elon Musk.

Two Cadillac drivers got in a fender-bender, got out of their cars, and then started yelling at each other.

Within a few seconds, they were in a fistfight. I guess you could say things Escaladed quickly.

Here are some funny acronyms for cars and their owners. Some are quite funny!

Longer Jokes about Cars and Automobiles

A man saw an advertisement in a paper which read, “Porsche for sale: $200.” He went to view it, expecting to find a battered heap of rust, but instead found himself face to face with a gleaming new model in mint condition.

“Simple. Last week, my husband ran off with his secretary. He said: “You can keep the house, but sell my Porsche and send the money to me.”

A guy was driving a Yugo on the interstate when it broke down. A short while later, a Porsche stopped and the driver offered to give the Yugo a tow. “If I go too fast,” said the Porsche driver, “honk your horn.”

So the Porsche set off with the Yugo in tow. A few miles down the road, a Corvette pulled alongside the Porsche.

The Corvette driver called out, “I bet I can outrace you with that thing in tow behind you.”
The Porsche driver was up for the challenge and the two cars sped off side by side down the highway. Two State Troopers watched in disbelief as the cars flew by.

“Did you see that Porsche and Corvette racing neck and neck?” said one.

The other said, “Yeah. And what about that little Yugo flying behind them, honking his horn, trying to pass?”

A man was driving his wife home after a night out when they stopped by the police.

“Did you know you were speeding, sir?” asked the officer.

“No, I had no idea that I was speeding.” replied the driver.

“Of course you were,” interrupted the wife. “You’re always speeding.”

The officer looked at the rear of the vehicle. “And did you know your brake light is broken, sir?”

“No, I had no idea that it was broken.” replied the driver.

Again the wife interrupted. “Of course you knew it was broken. You’re always saying you’ll get it repaired, but you never have.”

The officer began to sympathize with the driver. “Does she always talk to you like this?”

“Only when he’s drunk.” said the wife.

“The car won’t start,” said a wife to her husband. “I think there’s water in the carburetor.”

“How do you know?” said the husband scornfully. “You don’t even know what the carburetor is.”

“I’m telling you,” repeated the wife, “I’m sure there’s water in the carburetor.”

“In the swimming pool.”