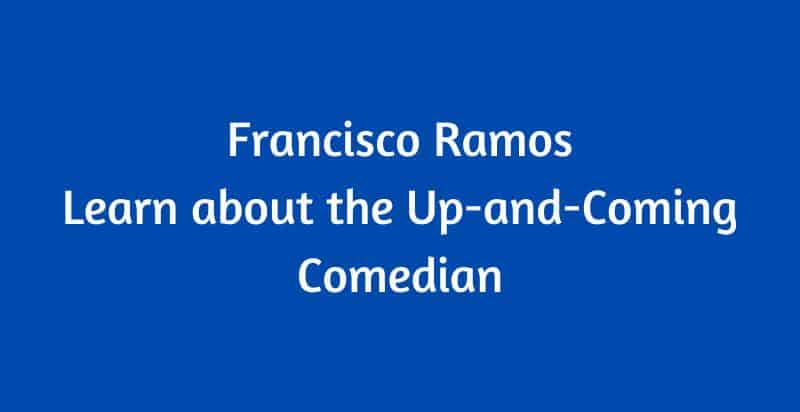 Francisco Ramos moved to the United States as a teenager. He came from Venezuela prepared to chase the American dream but didn’t end up in a big fancy office. He studied hard and did his undergrad in Finance and International Business, but a job in this field didn’t satisfy him.

Luckily, he got the chance of a lifetime to perform on stage and make people laugh. Turns out that’s precisely what Francisco wanted!

He is a standup comedian, writer, and actor, with some powerful platforms associated with his work, such as Netflix and HBO.

Francisco Ramos is a proud Latino who spreads cultural diversity awareness through his sketches. He might support the cause but never overwhelms his audience with the facts. Francisco’s fans love him for his subtle and hilarious style of standup comedy.

Some Facts about Francisco Ramos

1. He Is an Ethnic Comic

The entertainment industry houses many ethnic comics with interesting and thought-provoking stories. They use their diverse upbringing to create funny content for their audience. Francisco Ramos is like any other ethnic comic in the circle. The only difference is he wasn’t born in America.

2. He Immigrated to America as a Teenager

He lived in Venezuela until his teenage years. After immigrating to America, he realized the difference between living as a Latino in the two culturally different countries.

The discriminatory treatment he experienced in the United States as a Latino was eye-opening for him. While it challenged his life, the discernment gave him insight into the issues regarding diversity, lack of awareness, and the role of politics in the matter.

3. He Talks about His Life as an Immigrant

Francisco has a unique perspective on life as an immigrant. It also fuels his comedic content and gives him a chance to connect with people who’ve had similar experiences in the United States.

He is a talented comedian who does not waver from his style and topic. His content changes with platforms and audiences, but it remains rooted in living a life as an immigrant in America.

4. He Suffered a Quarter-Life Crisis

Francisco did not immigrate to America to pursue a comedy career. As a matter of fact, he majored in a field that wouldn’t be considered “fun” by many people. He graduated with a degree in Finance and International Business and got himself a job at an investment firm.

Life was good for him but then hit the quarter-life crisis. Instead of considering it a temporary lack of interest in his field, Francisco took it as an inspiration and immediately moved to Los Angeles to do standup.

5. His Talent Was Recognized Early in His Career

Francisco was a finalist on “Last Comic Standing” and among the top 12 contestants on “CBS Multicultural Diversity Showcase.” He was shortlisted from 5,000 contestants for the latter.

Francisco also won the Lucille Ball Comedy Festival, after which American Latino created a documentary about his fantastic journey as a standup comic. His success on these platforms paved the way for his career on the road and a standup special with HBO MAX called “Entre Nos.”

6. He Thinks Talking about Politics Is Not Obligatory

While Francisco Ramos is perfectly comfortable talking about discrimination, racism, and politics in his sketches, he thinks that comedians with minority backgrounds do not have to follow the same practice. In fact, his opinion is not only for ethnic comics. He wanted all American comedians to know that addressing current US politics is not mandatory.

Being a Latino was never a cause of discrimination for him in Venezuela, but it is in the US. He talks about these issues because of the discrimination he faced firsthand.

Francisco Ramos is an honest and straightforward comedian, which is a quality his fans admire in him. His content contains hints of politics that are never influenced by the political climate.

When Donald Trump became the president, Francisco commented in one of his interviews that he thought Trump would be able to change the ways of America (talking about typecasting).

Francisco said that nothing has changed after becoming president, and the general stereotypes people have for Latinos remain a problem for the country. Regardless, he continues to use his comedy to highlight these stereotypes.

8. He Is Not an Activist

Francisco Ramos respects everyone’s beliefs and does not want to impose his thoughts on his fans and followers. He talks about discrimination against Latinos and his life as an immigrant because he can make those topics digestible with his writing and performances.

If a topic is not funny, he does not touch on that. While he openly makes fun of the state of minorities in the United States, he is not aggressive about it.

9. Zoo Animals Is His Brain Child

“Zoo Animals” is a short film licensed by HBO. It was co-written and directed by Francisco Ramos after his participation in the premium comedy content studio “Mas Mejor.”

The studio was powered by Latino voices, and it gave Francisco the courage to pursue a career in writing and direction. “Zoo Animals” is available on HBO Max, and it has been accepted for various festivals, including JFL (Just for Laughs).

“Zoo Animals” is appreciated by many fans and critics, but this wasn’t the first time Francisco wrote for a show. His first-ever “appearance” as a writer was in 2015 for “Last Comic Standing.”

He wrote for five episodes of the TV series. Later he worked on other programs, such as “Don Paco’s Casa,” “Brake Time,” and “Straight Up, Stand Up.” He also writes his own content for his tours.

11.  He Played a Recurring Character on Gentefied

Netflix’s Gentefied was a comedy-drama focusing on the lives of three Mexican-Americans pursuing the American dream. The show ran for two successful seasons, and one of the recurring roles was played by Francisco Ramos. He appeared in the first three episodes of the show, playing the role of ‘Felix.’

12.  He Voiced Lead Marmoset in Rio

Francisco has more than a successful standup career. He is also the voice of various memorable characters, including Lead Marmoset from the animated movie Rio.

He has also voiced characters in Angie Tribeca, Shameless, and Netflix’s Lady Dynamite. The unique tone and texture of his voice have been praised since his first voice acting job. That’s why Cartoon Network brought him on to voice for Victor & Valentino.

Watch Francisco Ramos perform at the #StraightUpStandUp Series in 2019.

Francisco Ramos is a comedian and voice actor who loves creating diverse content. He is an immigrant who has faced stereotypes since he moved to America, but he only uses those experiences to create funny and relatable sketches for his audience.

If you haven’t had a chance to watch him perform, you should check out some of his YouTube videos!

Lorraine Lopez – The Aspiring Comedian with an Energetic Personality

Fahim Anwar – A Comedian with a Degree in Aerospace Engineering