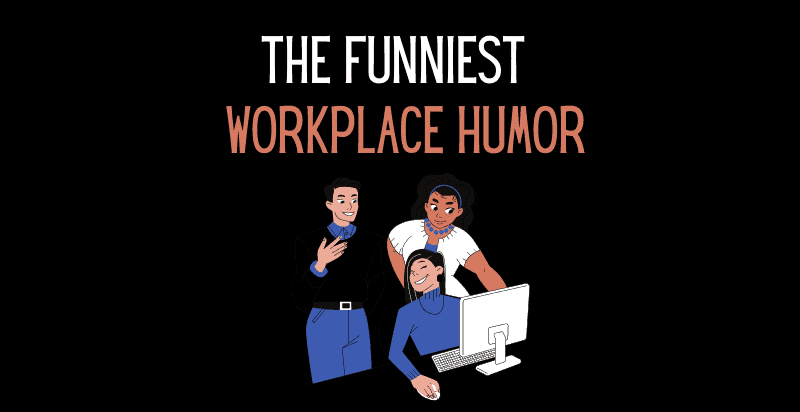 Humor is a funny thing. Sometimes, it’s what keeps you going in the hardest of times. It’s known to be a secret weapon for easing tensions and connecting with others. The workplace is no exception to this rule. In fact, since there are more variables or challenges in the office environment, humor may be even more valuable in the workplace than it would be at home.

The workplace can often lack humor because there are many different cultures represented by the employees and they each have their own sense of humor that may not translate well across cultures or languages. Today, we present you with some of the funniest office places humor out there. Enjoy!

The Making of a Boss

When the Lord made man, all the parts of the body argued over who would be boss.

The stomach countered with the explanation that since he digested all the food, he should be boss. The eyes said that without them man would be helpless, so they should be boss. Then the asshole applied for the job. The other parts of the body laughed so hard at this that the asshole became mad and closed up.

After a few days…

The brain went foggy, the legs got wobbly, the stomach got ill, and the eyes got crossed and unable to see. They all conceded and made the asshole boss.

Signs Your Company is Planning a Layoff

Interview with a Signalman

Andy wants a job as a signalman on the railways. He is told to meet the inspector at the signal box.
The inspector puts this question to him: “What would you do if you realized that 2 trains were heading for each other on the same track?” Andy says, “I would switch the points for one of the trains.”

“What if the lever broke?” asked the inspector. “Then I’d dash down out of the signal box,” said Andy, “and I’d use the manual lever over there.”

“What if that had been struck by lightning?” “Then,” Andy continues, “I’d run back into the signal box and phone the next signal box.”

“What if the phone was engaged?” “Well in that case,” persevered Andy, “I’d rush down out of the box and use the public emergency phone at the level crossing up there.”

“What if that was vandalized?” “Oh well then I’d run into the village and get my uncle Silas.”

This puzzles the inspector, so he asks, “Why would you do that?” Came the answer, “Because he’s never seen a train crash.”

Quotes and Comments from and about Bosses