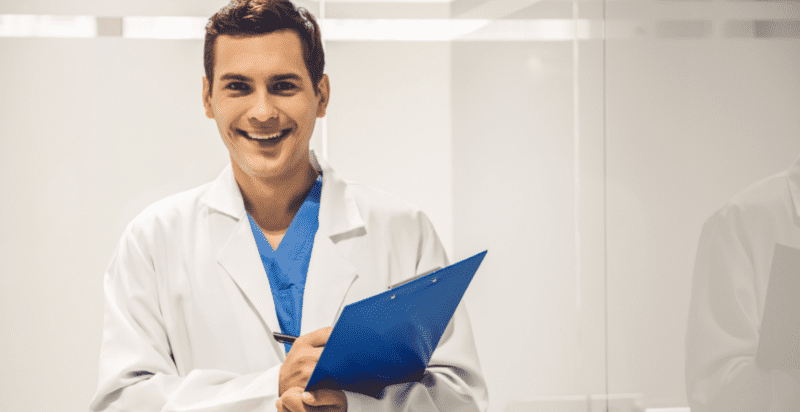 Going to see the Doctor is a stressful thing for many of us. Especially if you are in a hospital or even worse if it is a crisis and you are in the Emergency Room or even having surgery.

It’s good to have a sense of humor to keep things light. It will help you feel better and keep your mind focused on healing.

Dealing with a Doctor is often not fun, but we guarantee that these jokes will give you a good laugh!

The Funniest Jokes about Doctors and Medicine

One Liner Jokes about Doctors and Medicine

Bob to X-ray technician after swallowing some money:
“Do you see any change in me?”

Nurse: Doctor, the man you’ve just treated collapsed on the front step what should I do?
Doctor: Turn him around so it looks like he was just arriving!

Did you hear about the Siamese twins?
Everything goes in one ear and out the brother.

Did you hear about the man who fell into an upholstery machine?
He’s fully recovered.

“Doctor, there’s a patient on line 1 that says he’s invisible.”

A doctor tells a woman she can no longer touch anything alcoholic. So she gets a divorce.

“My doctor told me that jogging could add years to my life. He was right—I feel ten years older already.” — Milton Berle

Why did the banana go to the doctors? Because he wasn’t peeling well!

Why did the cookie go to the doctor? Because they felt crummy.

What did the doctor say to the sick apple? We’ll get to the core of this.

What do you give a sick lemon? Lemonaid.

What did the doctor say to the rocket ship?
“Time to get your booster shot!”

Did you hear about the guy who lost his whole left side?
He’s all right now!

Why did the grasshopper go to the doctor?
He kept feeling jumpy.

Why did the rope go to the doctor?
It had a knot in its stomach.

Doctor, I’m hearing a ringing sound?
Then answer the phone.

Why did the bucket go to the doctor?
He had a pail face.

Why did the robot go to the doctor?
She had a virus!

How did the doctor cure the invisible man?
He took him to the ICU.

Why did the calendar have to visit the doctor?
It had a terrible year-ache.

What’s the best place to hide from a doctor?
The apple orchard.

Why did the cookie go to the hospital?
He was feeling really crumby.

What do you call a fish with a medical degree? A sturgeon.

How do you cure a sick bird? With tweetment.

Did you hear about the latest birth control pill for men?
You take it the day after. It changes your blood type.

Patient: Doctor, Doctor, I broke my arm in two places!
Doctor: Stay out of them places!

After receiving his medication from the pharmacist, the customer asks, “are these time release pills?” The pharmacist replies, “Yes. They begin to work after your check clears.”

Did you hear about the baby born in the high tech delivery room?
It was cordless!

At the beginning of my shift I placed a stethoscope on an elderly and slightly deaf female patient’s anterior chest wall. “Big breaths,” I instructed. “Yes, they used to be!”

There once was the doctor who was so conceited about his looks and charm that whenever he took a woman’s pulse, he subtracted 10 beats to account for her being excited to be near him.

Late one night the doctor’s wife was home alone, after her husband had been called to the hospital for an emergency. The doorbell rings, and she answers.

“Is the doctor at home?” asks the man at the door, in a very hoarse and quiet voice due to his aching throat.

“No, c’mon in!” whispers the doctor’s wife in return.

Related: The funniest jokes about nurses and nursing

A Young Woman Complaining of Pain

A young woman went to her doctor complaining of pain.”Where are you hurting?” asked the doctor.

“You have to help me, I hurt all over”, said the woman.
“What do you mean, all over?” asked the doctor, “be a little more specific.

The doctor checked her thoughtfully for a moment and told her his diagnosis; “You have a broken finger.”

Take Something for the Cold!

“My doctor told me to take something for my cold.”
“What did you take?”
“His Coat!”

Wife: Doctor My husband thinks he’s a satellite dish.
Doctor: Don’t worry I can cure him.
Wife: I don’t want him cured I want you to adjust him to get the movie channel.

A mother complained to her doctor about her daughters strange eating habits. “All day long she lies in bed and eats yeast and car wax. What will happen to her?
“Eventually” said the Doctor, “she will rise and shine!”

A guy walks into work, and both of his ears are all bandaged up.
The boss says, “What happened to your ears?”
He says, “Yesterday I was ironing a shirt when the phone rang and shah! I accidentally answered the iron.”
The boss says, “Well, that explains one ear, but what happened to your other ear?”
He says, “Well, jeez, I had to call the doctor!”
If it is dry – add moist: if it is moisten – add dryness.
Congratulations, now you are a dermatologist.

Patient to the eye doctor: “Whenever I drink coffee, I have this sharp, excruciating pain.”
“Try to remember to remove the spoon from the cup before drinking.”
Patient: I always see spots before my eyes.
Doctor: Didn’t the new glasses help?
Patient: Sure, now I see the spots much clearer.

A guy walked into the doctor’s surgery for an appointment.

“Would you like to tell me your problem?” the pretty receptionist asked.

“I’ll need the information for the doctor.”

“It’s rather embarrassing,” the guy stammered. “You see, I have a very large and almost constant erection.”

“Well, the doctor is very busy today,” the receptionist cooed, “but maybe I can squeeze you in.”

The Surgeon and The Missing Glove

The surgeon told his patient that woke up after having been operated: “I’m afraid we’re going to have to operate you again. Because, you see, I forgot my rubber gloves inside you.”

“Well, if it’s just because of them, I’d rather pay for them if you just leave me alone.”

Doctor: I have some bad news and some very bad news.
Patient: Well, might as well give me the bad news first.
Doctor: The lab called with your test results. They said you have 24 hours to live.
Patient: 24 HOURS! That’s terrible! WHAT could be WORSE? What’s the very bad news?
Doctor: I’ve been trying to reach you since yesterday.

Doctor: “I’ve got very bad news – you’ve got cancer and Alzheimer’s”
Patient: “Well, at least I don’t have cancer”

If Medical plan FAQ’s were honest, here is what they would REALLY SAY!

Since I just joined a HMO,  how difficult will it be to choose the doctor I want?

Just slightly more difficult than choosing your parents. Your insurer will provide you with a book listing all the doctors who were participating in the plan at the time the information was gathered.

I have an 80/20 plan with a $200 deductible and a $2,000 yearly cap. My insurer reimbursed the doctor for my out-patient surgery but I’d already paid my bill. What should I do?

You have two choices. Your doctor can sign the reimbursement check over to you, or you can ask him to invest the money for you in one of those great offers that only doctors and dentists hear about, like windmill farms or frog hatcheries.

What does HMO stand for?

This is actually a variation of the phrase, “Hey, Moe” Its roots go back to a concept pioneered by Doctor Moe Howard, who discovered that a patient could be made to forget about the pain in his foot if he was poked hard enough in the eyes.

Modern practice replaces the physical finger poke with hi-tech equivalents such as voice mail and referral slips, but the result remains the same.

Do all diagnostic procedures require pre-certification?
No. Only those you need.

Well, can I get coverage for my pre-existing conditions?
Of course, as long as they don’t require any treatment.

What should I do if I get sick while traveling?
Try sitting in a different part of the bus.

No, I mean what if I’m away from home and I get sick?
You really shouldn’t do that. You’ll have a hard time seeing your primary care physician. It’s best to wait until you return, and then get sick.

I think I need to see a specialist, but my doctor insists he can handle my problem. Can a general practitioner really perform a heart transplant right in his office?

Hard to say, but considering that all you’re out is the $10 co-payment, there’s no harm giving him a shot at it.

What accounts for the largest portion of health care costs?
Doctors trying to recoup their investment losses.

Will health care be any different in the next century?
No, but if you call right now, you might get an appointment by then.