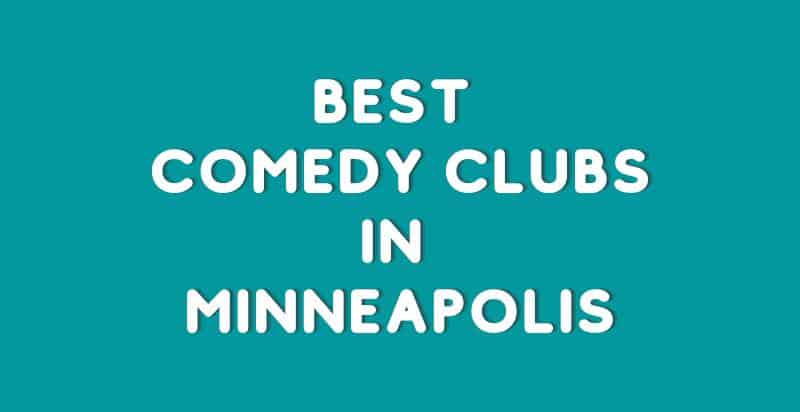 Minneapolis constantly gives people a reason to visit the best comedy clubs in the city and see national and local standup stars perform live. There’s no shortage of weekly improv nights, organized theater stage performances, and open mic comedy shows in Minneapolis. When you want to see national headliners in your city and encourage local comedians to perform alongside big names, here are the hidden gems in Minneapolis you should visit!

Founded in 1991, Acme Comedy Company has been a crème de la crème for the Twin Cities comedy crowd. With great food and drinks served at the Sticks Restaurant of the club, there’s nothing to stop you from enjoying a long, fun night at Acme and sharing the memories with your friends. Acme Comedy Company also hosts a ‘dinner and a show’ special.

Located in the basement of The Corner Bar, The Comedy Corner Underground hosts hilarious shows every Friday and Saturday night. The bar is filled with outstanding comedic talent who perform for 18+ audiences from 8 pm or earlier and 21+ audiences from 10 pm or later.

What to Wear to a Comedy Club? The Dos and Don'ts of Comedy Club Outfits

Comedy Corner Underground’s most unique feature is its wallpaper of fliers that mark previous performances and recall those that made the walls tremble with laughter. Some past comedians who’ve been on stage here are Mary Jo Pehl, Brittany Carney, Josh Dullea, and Kevin McCaffrey. The club is close to the University of Minnesota, so most of the audience is college students. Some even try their luck at standup during the open mic night.

As a sketch and improv theater in Minneapolis, Brave New Workshop has been producing, writing, and performing sketch comedy since the late 1950s. With a rich history of standup performances, the place calls itself the oldest workshop theater for satirical comedy. The theater is legendary, with almost 400 original shows organized for more than 3 million people.

A post shared by The Brave New Workshop (@bnwimprov)

4. The Comedy Room at Sisyphus

The Comedy Room at Sisyphus is connected with a brewery, so that you can expect great laughs and beer. Sisyphus Brewing is a place for private events and shows. They organize Amateur Hour on Thursday nights for those who want to try standup comedy without embarrassing themselves in front of pros.

Other days are just as fun as amateur night. They organize regular performances by recognized comedians such as Dave Waite and Mike Brody. You can check their website for upcoming events and get your tickets before they sell out.

Located on the top floor of the Mall of America, the place offers lots of laughs, food, and beverages. With two items minimum for all shows, you’ll get dinner and drinks with live standup comedy. House of Comedy organizes shows from Tuesday to Sunday, and you can check their website to look for upcoming events.

It’s not a comedy club but more of a game/coffee shop. Universe Games does not look like a place that would offer belly aches from laughter, but surprisingly, it does, and people often leave the shows here laughing their heads off.

As an unlikely spot for laughs, the place hosts a show called ‘Boy Kisses’ with MSP talent and features unexpected standup, characters, and sketch performances. If you are in town on the weekend, make sure to catch the show. It happens every Sunday at 7:30 pm.

Gutty’s Comedy Club is located on the second level of Southdale Center in Edina and bills itself as a clean comedy club with no filthy or repulsive jokes. With a family-friendly environment and a dry bar to accommodate audiences of all ages, Gutty’s is a new addition to the comedy clubs in Minnesota.

The dry bar may not have alcohol, but you can easily grab pretzels, nachos, pizza, and other yummy snacks before the show starts. Famous comedian Mike Brody headlined the grand opening, followed by Lee Hardin, Hoss Ridgeway, and Andy Beningo.

CSz Twin Cities is the comedy club you can hire for live and virtual performances. With clean and filth-free comedy, ComedySportz prides itself on entertaining people from all sectors, including business, education, etc.

The club also organizes corporate classes to develop communication and learning skills and improve team coordination and risk building. CSz Twin Cities does not have a permanent address listed, but you can get in touch with them via phone or mail to hire them for your next event.

The next generation of comedy superstars take the stage at The State Theater to cap off The Minneapolis Comedy Festival. DC Young Fly, Karlous Miller, and Chico Bean take a trip down memory lane, twerk with the fans, and roast everybody.

From amateur and corporate standup classes to improv comedy, sketch, and headliner shows, Minneapolis offers a diverse comedy scene. You can visit high-end comedy clubs for a date night or a fun night out with friends, or go to an improv theater or amateur night to showcase your skills–the choice is yours!

What Comedy Clubs Are in Minneapolis?

Acme Comedy Company, Comedy Corner Underground, Brave New Workshop, and Comedy Room at Sisyphus are some of the best comedy clubs in Minneapolis.

What Are Some Highly Rated Comedy Clubs in Twin Cities, MN?

What Is the Most Popular Comedy Club in Minneapolis?

Acme Comedy Club is the most popular in Minneapolis, MN. It has been around since 1991 and has showcased many headliners and famous performers, including Patton Oswalt, Lewis Black, and Dana Gould.