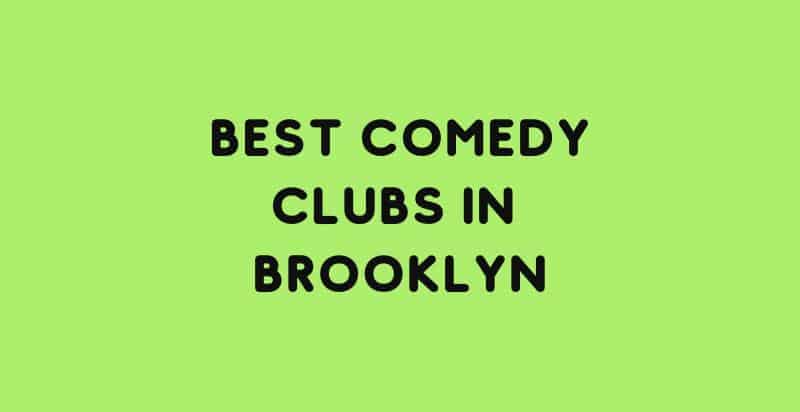 Brooklyn has a thriving comedy scene that is unexplored by many. These comedy clubs host a variety of different performances and shows every night and entertain audiences from different backgrounds. Many people, including tourists and locals, believe that they have to visit the Village or Manhattan to catch an entertaining comedy show. However, they don’t know that some of the best local comics in the city perform in Brooklyn comedy clubs. Although these comedy clubs might be smaller, the intimate space allows you to enjoy the show even more since there is only a small crowd.

If you and your friends are looking for a great night out, you should check out the following comedy clubs to watch hilarious stand-up and improv performances in New York City.

Here Are Some of the Most Entertaining Comedy Clubs in Brooklyn

The best part about watching performances at Eastville Comedy Club is that you can watch veteran comics as well as new comedians to the Brooklyn comedy scene. However, all comedians who do a set at this comedy club are dedicated to giving their best performance. Some of the most popular comedians that have turned up at Eastville Comedy club are Garofalo and Damien Lemon. It is a good place to visit with friends or close colleagues as the drinks are moderately priced and taste delicious as you laugh and enjoy the jokes from the performances.

The Tiny Cupboard in Brooklyn is the best place to go if you want to watch talented up-and-coming comedians perform their best sets. It is an underground and terrace comedy club in Bushwick that is popular for its hipster style and incredible comedy scene. Matt Rosenblum and Amy Wong founded the Tiny Cupboard as an experimental art studio, music production studio, and comedy venue in 2019. The little venue garnered much attention quickly as its unique concept inspired artists to visit the spot more. The comedy shows at The Tiny Cupboard are unique and are made much special by the club’s ambience. If you want to visit a comedy club that Brooklyn locals visit frequently, you have to go to The Tiny Cupboard with your friends for a fun evening.

Bill was a comedian himself (now he is a TV writer and producer) and wanted to create a space where people could enjoy comedy in a cozy setting. Therefore, you will notice that the Comedy Cellar is a limited and intimate comedy club where reservations of more than eight people are not allowed. Moreover, Comedy Cellar has hosted many NYC comedy legends over the years; therefore, it is an important part of New York’s history. You can catch shows by new comics and experienced comedians in this brick-walled club several nights of the week.

The Stand is a basement comedy venue that has become increasingly popular over the years. It has a restaurant upstairs, allowing diners to visit the venue after their meal and laugh out loud with other comedy lovers. Multiple publications have also recognized the Stand as the best comedy venue as it offers its stage to the most talented and funniest performers. The club is owned and headed by four brothers, and aside from great comedy, the club offers fantastic cocktails and comfort American food at great prices.

The best thing about The Stand is that you can visit the venue any time of the week since they offer amazing comedy shows daily. Some days, The Stand offers multiple performances in a day which means you can make plans however your schedule suits you. Dane Cook, Colin Quinn, Judah Friedlander, Nick DiPaolo, Bill Burr, Artie Lange, and Gilbert Gottfried are some of the popular comedians who have performed at The Stand.

Another fun comedy club to visit on a night out is Brooklyn’s famous Gotham Comedy Club. The comedy club was founded by two New York locals, Michael Reisman and Chris Mazzilli. They started the club in 1996 because they wanted to build a comedy venue that was a bit different from traditional comedy clubs. Their unique idea and vision brought them great success as the club is now considered to be one of NYC’s most elite comedy clubs.

What are some of the most highly-rated comedy clubs in Brooklyn?

Which comedy clubs in Brooklyn have many reviews?

Comedy Cellar, Lips – New York, and Drunk Shakespeare are some comedy clubs with many reviews by visitors and fans.

Which popular comedians are from Brooklyn?

Mel Brooks, Larry David, Adam Sandler, Jerry Seinfeld, Chris Rock, and Joan Rivers are just some of the most famous comedians who are from Brooklyn.

With a great comedy scene in Brooklyn, locals don’t have to travel to different boroughs to catch a great show. Small and intimate comedy clubs in NYC have contributed greatly to the city’s popularity nationally and internationally. You can easily visit any laidback Brooklyn comedy club on the weekend to watch famous comedians or a line-up of new comics. This way, you can support local comedians and have a great time with your friends.

Most Amazing Comedy Clubs in Boston

Most Hilarious Comedy Clubs in Cincinnati