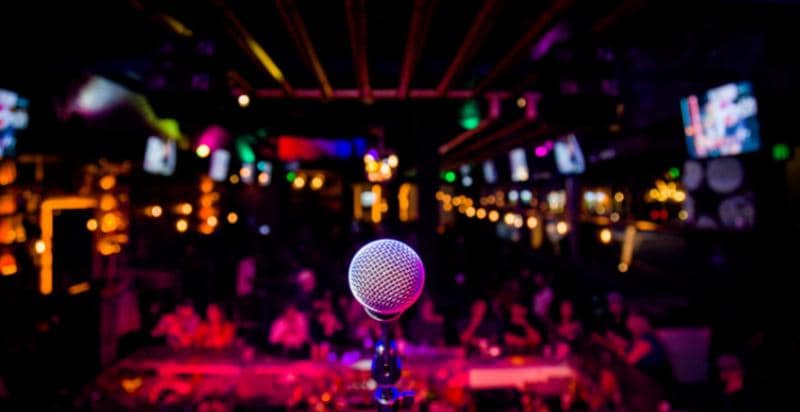 An impressive number of comedy shows happen every night in Los Angeles. LA has enough material to crack you up with improv, sketch, and musical comedy clubs all over the city. However, choosing which place to visit for a fun night out is not easy. With so many options that can leave you falling off your seat laughing, how do you pick the right one?

We made things easier for you by picking out the best Los Angeles comedy clubs. From standup shows to open mic nights, you can take your pick from these LA comedy clubs!

The Laugh Factory was founded in 1979 by an Iranian immigrant named Jamie Masada. He did not know comedy or English when he first arrived in the United States at 14. Eventually, he became a famous businessman and comedian.

He founded The Laugh Factory to pay standup comedians a fair wage. Richard Pryor was his first major act, earning $100 on his first night. He handed it back to Masada, saying he needed it to pay the rent.

Located on 8001 Sunset Blvd., Hollywood, CA 90046, The Laugh Factory is a prominent attraction for people looking for a good laugh. It has expanded beyond city borders and reached Chicago, Las Vegas, and Long Beach,

Opened in 1972, The Comedy Store is another popular Sunset Strip comedy club. It was founded by Comedian Sammy Shore and later handed over to his ex-wife, Mitzi. You may know them as the parents of Pauly Shore, a standup artist, and filmmaker.

The Comedy Store is located at 8433 W Sunset Blvd., West Hollywood, CA 90069. With a black building covered in names of comedians who’ve performed at the club, it is a landmark on Sunset Strip. Mitzi’s non-traditional tactics introduced a new wave of comedians to The Comedy Store. Breaking the stereotype, she reserved the upstairs section of the club for female comedians and later organized specialty nights for Latino and LGBTQ performers.

The original location has different rooms for comedians with varying degrees of popularity. The Main and Belly rooms are reserved for aspiring talents, and the Original Room welcomes recognized comedians frequently. Some of the most famous comedians of The Store are Chelsea Peretti, Dave Chappelle, Andrew Dice Clay, Andy Kaufman, Judy Tenuta, and Gallagher.

The Hollywood Improv is a bigger franchise than The Comedy Store and The Laugh Factory. It was founded in 1963 in a New York neighborhood and eventually expanded into a franchise in the 1970s. The location on Melrose Avenue is one of the best Los Angeles comedy clubs!

The New York location was not originally a comedy club—just a place for Broadway performers to unwind after their shows. People eventually used the location to try out new comedy material and meet strangers with similar talents.

The Los Angeles Improv location became the center of the Los Angeles comedy scene in 1982. A&E Network’s An Evening at the Improv used this location as their original site from 1982 to 1996. Today, Los Angeles Improv is more famous than any other LA comedy club and hosts big names regularly, such as Gabriel Iglesias, Adam Carolla, Dana Carvey, and Louis C.K.

You can visit LA Improv anytime and see your favorite stars hanging around the club. The main room acts will never disappoint you, but make sure to go early—the seats fill up pretty quickly, given the popularity of this location.

The Groundlings is another Melrose Avenue comedy club in Los Angeles, and we can say it’s a breeding ground for SNL stars. Maya Rudolph, Will Ferrell, Job Lovitz, Phil Hartman, Cheri Oteri, Chris Kattan, and Kristen Wiig are some names who recognize themselves as Groundlings alumni.

Started in 1974, The Groundlings is an improv and sketch comedy troupe. Gary Austin formed this troupe to incorporate an improv format based on the improvisational theater methods of Viola Spolin. These techniques were used by the Second City comedy enterprise and Del Close.

Located at 7307 Melrose Ave, Los Angeles, CA 90046, the place creates an interactive environment for the audience. Aspiring comedians learn a lot from their Groundlings sessions. They take pride in having Groundlings experience on their resume!

The Comedy Union came a little late to the party, but we are glad it did! As the first black-owned and operated comedy club in LA, The Comedy Union has a homey vibe and features a range of comedic talent.

In 2001, Enss Mitchell founded The Comedy Union in LA to provide a place for urban talent to shine. The goal was to give urban comedians a chance to show their talent more than once a week. To build a place where aspiring and professional comedians can hang out. Mitchell’s dream was realized when The Comedy Union became a hot place for laughter.

You can visit this comedy club any night and get a chance to see live performances by Harland Williams, Kevin Hart, Damon Wayans, George Wallace, Mike Epps, and more.

When Six aspiring improv artists from Mission IMPROVable group moved to Chicago in 1998, they only had one goal—to continue learning and improvising. They continued to showcase their talent across the country until they settled in Los Angeles and bought Mi’s Westside Comedy Theater in April 2009.

It became a training center and a community for stand-up comedians and improv artists. The club is also home to YouTube’s Epic Rap Battles of History.

What to Wear to a Comedy Club? The Dos and Don'ts of Comedy Club Outfits

Women Can Make Anything an Insult. K-Von – Full Special

Women can make anything an insult, especially a compliment. In the full Dry Bar Comedy special from K-Von, he breaks down just how many skills women have that men don’t have and how they can get away with things men could never dream of. Whether you’re a fan of aging gracefully, skinny jeans, or big muscles, this full Dry Bar Comedy special from K-von is sure to keep you laughing from start to finish.

Now that you have a list of the best comedy clubs in Los Angeles, what are you waiting for? Visit each of them one club at a time, and get a chance to see your favorite actors perform live on stage. It won’t be hard to meet a famous actor or comedian in one of these famous Los Angeles comedy clubs!

Who Owns the Comedy Store?

The Comedy Store was started by Sammy Shore and his wife, Mitzi, in 1972. After the divorce, Mitzi got the Los Angeles Comedy Store and influenced many careers through her strategic and unconventional techniques.

What Are Comedy Clubs in LA?

What Is the Most Famous Comedy Club?

Hollywood Improv is the most famous comedy club. Not just in LA but in the United States. It started long before Laugh Factory and Comedy Store became famous. Hollywood Improv was first founded in New York and later became a franchise. The Los Angeles Improv club is a hub for aspiring and professional comedians to hang out and perform together.