The Best Places to Watch Live Comedy in Boston 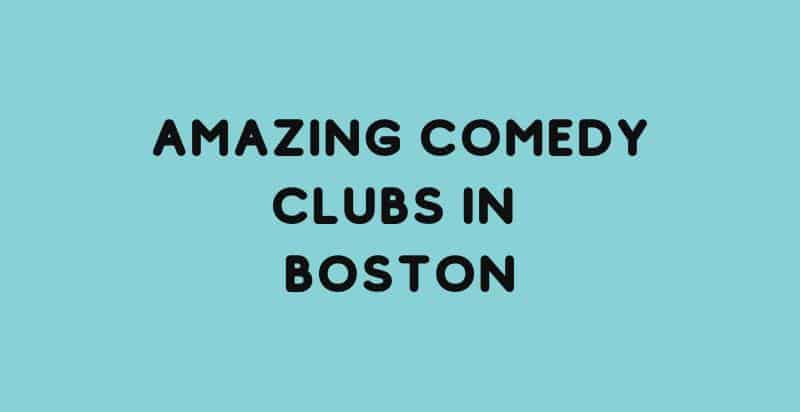 Boston is a city that is known for its comedy scene and for introducing iconic comedians like Lenny Clarke in the 1980s and contemporary comedians like Amy Poehler, Denis Leary, and Conan O’Brien. The city has a comedy scene that promotes new comics and helps them make a name for themselves at Boston’s various comedy clubs.

Boston’s comedy culture is open to up-and-coming comedians, but more experienced and ‘regular’ comedians are much more popular in the city. Any comic who can reinvent live comedy shows and bring something revolutionary to the stage is bound to be praised by audiences in Boston.

Comedy clubs of all sizes exist in Boston. Larger venues are likely to host audiences for famous comedians like Jimmy Fallon, Jay Leno, and Kathy Griffin, while smaller restaurant clubs and comedy venues are popping up around the city, promoting new talent in comedy.

Here Are Some of the Best Comedy Clubs in Boston

ImprovBoston is one of the most revered institutions for comedy in Boston. It has played a significant role in promoting theater arts since the 1980s and is a non-profit arts organization that offers classes, workshops, and so much more for budding comics.

If you are looking for a place where you can find the funniest comedians in the city, you should check out ImprovBoston. With sketch, improv, and stand-up comedy acts available for five nights at the organization, ImprovBoston hosts various audiences, which means you can enjoy a fun night out with your children.

The early evening family shows are best for multi-generational audiences, but you can also enjoy watching up-and-coming comedians at ImprovBoston who want to impress audiences with their satirical and edgy jokes.

If you don’t mind driving outside the city for a fun night out with friends, you should check out Giggles Comedy Club near Route 1. Although the North Shore stretch hosts many dicey motels and chain restaurants, you can enjoy great comedy in some of the establishments. Near the replica of the leaning tower of Pisa, you will be able to find the amazing Prince Pizza. Giggles Comedy Club is situated within Prince Pizza, which means you can eat cheesy slices of pizza as you watch some of the best stand-up legends perform in the club. Giggles Comedy Club is known for hosting some of the best comedians in Boston, such as Lenny Clarke, almost every Friday and Saturday. You can visit the club at the weekend to enjoy great comedy with delicious pizza and inexpensive drinks with your friends.

Laugh Boston is another comedy club that features famous comedians and fresh talent in comedy. Iconic comedians from SNL are regularly featured at Laugh Boston, and you can find Boston classic comics such as Ken Reid typically performing on reccurring nights. Aside from the comedy scene, Laugh Boston makes you feel comfortable as you enjoy the performances of talented comedians and offers a great sandwich, dessert, and snack selection with a full bar. Nevertheless, you must check the schedules carefully at Laugh Boston since they vary throughout the week.

From the North End, Improv Asylum is an incubator for up-and-coming comedians. The resident cast performs every night and involves the audience for a much more entertaining experience. It is recommended you choose the best seats to watch improv and sketch comedy and buy your drinks and food beforehand. This is because you don’t want to miss a single moment of the performance, especially not when you are bound to become the butt of a joke when you re-enter the area.

The resident cast of the club rehearses together and prepares a general sketch for each performance. Taking input from the audience helps comedians add twists and a punch to their comedy that makes every show one-of-a-kind. Midnight shows on the weekends are some of the best ones by the club that are not recommended for the people who are easily offended.

The Comedy Studio shifted from its original location in Harvard Square to Somerville’s Union Square in 2018. Many new comics have gained popularity at this restaurant comedy club, which was known as a scouting ground for new talent by prominent Hollywood personalities. You will be able to find a mix of stand-up veterans and new talent in the club, as there are live stand-up comedy performances every Thursday, Friday, and Saturday. There are no performance restrictions at the Comedy Studio, as you will regularly find political humor, group performances, and new acts on the stage. It is a great place to visit with friends as you can enjoy good drinks and dinner and stay for the comedy performance.

The Boston Sketch Company is performing their show, “No Refunds” at Improv Boston. Watch the actors, director, and head writer talk a little bit about their performance and what audiences can expect.

Laugh Boston is a famous comedy club in Boston. It is a 16+ comedy club where employees of the establishment check visitors’ IDs at the door.

How big is Laugh Boston?

Laugh Boston is a large venue that can seat up to 300 people. The best thing about the space is that it can be catered to any event.

Where can I watch star comedians in Boston?

If you want to watch star comedians like Jimmy Fallon and Kathy Griffin, you should check out The Wilbur. The Wilbur is one of the biggest, and best spaces comics often book for the Boston leg of their tour. However, tickets for shows at The Wilbur are difficult to come by, so you should always book your seats in advance and purchase tickets earlier.

The comedy scene in Boston is alive and flourishing with new talent and iconic veterans who keep delivering outstanding performances. From family-friendly stand-up routines to NSFW midnight improv shows, Boston has everything to offer and more. The list of comedy clubs mentioned in this article consists of some of the best places to visit if you are looking for a fun night out with your friends and want a good laugh to lift your spirits.

For information about comedy clubs in other cities, click on the following links.