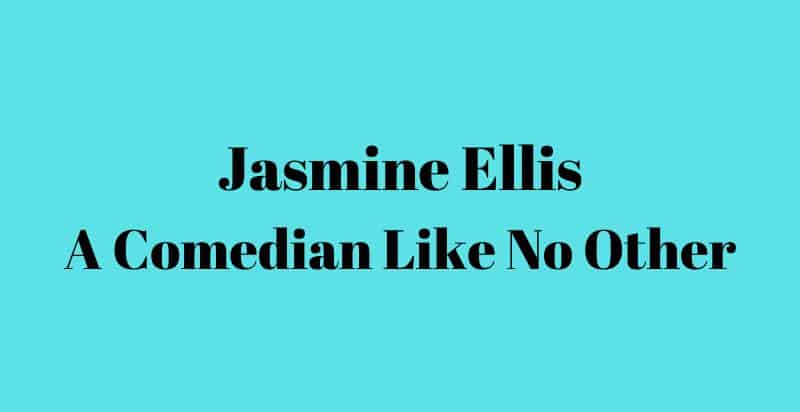 Jasmine Ellis is a standup comedian, podcast host, and an entertainment journalist from Arlington, TX. Over the years, she has garnered quite a bit of fame and fan following thanks to her unique comedy style, which is often described as “joyfully neurotic” and “energetic.”

Curious to know more? Join us as we go through 9 fascinating facts from Jasmine’s career that you probably won’t have heard before.

1. Jasmine Ellis Has Her Own Podcast Series

Standup comedy is not the only achievement this rising comedy star has under her belt, she’s also the host of one of the most unique and fun podcast series you can find on the internet that goes by the name of Rhythm and Bae.

In each 90-minute episode of this podcast, the comedian, former DJ, and an aspiring love guru, Jasmine Ellis, takes her listeners on a musical rollercoaster. Ellis invites a different guest on each episode of the podcast and makes her guests spill the name of 5 songs that describe their life’s story.

Overall, Rhythm and Bae is a hysterical and, most times, a wholehearted podcast that combines guidance and life stories with music and story lessons. The first episode of the podcast aired on 1st January, 2021, and the most recent episode came out on 26th December, 2021. The podcast has put out a total of 32 episodes and is rated 5 stars on Apple Podcasts.

2. The Comedy Star Has Written and Starred in Her Own Comedy Special

Jasmine Ellis: Nobody’s Queen is a TV special comedy script composed by Jasmine Ellis who was also the star of the show. The comedy special was directed by Aaron Stephenson and produced by Angel Studios.

In this 23-minute comedy script, Jasmine Ellis her bold and comical thoughts and views on her being a millennial who has just recently tied the knot. Not only that, she also talks about why the constellations in the sky can make her either the worst employee ever or the best one.

Her side-splitting and enthusiastic performance make this an incredibly entertaining and relatable comedy script, an absolute treat for your eyes and ears.

The TV special comedy script is available on Apple TV, Amazon, Vimeo, YouTube, and various other streaming services. You can even listen to the script on iTunes, YouTube Music, Spotify, Amazon and several other services.

3. Jasmine Ellis Has Been Featured on Breaking Down Bits

Breaking Down Bits is a podcast series hosted by Drew Jordan and Brian Gendron in which the two hosts invite up and coming comedians and discuss some of their greatest comedy bits including how they wrote them.

The podcast aims to provide comedy fans as well as other rising comedians insights and a behind the curtain look into the process that goes into constructing jokes and comedy scripts. A variety of other topics are discussed as well, which vary from guest to guest. To date, the podcast has rolled out 52 successful episodes, with the last one coming out on 30th March, 2022.

Jasmine Ellis was the comedy guest on the 35th episode of the podcast which premiered on 22nd June, 2021. In this almost 1-hour episode, Ellis and the hosts go over several topics which included using social media platforms like TikTok to build a fan following. They also went over what it’s like to perform before different audiences such as an audience that likes clean comedy.

In addition to this, they also talked about how to stay genuine and original while remaining relatable to the audience. The hosts and Ellis also watched a clip from Ellis’ comedy special, Nobody’s Queen, and discussed some behind the scene elements of scripting the comedy special.

4. Ellis Started Her Career Back in College

Back when Ellis was still in college pursuing her degree in communication and broadcasting, she would often interview comedians and host local radio shows. After being convinced by a friend in 2013, Ellis decided to have a go at open mics performing scripts and material she and her friend had worked on together.

Since then, the comedian took a fancy to doing standup and open mics. She kept working on developing style, voice, and tone as well as growing her set and the rest is history.

5. The Comedy Star Was Heckled During One of Her Performances

On being asked whether or not the comedian was ever heckled, during an interview, Ellis admitted that she was indeed heckled during one of her performances and went on to share the details of the event.

During one of her shows in East Dallas, one of Ellis’ male audience members walked up to her while she was on stage and said some discouraging things such as how he thought that Ellis was a radio and wanted to turn off the radio and play some music instead.

While such an experience may have a major toll on some people, Ellis shook it off as a minor setback and kept focusing on her comedy career.

6. Jasmine Has Been Featured in Many of the Top Comedy Festivals

In addition to being featuring and headlining at colleges and clubs throughout the Southwest, Ellis has performed in several comedy festivals including Bird City, a Phoenix, AZ originated comedy festival showcasing some of the finest talents in improv, standup, sketch, and storytelling. The festival has hosted some very big names in the entertainment industry such as Aparna Nancherla, Dana Gould, and Jackie Kashian.

Moreover, the talented woman has also been featured on 10,000 laughs, the largest comedy festival in Minnesota featuring some of the best standup comedians in the country. Some other comedy festivals Jasmine has performed in include Altercation Fest, Black Girl Giggles, Limestone, Out of Bounds, Blue Whale, and the Netflix sponsored Moontower Comedy Festival. She was also a semifinalist in the HBO sponsored Comedy Wings – American Black Film Festival.

8. Ellis Was the Co-Host of Extra Salty

Extra Salty is a podcast series that takes a deeper look into the emotions behind letting go of and holding on to resentment. The show was created and hosted by Jasmine Ellis and a fellow comedian called Ky Krebs.

The show began on 23rd August, 2017 and rolled out its last episode on 26th April, 2019. A total of 35 episodes were released and the show is rated 5-stars on Apple Podcasts.

Kevin Hart is a name that comedy and movie lovers are all too familiar with. From being one of the greatest comedians in the industry to working on some of the biggest films in Hollywood, Hart is one of the most popular and loved actors and comedians in America.

On 9th August, 2019, Jasmine, representing Dallas Entertainment Journal, sat with Hart and the two talked about health and fitness as well as why Kevin, being an extremely busy person, is committed to fitness.

The Best Job in the World. Jasmine Ellis – Full Special

Jasmine Ellis is an energetic standup comedian from Arlington, TX. Her fans love her for her out-of-the-box sense of humor and scripts. The comedian has often been hailed as one of Austin’s top up-and-coming comedians and it’s safe to say that the woman is on her way to achieve unprecedented heights of fame and success in the entertainment industry. Be sure to check out her performances if you haven’t seen them already and you’ll surely fall in love with her.

Gene Pompa – A Comedian from SoCal