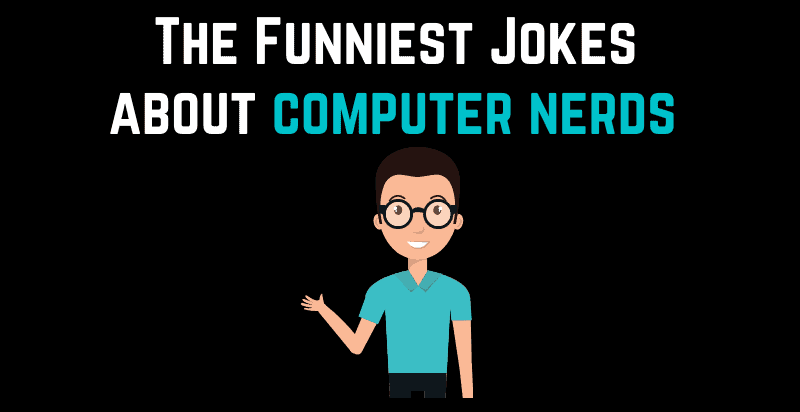 Computer nerds are a special and unique breed. If you have any computer nerd colleagues or friends you probably know that nerds are the unsung heroes of our time. As we all know, they spend a lot of time on their computers. They use their computers for all sorts of things, like playing games, watching videos, and browsing the internet.

Some computer nerds are just interested in technology and how it works. Others are more focused on the social aspects of the internet, like how they can connect with other people online. Computer nerds may have a difficult time communicating with people outside of their field.  And that is why they make for funny jokes!

The Funniest Jokes about Computer Nerds and Programmers

How Did the Programmer Get Stuck in the Shower?

The programmer got stuck in the shower because the instructions on the shampoo bottle said: Lather, Rinse, Repeat.

Why is it that programmers always confuse Halloween with Christmas?
Because 31 OCT = 25 DEC.

If it weren’t for C, we’d all be programming in BASI and OBOL.

How does a tree use a computer?
It logs on

What did the computer do at lunchtime?
Had a byte to eat

Why did the computer keep sneezing?
It had a virus

Why was the computer cold?
It left its Windows open

Why did the developer go broke?
Because he used up all his cache

Which computer sings the best?
A Dell

Why did the computer show up late for work?
It had a hard drive

What do you get if you take your computer to an ice rink?
A slipped disk

How can you tell if a computer geek is an extrovert?
They stare at your shoes when you talk instead of their own

What does a proud computer call his little son?
A microchip off the old block

How many programmers does it take to change a light bulb?
None. It’s a hardware problem

Why do programmers always mix up Halloween and Christmas?
Because 31 OCT = 25 DEC.

What is another name for a computer virus?
A terminal illness.

Why did the programmer use the entire bottle of shampoo during one shower?
Because the bottle said “Lather, Rinse, Repeat.”

Why can’t cats work on the computer?
They get too distracted chasing the mouse around.

What did the chemist say when he found two new isotopes of Helium?
HeHe.

What is the first derivative of a cow?
Prime rib

What did Al Gore play on his guitar?
An Algorithm

What does the little mermaid wear?
An algae-bra

How does one insult a mathematician?
Tell them that their brain is smaller than any ε > 0

What is the difference between a Ph.D. in mathematics and a large pizza?
A large pizza can feed a family of four

A word in this sentence is misspelled. What word is it?
Misspelled, duh.

Why do Java programmers have to wear glasses?
Because they don’t C#

What do you call a programmer from Finland?
Nerdic

How many Microsoft technicians does it take to change a light bulb?
Three. Two to hold the ladder and one to hammer the bulb into a faucet

Related: The Most Hilarious Jokes about Math