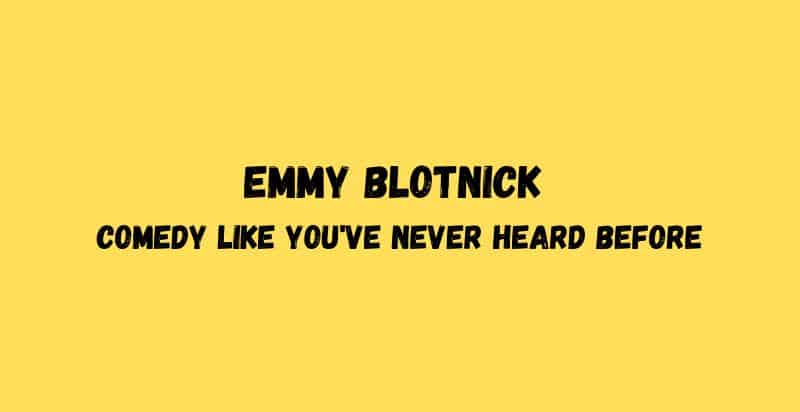 Emmy Blotnick is a rising comedy star who has been garnering the attention of comedy fans, contemporaries and talk show hosts like nobody’s business! Not only that, but she was also featured as a “New Face” at Just for Laughs in Montreal and was named one of Comedy Central’s Comics to Watch.

Her sweet, charming and relaxed style of comedy has been winning hearts and ears all over America. One thing is for sure, the up-and-coming comedy star is on her way to big things.

Let’s take a look at 9 career facts of Emmy Blotnick to see just how far she’s come on her journey to the top!

1. Emmy Blotnick Has Appeared on The Late Show with Stephen Colbert

The Late Show with Stephen Colbert is a hit late night talk show hosted by the improv, actor, and comedian Stephen Colbert who also happens to be the writer and executive producer of the show. The comedy-variety-talk show premieres an episode five nights a week and is recorded live in the Ed Sullivan Theatre in New York.

Stephen took over as the host of the show back in 2015 and till now has led a total of 7 successful seasons and about 1,200 great episodes. On 13th March, 2018 Emmy Blotnick was featured on the show where she made her network television debut.

Her performance included a variety of jokes such as how a lady’s wrong answer on the wheel of fortune led Emmy to discover a name for her lifestyle.

2. Emmy Was Also a Staff Writer on The Late Show with Stephen Colbert

Her network television debut is not the only thing that links Emmy to The Late Show with Stephen Colbert, Emmy Blotnick was also a staff writer on the aforementioned show for over a year. She worked on the show from 2018 to 2019 and helped write 164 episodes.

3. Emmy Blotnick Has Been on The Hilarious World of Depression

The Hilarious World of Depression is a podcast show hosted by the public radio host and a veteran humorist, John Moe. The show centers around clinical depression but in a light and inoffensively humorous manner in order to encourage those suffering from the disease to speak about it and embrace it more openly.

The show involves a series of sentimental, honest, and hilarious conversations with some of the top comedians in the industry who suffer or have suffered from the disease. The show premiered its first episode on 12th December, 2016, and since than has put out a total of 97 episodes with the final one coming out on 4th August, 2021.

On 27th April, 2020, Emmy Blotnick was featured on The Hilarious World of Depression. In this episode, she and the host talked about how Emmy’s road to success involved her dealing with depression that manifested itself in some very unusual ways such as culinary catastrophes involving kidney beans, pumpkin puree, and butternut squash soup. However, thanks to EDMR therapy and relentless hard work, she overcame this adversary.

4. The Rising Comedian Was a Guest on Everyday Decisions with Jo Firestone

On 7th April, 2020, Emmy was invited on the Everyday Decisions with Jo Firestone podcast show hosted by her comedian friend, Jo Firestone.

The crux of the show are the discussions the host has with other comedians, musicians, authors, and other artists about the abnormalities in their daily routines.

In the seventh episode of the series, Jo and Emmy catch up about their day-to-day lives during quarantine and talk about what it’s like to tell jokes in the middle of a pandemic and more.

5. The Comedy Legend Has Been on The Tonight Show Starring Jimmy Fallon

The Tonight Show Starring Jimmy Fallon is a popular American talk show in which Jimmy Fallon – the hot of the show – interviews and plays games with different celebrities on each episode. The show also often features musical, comedy, and magic performances. Jimmy Fallon took up the mantle back in 2014 and till now has hosted around 1,600 episodes and 9 blissful seasons.

On 19th April, 2021, Emmy was invited on the show to perform her comical bits. Her short performance was focused around her weighted blanket and the outlandish complications it adds to her life.

6. Emmy Blotnick Was a Head Writer on The President Show

Comedy Central’s The President Show was an American comedy talk show that ran from 2017 to 2018. In each episode of the show, Anthony Atamanuik the lead actor and creator of the show conducts desk segments and guest interviews while impersonating one of America’s most controversial presidents ever, Donald Trump.

The first episode of the show aired on 27th April, 2017 and the last episode came out on 22nd October, 2018. A total of 23 episodes were released. Emmy Blotnick worked as a head writer on the show and helped write 22 out of the 23 episodes.

TBS Conan is another immensely popular American talk show hosted by the comedy icon Conan O’Brien along with his co-host Andy Richer. The show revolves around the two hosts discussing recent current news and headlines as well as interviewing different actors, musicians, comedians and other famous personalities and entertainers.

The show took off in 2010 and since then TBS Conan has putout around 1,500 episodes and 11 great seasons. On 20th August, 2018, episode 97 of season 8, Emmy Blotnick was featured on the show where she performed one of her short comedy scripts.

Her performance was mainly focused on her experiences dating men that were comic book fans and her advice to other women on the same. She also joked about her current boyfriend who is a giant of a man.

8. The Comedic Writer Also Wrote for Not Safe with Nikki Glaser

Not Safe with Nikki Glaser is a free-form avenue where Nikki Glaser, a comic and curious perv, analyses relationship and dating matters through a mixture of roundtable discussions, social experiments, and field studies.

The show aired in 2016 and lasted for only a single season producing 20 episodes in total. Emmy Blotnick worked as a writer on the show and co-wrote 15 episodes of the show.

9. The Standup Comedian and Writer Has Been Featured as a Guest on Many Podcasts

In addition to The Hilarious World of Depression and Everyday Decisions with Jo Firestone the comedian has been invited on countless other podcast shows.

Stand-up comedian Emmy Blotnick noticed an error visible not only in the lyrics of Fifth Harmony’s ‘Sledgehammer,’ but also the title.

Emmy Blotnick is a young comedy talent who is rapidly gaining popularity and recognition throughout the entertainment industry. Going from being a staff writer on TBS Conan to scoring her own half hour stand-up special on Comedy Central, we can say with certainty that comedy star is on her way to the top and the future looks very bright for her.

With that said, be sure to check out her performances and podcast appearances to get an even better idea of her comedy style and personality as a whole. We guarantee that you’ll fall in love with her sweet and charming personality.

Related Up and Coming Comedians To Read About: