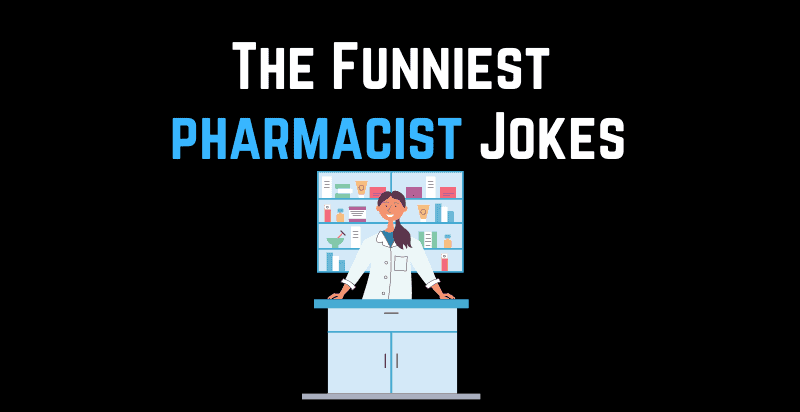 Pharmacists deal with many difficult and sensitive situations every day. Jokes, which are often used as a coping mechanism, can be used to help ease tension in the workplace. Pharmacy jokes tend to be more taboo than other jokes because they deal with such sensitive topics such as death and people’s health.

Pharmacists are often the butt of jokes. Not only are they responsible for dispensing medicine, they also provide health information and teach people about their prescriptions. The jokes tend to revolve around three areas: their intelligence, the difficulty in pronunciation of their profession, and how often they dispense medication.

These are some really silly ones to get started…

Pharmacy and Pharmacist Jokes – One Liners and Short Jokes

A pharmacist walks out of the store and sees a guy with his arm cut off. He asks if he can help, and the guy replies “Yes, can you give me some painkillers?”

Two pharmacists walking down the street see a guy on fire. One says: “Don’t worry! I got this!” and grabs a bucket of water and throws it at him.

My Italian friend is a pharmacy student, and his favorite antibiotic is amox-Sicily-n.

I bought a really expensive laxative from the pharmacy.
It gave me a good run for my money.

James had been retired for a year when his wife of fifty years suggested one day, “Why don’t we take a cruise for a week and make wild passionate love like we did when we were young?” He thought it over and agreed.

He put on his hat and coat and went down to the corner drug store. He stepped up to the counter and asked for a bottle of seasick pills and a box of condoms. Upon returning home his wife greeted him at the door saying, “You know dear, I’ve been thinking it over and I see no reason why we couldn’t manage a month long cruise so we could relax and make wild passionate love like we did when we were young.”

He smiled, turned around and went back to the pharmacy. He stepped up and ordered 12 bottles of seasick pills and a dozen boxes of condoms.

Upon returning back home his wife met him on the porch with a big smile on her face. “Jim, I have a marvelous idea. You know, now that our children are all on their own, there’s nothing to stop us from cruising around the world.”

“I’ll be right back,” he said. Back to the drug store he went. When he approached the pharmacy counter the druggist looked up with a puzzled grin. Jim sheepishly ordered 297 bottles of seasick pills and the same number of boxes of condoms.

The startled pharmacist busied himself filling the order then passed the wrapped package across the counter saying, “You know, Mr. Smith you’ve been doing business with me for over thirty years. I certainly don’t mean to pry, but if it makes you that sick, why do you keep doing it?”

Pills of the Future

A somewhat advanced society has figured how to package basic knowledge in pill form. A student, needing some learning, goes to the pharmacy and asks what kind of knowledge pills are available. The pharmacist says, “Here’s a pill for English literature.” The student takes the pill and swallows it and has new knowledge about English literature!
“What else do you have?” asks the student. “Well, I have pills for art history, biology, and world history,” replies the pharmacist. The student asks for these, and swallows them and has new knowledge about those subjects.

Then the student asks, “Do you have a pill for math?” The pharmacist says “Wait just a moment”, and goes back into the storeroom and brings back a whopper of a pill and plunks it on the counter.

“I have to take that huge pill for math?” inquires the student. The pharmacist replied “Well, you know… math always was a little hard to swallow.”

A woman walks into a drug store to buy tampons one morning. She notices a group of tampons stacked on a table in the corner with a sign on them saying: “5 boxes for a dollar.”

Well, the woman just could not believe this price so she asks the clerk if it was correct.

The pharmacist replied, “Oh yes, 5 for a dollar.”