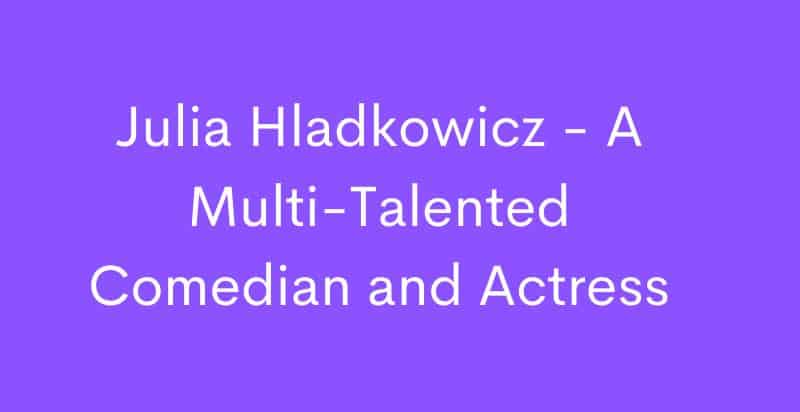 Julia Hladkowicz is arguably one of the best comedians and actresses in LA. With biting sarcasm and sharp wit, she is wildly popular amongst her fans, who love her charm, grace, and humor.

Julia Hladkowicz has toured almost the whole of North America and has established a dominant presence in clubs and festivals. Let’s look at what makes this immensely talented comedian so intriguing.

Julia Hladkowicz has been interested in the field of comedy for a long time. She joined an arts high school in Ottawa for her drama classes, where she started gearing towards comedic acting. To keep up with her performance, she was constantly writing satirical bits and pieces on the improv team.

She wanted to go on further and join theatre school, but she couldn’t get into her desired choice. However, she went to Humber College instead to further develop her comedic writing. This led her to being a stand-up comedian, something that she hadn’t given much thought to initially. Fortunately, she began to devote herself to stand-up, which made her the talented star that she is now.

2. Julia Hladkowicz Was Featured in “Just for Laughs”

“Just for Laughs” is a popular tv show that is universally loved by children and adults alike. Julia Hladkowicz has also featured in this show. She describes her experience as “very magical,” as it was one of her significant life goals. She has also collaborated with famous comedians like Tom Green and Andy Dick on the show.

3. Julia Hladkowicz Has Been Nominated and Won Many Awards

It comes to no one’s surprise that Julia Hladkowicz’s talent in comedy has bagged her various awards. She has won three major awards, which are the Hogtown Comedy Festival Directors Award, 2008 Fresh Meat Showcase Nomination, and the prestigious Brian Linehan Scholarship Award.

4. Julia Hladkowicz Is Inspired by Many Female Comedians

The world of comedy is generally considered male-dominated, yet that didn’t stop Julia Hladkowicz from excelling. She admires many female comics, especially Maria Bamford, who is a comic legend. Julia also likes to watch Jen Kirkman, who is a comedian as well as an activist.

Furthermore, she loves other comics like Nikki Glaser and Gina Yashere, who are renowned in the field of comedy. The added pressure of being a woman in a male-dominated industry makes her even more determined to make her way forward.

5. Julia’s Comedy Album Was Once #1 on iTunes Comedy

Julia Hladkowicz’s comedy album, named “LAD-KO-WITS,” was her debut in this field. The album was an instant hit and reached the number 1 spot on iTunes Comedy when it was released. She now has a new podcast, “Is This What You Want?” on iTunes.

6. Julia Hladkowicz Has Toured the Whole of North America

Julia Hladkowicz started gaining popularity everywhere she went. She received multiple invites to perform at clubs all over North America. She has been invited to San Francisco Sketch Fest and Laughing Skull Comedy Competition held in Atlanta.

Moreover, she was invited to the North by North East (NXNE) music festival, the Canadian Organization for Campus Activities (COCA), the APCA, and the Seattle International Comedy Competition. In all these events, she did remarkable performances that were lauded by everyone.

7. Julia Hladkowicz Has Appeared on TV Many Times

We know that Julia Hladkowicz has a regular appearance in Just for Laughs. However, that is not her only TV appearance. She has also appeared in “Curb Your Enthusiasm” along with Jeff Schaffer. Her TV appearances also include Comedy Network, Much Music’s Video on Trial, MTV, PBS, Conan, and Kevin Hart’s LOL Network.

Here is a video of Julia Hladkowicz sharing her hilarious experience of being bullied by a five-year-old.

Julia Hladkowicz is a phenomenal comedian who will keep pushing herself to make others laugh. Comedians and fans praise her witty style of comedy and her well-timed delivery that is extremely charming. Her hard work, dedication and enormous talent is sure to take her far and wide and will definitely make her an unforgettable name.