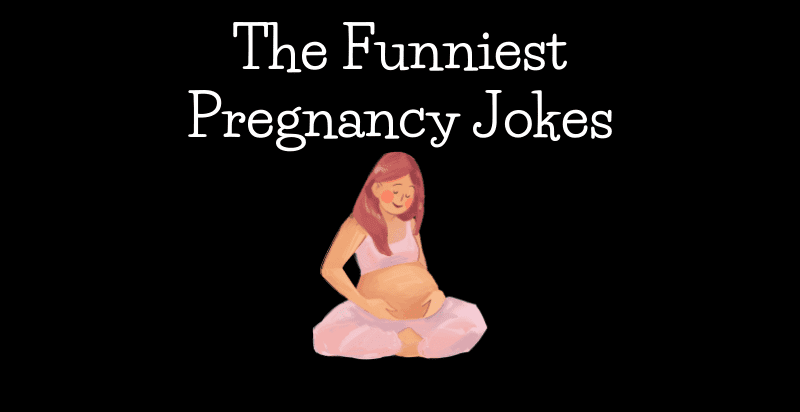 Pregnancy is a joyous occasion, yet can be rough and somewhat unnerving towards the end of the trimester. I mean between dealing with morning sickness and swollen ankles, a woman deserves to be cranky!

To help you forget about the discomforts of pregnancy, we’ve compiled our list of most hilarious Pregnancy jokes. Guaranteed to get you laughing so hard, your worries and pains will dissipate. They are also great topics of conversation for your spouse, family, and loved ones as well!

1. “The stork is the bird that helps deliver babies. What bird helps prevent pregnancy? Answer: The swallow.”

2. “My wife gained more than 100 pounds during pregnancy, so I started walking 5 miles every day to encourage her. It’s been three months and now I’m over 300 miles away from home.”

4. “I used to work on an assembly line making pregnancy pamphlets, but I quit. I got tired of labor manuals.”

5. “Some women bounce back quickly after pregnancy, some just bounce!”

6. “What’s the most common pregnancy craving? Answer: For men to be the ones who get pregnant.”

7. “What should a joke have in common with a pregnancy? Answer: A good delivery.”

8. “How do you call unexpected pregnancy in German? Kinder Surprise!”

9. “Is there anything, in particular, I should avoid in the aftermath of childbirth? Answer: Yes. Pregnancy.”

10. “What do a pregnancy test and hummus have in common? Answer: They both require chickpea!”

11. “C sections are like the DiGiorno of pregnancy. Because it’s not delivery.”

12. “What do people really mean when they say “congrats” on your pregnancy? Answer: Nice work doing what teenagers manage to do by accident every day!”

13. “Why did the run-on sentence take a pregnancy test? Answer: Its period came too late.”

15. “What’s the weirdest stage of pregnancy? Answer: When people aren’t sure whether to congratulate you or buy you a gym membership.”

16. “How did Burger King get Dairy Queen knocked up? Answer: He forgot to wrap his whopper!”

17. “What’s the proper punctuation for a negative pregnancy test? A period.”

18. “Before pregnancy, I slept on my stomach! During the time of pregnancy, on the side! After giving birth, I can sleep even while standing!”

19. “A blonde at the pharmacy: Please give me a pregnancy test. Then the pharmacist asks: Which one do you want? One that is more expensive or one that is more reliable? Then she replies: I don’t care. The main thing is that it should be negative.”

Also see jokes about being pregnant

20. “What’s the weirdest stage of pregnancy? Answer: When people aren’t sure whether to congratulate you or hand you some Gas-X.”

21. “Bob Ross wasn’t a planned pregnancy, he was a happy little accident!”

22. “A man is thinking about a pregnancy test and suddenly remembers how his mother used to say as a child, putting on pants on him: Son, remember, two stripes are a fool!”

24. “I recently learned that goats can have what’s called a “phantom pregnancy.” It’s when their body thinks it’s pregnant when it isn’t. I kid you not!”

25. “What’s better than eating for two during pregnancy? Answer: Shopping for two!”

Related: The funniest Your Mama Jokes

26. “How do you define pregnancy? Answer: A nine-month-long hostage situation where you are both the hostage and the building.”

27. “We all make mistakes! (Quoting Your Parents During Pregnancy).”

29. “How does being pregnant make you feel? Answer: Like a superhero. Well, a really tired, weak superhero who wants to eat all the time and isn’t allowed to lift heavy objects.”

30. “On the First Day of Christmas, my True Love Gave To Me… An accidental pregnancy.”

31. “I’m two months into my pregnancy now. When will my baby move? Answer: With any luck, right after it finishes college.”

32. “Since I became pregnant, my breasts, rear end, and even my feet have grown. Is there anything that gets smaller during pregnancy? Answer: Yes, your bladder.”

34. “Mom always told me to be positive. So in a way, this pregnancy test is actually her fault.”

35. “My childbirth instructor says it’s not pain I’ll feel during labor, but pressure. Is she right?” Answer: Yes, in the same way that a tornado might be called an air current.”

36. “Waiting for a baby to be born is like picking up someone from the airport. But you don’t know who they are or what time their flight comes in.”

37. “What is one positive thing that’s actually really negative? A pregnancy test!”

38. “When is the best time to get an epidural? Answer: After the first trimester!”

40. “I was a bit worried so I took a pregnancy test. My mom will be proud, this is my first time passing a test!”

41. “Do I have to have a baby shower? Answer: Not if you change the baby’s diaper very quickly.”

42. “Yelp review for pregnancy: One out of five stars, took way too long, overpriced, really uncomfortable, too crowded, aesthetically a mess, and no alcohol.”

43. “what animal has the lowest pregnancy rate? Answer: The pull-out-a-puss!”

44. “Today at the pharmacy I saw a woman without a face mask buying a pregnancy test. She clearly isn’t a fan of protection!”

45. If heartburn during pregnancy means you’ll have a hairy baby. Then I’m about to give birth to Chewbacca”

46. “Unless you are a pregnancy test, take your negativity elsewhere.”

47. “My friend is buying a pregnancy test kit for his girlfriend! Congratulations either way.”

48. “I know my baby is going to be an overachiever. I reached my healthy weight gain limit in the first trimester.”

49. “Why Does Italy Have Such A Low Teen Pregnancy Rate? Because the kids learn in Italian history to always pull out!”

51. “What position should the baby be in while in the ninth month of pregnancy? Answer: Head down, pressing firmly on your bladder!”

52. “The more my pregnancy advances the more people smile at me why is that? Answer: Because you are fatter than they are!”

53. “I was going to type up this joke about pregnancy, but then I realized it was all about the delivery.”

So Many Meditation Jokes

54. “I just urinated on a pregnancy test,” said my girlfriend. “I’m pregnant. Are you going to keep it? I asked. She said, “No, it stinks like wee-wee.”

55. Nigel Farage gets his girlfriend pregnant. Soon after the pregnancy test arrived as positive, he says “My fatherhood ambition has been achieved. I want my life back!”

57. “What do you call an accidental pregnancy in Canada? Answer: A Tinder egg.”

58. “You don’t have to study for a pregnancy test. But I have heard there’s a lot of cramming that goes on before the exam.”

59. “Two blondes talking… “I took a pregnancy test the other day…” “Oh dear, were the questions hard?”

60. “How do you know kidney stones are worse than pregnancy? Answer after a kidney stone, nobody says “let’s have another”!”

61. “What do you call a pregnancy that starts while using birth control? Answer: A misconception!”

62. “Congratulating random women on their pregnancy is always a hit or miss scenario.”

63. “If you want to prevent pregnancy, use two condoms and fill with chili powder in between. If the outer one breaks she will know if inner one breaks you will know!”

64. “What’s common between hide-and-seek, and an unintentional pregnancy? Answer ready or not, here I come!”

65. “What do pregnancy and a burned cake have in common? Answer: You should’ve taken it out earlier.”

Did those Pregnancy Jokes get the baby moving around from your bouts of laughter? Good, that is exactly what we were trying to achieve!

Sure, a full 9 months can be tolling to the body, but there’s an easy fix called laughter. The next time the pregnancy blues come your way, pull out our above collection and laugh until your heart’s content!