Soccer Jokes To Make You Laugh 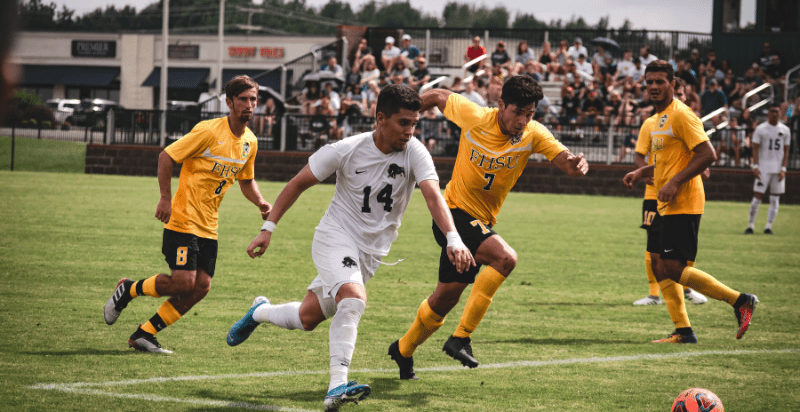 Did you know that soccer has over 4 billion fans across the globe and has evolved into the most popular sport in the world. Since the majority of the world follows soccer, these funny jokes about soccer are ones you can share with just about anyone.

Whether you are watching a local match, playing on a local soccer field, or watching the World Cup, if you read and memorize some of these, you will always have a joke to share with your fellow soccer fans!

What is a ghost’s favorite soccer position?
Ghoul keeper

Why don’t grasshoppers watch soccer?
They watch cricket instead

What kind of tea do soccer players drink?
Penal-Tea

What position do ghosts play in soccer?
Ghoulie

Where do soccer players go to dance?
The Futball

What is it called when a dinosaur gets a goal?
A dino-score

What lights up a soccer stadium?
A soccer match

Why did the soccer ball quit the team?
It was tired of being kicked around

What runs around a soccer field but never moves?
A fence

What do soccer referees send during the holidays?
Yellow cards

Why do goalkeepers spend ages on the Internet?
Because they can’t stop saving their work!

Why can’t Cinderella play soccer?
Because she always runs away from the ball

Why do soccer players do so well in school?
They know how to use their heads

What’s the best state to shop for a soccer uniform?
New Jersey!

You are locked inside a car with nothing but a soccer ball. How do you get out?
Unlock the door and pull the handle!

What are successful forwards always trying to do?
Reach goals!

How do soccer players stay cool during a game?
They stand near the fans!

How do birds cheer for their soccer team?
They egg them on!

Did you hear about the soccer player who lived passed a 100?
He’s still alive and kicking!

Where do soccer players dance?
At a soccer ball!

Can the goalkeeper catch the baby?

A soccer goalkeeper was walking along the street one day when he heard screams from a nearby building. He looked up to see smoke billowing from a fourth-floor window and a woman leaning out holding a baby.

“Help ! Help!” screamed the woman, “I need someone to catch my baby!”

A crowd of onlookers had gathered, but none was confident about catching a baby dropped from such a great height. then the goalkeeper, stepped forward. “I’m a professional goalkeeper,” he called to the woman. “I’m renonwned for my safe hands. Drop the baby and I will catch it. For me, it will be just like catching a ball.”

The woman agreed:”Ok, then. When I drop my baby, treat it as if you were catching a ball.”

On a count of three, the woman dropped the baby. Everyone held their breath as the goalkeeper lined himself up to catch it. There was a huge sigh of relief, followed by wild cheering as the goalkeeper caught the baby safely in his arms. Then he bounced it twice on the ground and kicked it 50 yards down the street.

God, always fair, told the devil, ‘The heat must be affecting your brain, the game would be so one sided, don’t you know all the “good” players go to heaven?”

The devil, smiling, responded “Yeah, but we’ve got all the refs’…”

If You Want More Sports Jokes, see our related pages: