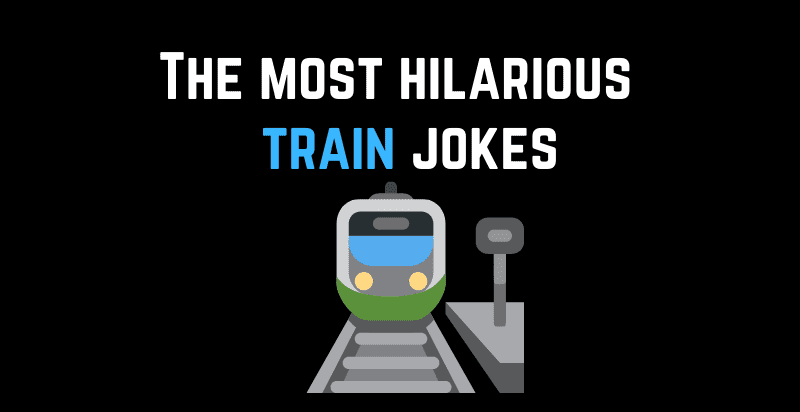 Train jokes are a popular genre of jokes that poke fun at the idea of riding on a train. Train riders who have to put up with delays and overcrowding, as well as those who have to deal with the general chaos and disorder on trains, often find these types of jokes funny.

Funny One Liner and Short Jokes about Trains

How do locomotives hear? Through their enginears.

The conductor was right in the middle of his presentation when he lost his train of thought. Embarrassed, he quickly disembarked the room.

Did you know that train conductors make great thieves? They’re really good at covering their tracks.

I was able to pick up a few railway buffers for cheap the other day. I took advantage of an end of the line sale.

It’s always great working with a train conductor. They’re always ready to take one for the steam.

What does a monster see when it sees a train full of passengers? A chew chew train.

Conductors can be quite intimidating when you get them angry. Make sure you don’t yank their train!

Everyone seems to have a crush on the train conductor. She’s quite at-track-tive.

There’s a guy I know who has been a big fan of monorails since he was little. I guess he’s just really into one liners!

Never liked the troll who lives under the local railway bridge. He’s my arch enemy.

I went for a walk along the railroad tracks, but then I suddenly felt run down.

I used to be a railway engineer but I kept losing my train of thought and going down the wrong track.

A young man has just told me about a great offer on railway buffers. Apparently, it’s an end of line sale.

Even the toughest train engineer needs a brake to let off some steam.

A railroad conductor needs to make sure he doesn’t go down the wrong track and lose his train of thought.

No one would ever find out how hard he trained, because he never got a platform to share it.

A locomotive conductor can only think of one thing at a time. They all have one track minds.

The train company had safety issues for years but were always able to cover their tracks.When things look bad you just have to keep calm and carriage on.

I had a friend who quit his gig as a newspaper reporter and took a train out of town. The ex-press train.

Why can’t train engineers get electrocuted? They’re not the conductor.

No matter where you are, you’ll never see happy railroad tracks. Too many people have crossed them.

What’s one easy way to tell if a train just passed? It leaves tracks.

Did you hear about the man who took the 6 o’clock train home? The police made him give it back.

I swear train conductors never get in trouble. They always seem to have a get out of rail free card.

I always like chewing gum on the train. Unlike teachers, locomotives always tell you to choo choo.

I was going to ask the conductor a question when he walked by, but I was too afreight to ask.

I went to a throwback party at the train station. Everyone had on platforms.

No matter what, the train I regularly take home is always late. It’s a slowcomotive.

Train drivers are quite clever and known for their engine-uity.

The train conductor was feeling silly and decided to wear platform shoes to work.

I’ve always been a big fan of a funny one-liner. I guess that’s why I like monorails so much!

Being a train driver is more difficult than it looks. Every detail needs to be kept track of.

The conductor kept telling me funny train puns, and it was hard to keep a freight face.

How do locomotives hear? Through their engineers.

It’s difficult to find anyone with more focus than a conductor. They have complete tunnel vision.

How does a train avoid detection? It covers its tracks.

I once asked a conductor how many times a train he was on had gotten derailed. He told me it was hard to keep track.

I tried to get a job as a railway conductor, but they didn’t think I had enough training.

When the train engineer decided he wanted to run for office, he put the development of brailways for the blind as his main priority.

What did the mother steam engine say to her baby to get her to eat? “Here comes the choo choo train!”

How do you find a missing train? Hire an expert to follow the tracks.

What do you call a locomotive that keeps sneezing? Achoo choo train.

Railroad workers aren’t what they used to be. I remember in the good old days all the conductors were a little loco and full of self e-steam.

Why do trains take so long to arrive on Halloween? They’re running with a skeleton service.

If you spend too much time walking on railroad tracks it might leave you feeling run down.

The conductor has never missed a day of work in over 20 years on the job. He was there come train or shine.

You can always tell when a train driver is stressed because they bite their rails.

The conductor was right in the middle of her presentation when she lost her train of thought. Embarrassed, she quickly disembarked from the room.

Did you know that train conductors make great thieves? They’re really good at covering their tracks.

I was able to pick up a few railway buffers for cheap the other day. I took advantage of an end-of-the-line sale.

It’s always great working with a train conductor. They’re always ready to take one for the steam.

What does a monster see when it sees a train full of passengers? A chew chew train.

A friend of mine quit his job as a reporter and left town by railway. It was an ex-press train.

I asked a train engineer how many times his train had derailed. He said, “I’m not sure, it’s hard to keep track.”

I like to share a train pun or one-liner. I’ve always been driven by the joy of monorails.

Well, one thing I’ll say about ticket inspectors is that you’ve certainly got to hand it to them.

Some Hilarious Story Jokes about Trains

The mother was just devastated, so she scolded her son and said to him, “Now son, I want to go upstairs and take your nap, and when you get up, you can’t play with your train set for two hours.” So the boy took his nap and didn’t even mention his train set for two hours. After the two hours were up, the boy asked his mom if he could play with his train set again. She said yes, and asked him if he understood why he was punished. He nodded his head yes, and off he went. The mother stood by door to listen to what her son would say.

Related: Jokes about Bicycles and Cycling

In a terrible accident at a railroad crossing, a train smashed into a car and pushed it nearly four hundred yards down the track. Though no one was killed, the driver took the train company to court.

At the trial, the engineer insisted that he had given the driver ample warning by waving his lantern back and forth for nearly a minute. He even stood and convincingly demonstrated how he’d done it. The court believed his story, and the suit was dismissed.

“Congratulations,” the lawyer said to the engineer when it was over. “You did superbly under cross-examination.”

“How’s that?” the lawyer asked.

“I was afraid he was going to ask if the damned lantern was lit!”

Related: The Funniest Jokes about Cars

Roy is applying for a high paying executive job at the railroad and during the interview, an inspector asks him, “What would you do if you saw two trains were heading towards each other on the same track?”

Roy says, “I would switch one train to another track.” “What if the lever broke?” asks the inspector.

“Then I’d use the manual lever.” answers Roy.

“What if that had been struck by lightning?” asks the inspector.

“I’d use the phone to call the next signal box.”

“What if the phone was busy?”

“I’d use the public phone near the station.”

“What if that had been vandalized?”

The inspector asked, “Why would you do that?”

“Because Carla has never seen a train crash.”

Also see the most hilarious jokes about airplanes and flying

A man and a woman who have never met before find themselves in the same sleeping carriage of a train.

After the initial embarrassment, they both manage to get to sleep; the woman on the top bunk, the man on the lower. In the middle of the night the woman leans over and says, “I’m sorry to bother you, but I’m awfully cold and I was wondering if you could possibly pass me another blanket.”

The man leans out and, with a glint in his eye, says, “I’ve got a better idea… let’s pretend we’re married.”