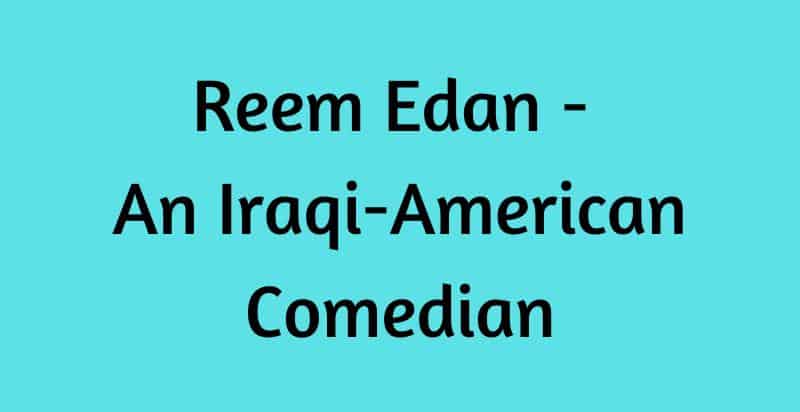 Reem Edan brings a lot of ingenuity and diversity to the world of stand-up comedy. She is an Iraqi-American comedian, actor, and writer who has performed in several major locations in Los Angeles. Her ethnic background has opened a lot of avenues for her.

Reem has had collaborations with many famous comedians. She is often seen on tours at clubs and colleges all over the United States. Let’s take a deeper look at this insanely talented comedian.

Reem Edan is no stranger to international tours. She has performed at different venues, including comedy clubs and colleges all over the United States, Japan, Europe, and the Middle East. Moreover, she has been the opening feature of many renowned comedians like Arsenio Hall, Jay Lenoand Iliza Schlesinger.

2. Reem Edan Is Unique in Her Ethnicity in the Comedy World

Reem Edan is a female American-Iraqi, Muslim comedian. This particular background and ethnicity aren’t shared by anyone else in the comedy world. This also makes much of her comedic material. She uses humor to shed light on the cultural and religious differences in her life and upbringing. Her profile is also a slap in the face to three different stereotypes (gender, cultural and religious), which she wants to break. She has termed her own comedy style as “Muslim-ennial” humor.

3. Reem Edan Wants to Change the Perception about the Middle East

Reem has shared how she often gets comments and emails from fans all over the world who are delighted to see such a powerful voice representing them. She is aware of how Arabs and Muslims are portrayed in the media. As a stand-up comedian, she aims to promote this as a viable career path, especially for Middle Eastern women where she feels there is a gap.

4. Reem Edan Had to Change Her Whole Career to Get into Comedy

Reem’s parents are from Iraq, while she herself was born and raised in Fort Collins. She completed her graduation in Colorado and moved to Los Angeles, where she worked in film marketing. She has worked for Paramount, STX Entertainment, and Disney.

All this changed when she finally took the brave and radical step to start being a stand-up comedian. After her first stand-up performance in June 2016, which got a huge applause, she moved on to become a comedian/writer.

Reem Edan is one of the alumni of 2020 NBC Late Night Writing Workshop and the MGM Writing program. She is a two-time scholarship recipient at the Groundlings. Furthermore, she has worked extensively with multiple brands like SWAAY Media and WhoHaHa (Elizabeth Banks). She wants to portray the stories and perspectives of females to a broader audience.

She was also named in Bustle’s “5 Muslim Women Comedians to Get You Through Social Distancing”.

6. Reem Edan Made Her TV Debut with The Standup Sketch Show

Having already made a solid name for herself in the field of stand-up, Reem Edan made her TV debut on The Standup Sketch Show in November 2021.

This new series is an original of the video-on-demand platform Shahid in Arabic. This platform is owned by MBC Group. Reem has her set in the fourth episode of the first season, which contains a total of 7 episodes.

She also appears with other comedians, including Mo Amer, a Palestinian-American Netflix comedian.

7. Reem Edan Has Worked in the Film Industry in the Middle East

As mentioned before, Reem has a lot of experience in the film industry. On one of her international tours, Reem performed with the Beirut-based Hollywood Pop Up Comedy Club in Bahrain. For her comedic pilot episode “The Degenerates,” Reem has won a 2019 Filmmatic Comedy Screenplay Award.

She has also won the second Create the Writers Room contest held every year by producing a short film, “The Ramadan Diet Kit.” This infomercial is a satirical piece on what not to eat and drink during the Islamic month of Ramadan.

8. Reem Edan I     s an Inspiring Figure of the Power of Determination

Being from a Middle Eastern background, Reem had to face a lot of challenges in her life. There aren’t as many female comedians as men, less so of this ethnicity. Her family was rather against her dropping her degree and pursuing stand-up. However, she persisted in her dream to become a stand-up comedian and has successfully achieved it.

Here is a video of a stand-up comedy performance by Reem Edan at the Irvine Improv in October 2021.

Reem Edan is breaking all sorts of stereotypes with her comedy. She is an inspiring figure for everyone, especially those who feel like they don’t belong. Her struggles and career path are a testament to how success can be achieved if one is determined enough. Reem’s humor and comedy style resonates well with almost everyone.