Zach Noe Towers – An Entertainer Through and Through! 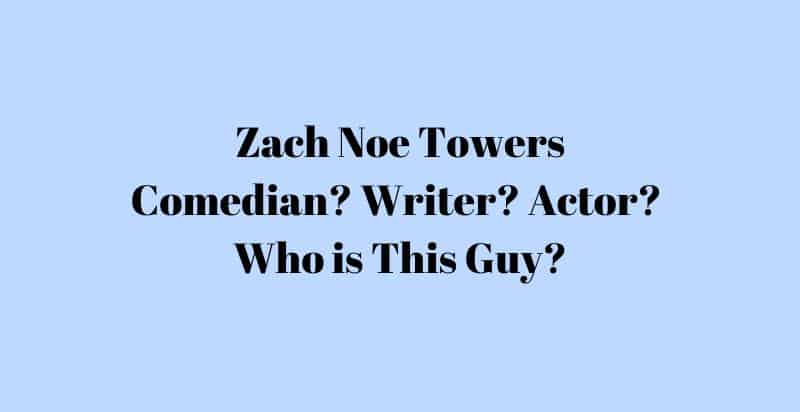 Zach Noe Towers is an American writer, comedian, and actor who also has experience directing a short film. With a long list of projects on his resume, it is safe to say that the LA-based entertainer is headed in the right direction and has big things waiting for him in the future.

His unique comedy style and knack for comedic writing have helped him climb ranks in the entertainment industry, becoming one of the most anticipated and appreciated talents today. Let’s look into some of the most laudable career achievements and facts about Zach Noe Towers.

The Elite Daily Show is an American comedy TV series and a premier daily news platform for the millennial generation, by the millennial generation. The main stars of the show include Zach Noe Towers, Gabi Conti, and Karl Hess, all of whom along with other supporting cast members indulge themselves in the daily problems, conversations, and activities of an average millennial’s life.

The show aired for the first time in 2015 and to date has released 112 episodes in 4 seasons, the last episode came out on August 29, 2017. Being a well of talent, Zach did not only star in the show, but was also one of the co-writers for the series.

2. The Hysterical Guy Was One of the New Faces for Montreal’s Just for Laughs Festival 2018

Just for Laughs is an annual comedy festival held in Montreal, Canada, each July. It is the world’s largest international comedy festival and was founded in 1983. Comedians from all over the world participate in this thrilling and hysterical, almost one week long, standup competition.

The festival also branches out as a television division with tapings and clips from the festival being featured on Just for Laughs subsidized and branded TV specials and programs. All of which have been broadcasted on channels such as Radio-Canada, CBC Television, TVA, and The Comedy Network.

In the 2018 edition of the festival, Zach Noe Towers was named as one of the new faces of the festival along with several other comedians including Rosebud Baker, Joel Boyd, Rocky Dale Davis, Kellen Erskine, Simon Gibson, Erica Rhodes, Usama Siddiquee, Nina Tarr, and Jordan Temple.

3. Zach Was Praised and Acknowledged by Time Out Magazine

Time Out is a London-originated magazine published by the Time Out Group who have now expanded their editorial reach on a global scale, 58 countries and 328 cities to be precise. The magazine is renowned for highlighting and praising up-and-coming talents including comedians, musicians, painters, etc.

In 2018, the magazine rolled out a list highlighting rising comedy talents called “2018 Comedians to Watch,” and you guessed it! Zach Noe Towers was one of the names in the list.

4. The Comedian Was Featured on Dear White People

Dear White People is an American comedy-drama TV series based around a group of black students in a predominantly white Ivy League college who try to navigate around racial and other forms of discrimination. The TV series premiered on April 28, 2017, and since then has grown to become a five-time award winning show, one that has also racked up a staggering 36 nominations.

A quite commendable achievement seeing as how the show achieved this with only 40 episodes to its name. Towers was featured in volume 3 (season 3): chapter III of the show, in 2019, where is played the role of a home decorator.

5. Towers Hosted Out on Stage

Comedy and acting aren’t the only two skills this guy has under his belt, he’s also a great writer and host as is evident from his work on Out on Stage. Out on Stage is a one-of-a-kind comedy TV series hosted and co-written by Zach Noe Towers featuring some of the top-rated standup comedians from the LGBTQ community.

These talented comedians deliver side-splitting standup performances centering around a variety of taboo and offbeat topics. The show lasted for only 6 episodes, however, premiering and concluding in the same year – 2018.

6. Zach Is Also the Writer and Star of a Short Film

Why audition for films when you can produce your own, right? Killer Friends is a short comedy film written and produced by Zach Noe Towers, who also happens to be playing one of the lead roles in the movie. This short 11-minute film follows the plot of four friends who go on a camping trip, one they won’t be coming back from alive.

The film was very well-received and even won 4 Dances With Films awards for the categories of Run of the Fest Short, Fusion Short Film, Overall Audience Award: Shorts, and Audience Award: Fusion Shorts. The short film was also screened at many film festivals, internationally and domestically.

7. The Actor/Comedian Was Also Cast for TV for Monsters

TV for Monsters is a never-before-seen TV series inspired by the classic movie monsters we’ve all grown to love and admire, ironically, more so than we’re terrified of them. The short-lived TV series involves these classic make-believe monsters (or are they?) playing lead roles in highly unusual and bizarre TV shows.

The series premiered on October 3, 2017, and lasted for only 5 episodes. Zach was featured in 4 episodes where he played the role of the mummy.

8. The Multitalented Star Has a College Degree (No! Not in Awesomeness)

The comedian-actor-writer-director has a college degree, Bachelor of Arts (B.A.) and he majored in musical theatre. He got his degree from Indiana University, Bloomington. He completed his degree in 2008. Perhaps, some credit goes to the college degree for polishing Zach’s artistry skills and helping him climb ranks in the entertainment industry.

Zach Noe Towers hates on improv comedy, reads the worst dating profile he’s ever seen and describes hooking up with a pirate.

While one may say that Zach is a new blood in the entertainment industry, he is by no means an underdog. His long list of completed projects and awards testifies to his skill and talent for comedy and acting and place him in our list of future high-rollers of the entertainment industry and showbiz. If you haven’t seen his work, we suggest you do so to understand the reason for the hype around this guy.

Pinky Patel – A TikTok Star and a Comedian?