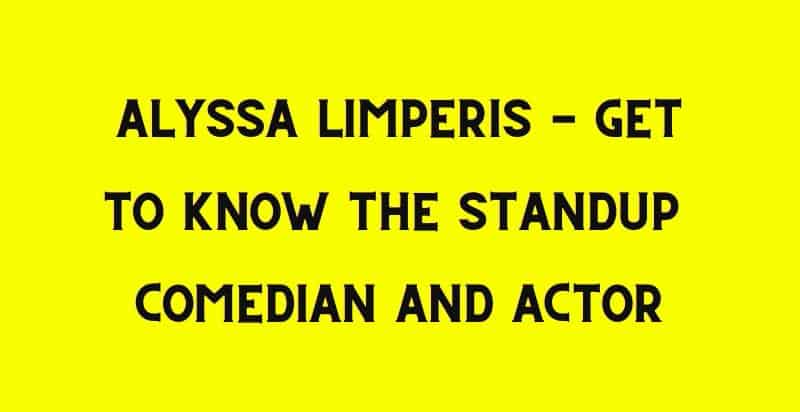 Alyssa Limperis is a comedian, writer, and actor from New York City. She currently resides in LA after having spent six years doing improv and standup in NYC. Her list of comedic accomplishments runs long, but the most prominent features are on Ellen Digital, Last Week Tonight, Conan, and Netflix’s Aunty Donna’s House.

As a talented actress, Alyssa has played lead roles in Too Late, and the indie short Brandi Finds God. She also has a few titles to her name as a supporting actor and a versatile writer. Her writings have been featured in Into the Gloss, New York Times, Reductress, and Riposte Magazine.

Her career in comedy is not something she pursues as a side gig – Alyssa has been serious about her humor craft ever since she started training at the UCB. Now, she performs all over the country, doing standup in groups and solo shows. Her most popular solo show is No Bad Days, which she has performed at many festivals. Let’s take a closer look at Alyssa Limperis’s life and see how she got to be a comedian!

1. Alyssa Impersonates Her Mom for Her Comedy Videos

Every comedian has their own style and preferences for comedic content. For Alyssa Limperis, it’s her mother, Linda Limperis. Linda is not only family to Alyssa; she is a good friend and an inspiration. Inspired by her mom’s heritage in Rhode Island, Alyssa creates her popular “mom videos,” where she mimics her mother’s accent and lifestyle to represent a certain type of mom most netizens are familiar with!

Her videos spoof her mom’s everyday life, from driving a car and using technology to visiting Alyssa’s apartment and celebrating Christmas. Her mom’s videos were the stepping stone in Alyssa’s career as a comedian. She became an internet celebrity, blowing up Twitter with her relatable videos.

On the other hand, Linda, Alyssa’s mother, is absolutely okay with her daughter making fun of her online. She even feeds Alyssa content for her videos and films them for her too!

2. Alyssa’s Father Was the Comedy Influence in Her Life

Jim Limperis was the person who inspired Alyssa to pursue a career in comedy. He was the funny one in the family, who would pull pranks on his wife, Linda, and write skits with Alyssa’s help to put on a play. He was a big fan of humor, and Alyssa got the funny gene from him.

She always knew comedy would be her thing; that’s why she moved to New York after attending La Salle Academy and Middlebury College, Vermont. Alyssa stayed in NYC for many years and grew up with other comedians like Shannon Odell.

Alyssa takes inspiration from her father’s love for comedy to create joyful content that makes her audience laugh. She uses her grief over his loss to make videos that touch hearts.

3. Alyssa Used to Work at a Financial Consulting Company

Even though comedy had always been her dream career, Alyssa needed something to pay the bills and get her through the UCB Program. There was also the thought of moving the New York because it’s either that or LA for standup comedians! Alyssa got a job at a financial consulting firm in New York, and it was overwhelming for her.

She is sure that her improv skills got her the job! Regardless, Alyssa got the chance to move to NYC and live in a city that has realized many dreams. She kept working for the firm and attending UCB classes until she became a full-time standup comedian and quit the job to embrace her comedian life completely.

Alyssa was close to her father, who inspired her to do improv and standup comedy. While she was making a career in New York, her father was diagnosed with brain cancer. He fought the battle for a year before passing away, and Alyssa and her mom were with him at the time. Alyssa was not doing her “mom videos” back then.

When she returned to New York, and her mom came to live with her, the experience inspired her split ‘mom’ persona to come out! As part of their grieving and a chance to move on from the loss of her father, Alyssa impersonated her mom on camera, and her mother filmed it.

They made her “mom videos” together and had fun creating something that helped them cope with the grief. As the videos went viral, Alyssa’s mom was proud of her daughter’s success and wished her to stay true to her passion for comedy.

5. Alyssa Played the Lead Role in an Indie Feature Film

Too Late is the comedy-horror film that left a permanent mark on Alyssa Limperis’s comedian portfolio, and it’s a positive mark! Playing the lead character of a lonely assistant who has to run away from her monster boss who eats comedians. She has a newfound love and wants to live her Happily Ever After with him, but her boss wouldn’t let her.

The movie gave Alyssa an opportunity to showcase gender bias in the comedy circle with the help of Director D.W. Thomas. Alyssa is part of the comedy industry in real life, so her frustration on-screen is not entirely from the script. She looks charismatic in her performance, portraying the role convincingly.

6. Alyssa Hosted a UCB Comedy Podcast with May Wilkerson

As a team member of the Gift, an in-house team of UCB Theater, Alyssa Limperis hosted a podcast for the network called Crazy; In Bed. She co-hosted the podcast with May Wilkerson in 2018. The podcast was hilarious and absolutely necessary for that year, according to the Dailydot.

Alyssa’s comedic timing and her wits shine brightly in the podcast alongside her co-host. This may be the best of her podcast career so far, but Alyssa has also participated in other podcasts, including Sleepyhead Podcast with Jasmine Pierce, Crying in Public, and The Fake Outrage Report.

7. No Bad Days Is Alyssa’s Tribute to Her Father

Comedy is an essential part of Alyssa’s life, so it’s not a surprise that she uses this medium to share her grief with her audience. Staying true to her comedian skills, Alyssa wrote and performed No Bad Days, directed by May Wilkerson.

She still performs it at multiple festivals across the country, and the skit is one of her best so far! Alyssa’s inspiration to write No Bad Days comes from Seinfeld, a show that is purely about comedy. It made her think about how comedy is an escape for many people and how to utilize her own talent to appreciate comedy better.

Alyssa Limperis is a comedian with strong family values and a love for her parents that shines through her performances. She writes and performs beautifully when the content is tied to her mom or dad. She is a performer with exceptional skills, and even though Alyssa has been a comedian for many years, we hope her success continues to grow with time!

Gene Pompa – A Comedian Known for More Than Comedy

Amberia Allen – A Comedian Well-Known in the Industry