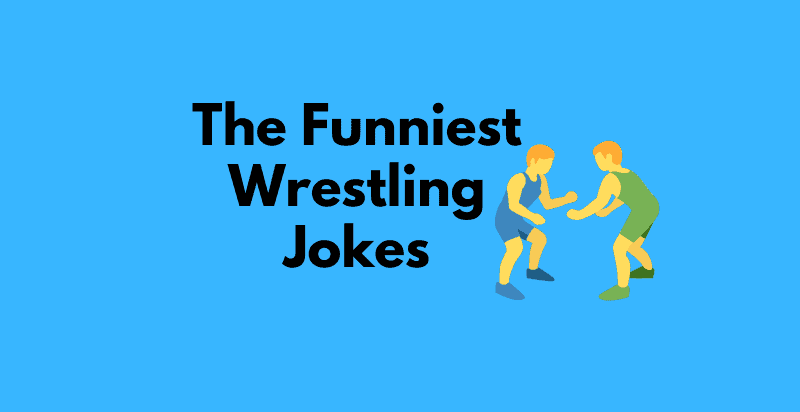 Today we present you with the funniest Wrestling jokes you have ever heard. Whether you are in gym class in school, watching olympic wrestling or just watching some WWE wrestling, everyone can appreciate the humor we share today.

The Best Wrestling Jokes Ever

The Best One Liner Wrestling Jokes

I always bring a piece of paper to a wrestling match, just in case…The Rock is my opponent.

Who decided to call it “Dwayne Johnson’s Wrestling Career” instead of…
Classic Rock?

How did the cannibal get caught at the wrestling match?
He yelled “Food fight!”

Arguing with strangers online is like wrestling sharks
Even if you win, it was a really stupid thing to do.

Two silk worms are in a wrestling match
It ended in a tie.

I just watched an entire, three day long, arm wrestling match by accident.
Turned out to be more gripping than I expected.

Wrestling is stupid.
Men without pants fight for a belt.

I just made my new wrestling name. My name is Off In Church…
Because no one beats off in church

How can you tell that Wrestling is tougher than Rodeo?
When you win at Rodeo you get a buckle but win Wrestling and they give you the whole belt!

My son walked in on me and my wife “wrestling” on the bed.
We call it “wrestling” because he can’t pronounce jiu-jitsu.

Did you watch that movie about wrestling?
I heard it was very Cenamatic.

I’m not saying I’m out of shape..but I just tried mud wrestling. And the mud won!

Have you ever seen a wrestling match? Of course not – matches come in boxes.

Why do Romans hate wrestlers? Because the Rock beats Caesars.

How do wrestlers drink their coffee? STONE COLD (Steve Austin)

What is a wrestler’s favorite vegetable? An artichoke.

You Watch WAY TOO MUCH Wrestling When…….

Our story begins at the Olympics, specifically the wrestling event. It is narrowed down to the Russian or the American for the gold medal.
Before the final match, the American wrestler’s trainer came to him and said,

“Now don’t forget all the research we’ve done on this Russian. He’s never lost a match because of this “pretzel” hold he has. Whatever you do, don’t let him get you in this hold! If he does, you’re finished!” The wrestler nodded in agreement.

Now, to the match: The American and the Russian circled each other several times looking for an opening. All of a sudden the Russian lunged forward, grabbing the American and wrapping him up in the dreaded pretzel hold!
A sigh of disappointment went up from the crowd, and the trainer buried his face in his hands for he knew all was lost. He couldn’t watch the ending.

Suddenly there was a scream, a cheer from the crowd, and the trainer raised his eye just in time to see the Russian flying up in the air. The Russian’s back hit the mat with a thud, and the American weakly collapsed on top of him, getting the pin and winning the match.

The trainer was astounded! When he finally got the American wrestler alone, he asks, “How did you ever get out of that hold? No one has ever done it before!”

The wrestler answered, “Well, I was ready to give up when he got me in that hold, but at the last moment, I opened my eyes and saw this pair of balls right in front of my face. I thought I had nothing to lose, so with my last ounce of strength I stretched out my neck and bit those babies just as hard as I could.

“So!” the trainer exclaimed, “that finished him off did it?”
“No, but you’d be amazed how strong you get when you bite your own balls!”

Related: The best jokes about soccer