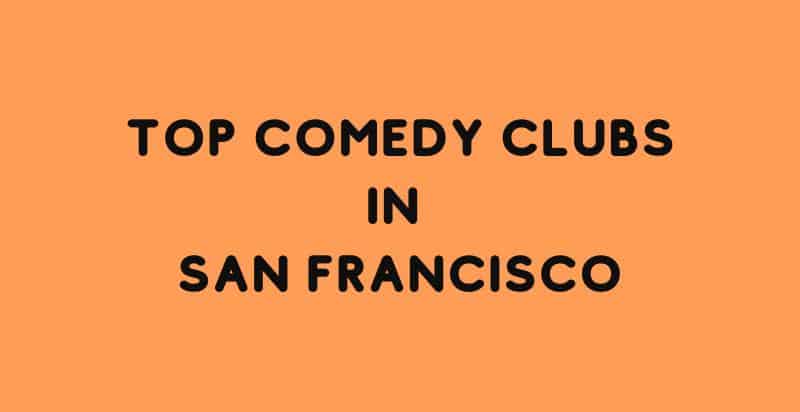 The comedy scene in San Francisco is just as diverse as the neighborhoods and people of the city. In San Francisco, you will find comedians from different cultural backgrounds sharing their unique experiences in various comedic styles. From hilarious improv performances to side-splitting monologues, comedians in San Francisco are experts in making audiences laugh with their talent.

The humor of San Francisco comics is quite laid back, and you will be able to notice a self-deprecating quirkiness in every performance. This quirkiness makes the jokes more relatable and enjoyable for audiences; they can easily connect them with their life experiences.

San Francisco is a big city that hosts a variety of stand-up and improv comedy shows every night. With a plethora of options available, newcomers to the city often get overwhelmed by choices and decide to choose a comedy club at random. To help you select the best comedy club for an unforgettable experience, we have curated a list of some of the best comedy clubs in San Francisco.

Here Are Some of the Best Comedy Clubs in SF

Punch Line Comedy Club San Francisco is one of the most popular comedy clubs in the city. The comedy club offers polished comedy that caters to various audiences with preferences towards different styles and topics for comedy. It is the oldest comedy club in the city and hosts some of the biggest names in comedy when they visit San Francisco. You will always see a line waiting to enter the Punch Line Comedy Club since many classic comedians such as Dave Chapelle, Robin Williams, Jerry Seinfeld, and Margaret Cho have performed here. There are six shows every week and a local showcase, so visiting the Punch Line Comedy Club for a dose of great laughs is a safe bet.

Aside from Punch Line SF, Cobb’s Comedy Club is a famous venue in the city a national headliner is bound to consider for their San Francisco leg of the national tour. It has the capacity to house 400 people and is perfect for touring comedians. With a two-drink minimum, we believe watching an unforgettable comedic performance at Cobb’s Comedy Club is a steal. You can also attend acts by local comics who have proven their mettle and are looking to attract new audiences to join their fanbase. Some famous comedians who have performed at Cobb’s include Dave Attell, Dana Carvey, Dave Chapelle, and Robin Williams.

Cheaper Than Therapy is one of the most convenient and best comedy clubs you can visit in San Francisco. It is situated at the historic Shelton Theater and is located in the center of the city near Union Square. It is a highly recommended spot for date night since you don’t have to break the bank to score some tickets. The comics from the shows often engage with the audience and mix a little bit of improv with their set. Shows for Cheaper Than Therapy last around an hour and a half as multiple comics present their best material for 15 to 20 minutes each. Since Cheaper Than Therapy offers impressive comedic performances at great prices, tickets often get sold out within a few days. Therefore, getting your tickets in advance is best if you want to catch a Cheaper Than Therapy show without the hassle.

Milk Bar is more than just a comedy club at the top of Haight Street. Many people understand that it is a place that presents high-concept and bizarre comedy to the audience. However, Milk Bar offers a comedic experience that is unlike any other you might have experienced since it can make the most somber of your friends giggle out loud. Jury Duty is a show that takes place at Milk Bar every Monday, which features various comedians arguing against pointless cases with improv comedy. Milkin’ It is also a must-watch comedy show at Milk Bar that you can catch on the second and third Tuesday of every month.

Doc’s Lab is a venue in San Francisco that does not do comedy exclusively, but they have exceptionally great comedic shows lined up for audiences. It is not an ample space that can seat hundreds of people, but it is a basement with a relaxed ambiance where you can chill easily with your friends. You can catch some of the best up-and-coming comedians at Doc’s Lab, as well as big-shot national comedians that sometimes frequent the small setting. You can check out their schedule to see if they have a talented and well-known comedian lined up to perform at the venue or visit Doc’s Lab on Monday to enjoy a free show.

PianoFight is the best place to go if you want to enjoy a diverse night of comedy with your date or friends. You are guaranteed to catch an excellent performance whenever you decide to visit PianoFight since it presents all kinds of comedic sets, including improv and sketch comedy, as well as artistic acts for drama and music. PianoFight also features a live jazz bar and two different theater spaces with a laid-back vibe, making it the perfect spot for a fun date night idea. Local comedy stars such as Steve Post, Allison Mick, Torio Van Grol, and Matt Lieb often perform at the venue for different audiences.

Which are the best comedy clubs in San Francisco for couples?

Cheaper Than Therapy, Doc’s Lab, and Cobb’s Comedy Club are the best places for couples to enjoy stand-up comedy in San Francisco.

What is the best comedy club in San Francisco?

There isn’t just one comedy club in San Francisco that is better than the rest, but there are several comedy clubs known to highlight talented new comedians and showcase incredible performances by veteran comics. The best comedy clubs in San Francisco are Cheaper Than Therapy, Cobb’s Comedy Club, The Punch Line, Doc’s Lab, and more.

Which comedians got their start in San Francisco?

Margaret Cho, Ali Wong, Dana Carvey, and Robin Williams are some of the most popular comedians who got their start in San Francisco.

San Francisco is a lively city with a prominent comedy scene. National headliners such as Dave Chapelle, Robin Williams, Ali Wong, and more are known comedians from the city who have made a name for themselves for their witty and slightly self-deprecating comedy. There are a variety of comedy shows every night in the Bay Area as people like to go out and enjoy each other’s company after work hours. Aside from comedy clubs in San Francisco, there are also popular comedy shows that have been delivering fantastic performances for years. If you are in San Francisco, you must check out some of the places mentioned in the list above for a fun night full of laughter.

For information about the best comedy clubs in other notable cities, click on any of the links below.

The Best Comedy Clubs in Minneapolis

Best Comedy Clubs from Boston You Must Visit