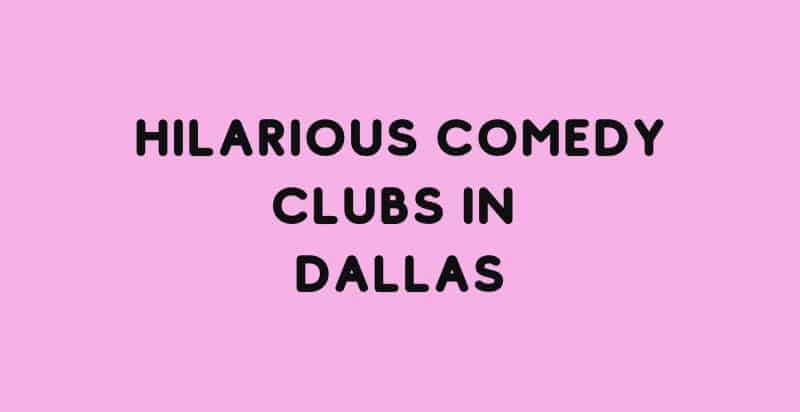 Many people think the comedy scene in Dallas is boring or slow. What they don’t know is that it’s just underrated and slowly flourishing with talented up-and-coming comedians. Dallas has an active comedy scene that includes stand-up performances, improv troupes, great open mics, and fantastic comedy clubs. When you visit a comedy club in Dallas yourself, you can see the potential of the comics and how quickly they can make audiences snort with laughter. If you are interested in becoming a comedian yourself, you can visit comedy clubs for classes to improve your skills (improv or stand-up) or watch memorable performances to see how you can learn from experienced comics.

To help you find the best spots for watching comedy in the city, we have listed some of the most popular and highly-rated comedy clubs in Dallas.

Here Are Some of the Best Comedy Clubs in Dallas

Backdoor Comedy Club is one of the most popular places to watch stand-up comedy. The club has a cozy ambiance and puts up shows every Friday and Saturday night for audiences. Thursday nights are open-mic nights where up-and-coming aspiring comedians can sign-up to take the stage and entertain audiences with their sets. The club is famous for putting talented comics on the map as it only selects quality acts for its stage. Audiences can expect famous national comedians, local favorites, and newbies who want to impress audiences at the Backdoor Comedy Club. The cozy lounge of the comedy club also offers a bar where you can order delicious drinks to enjoy various performances.

Audiences can catch sketch, improv, and stand-up shows five nights a week and sign-up for different comedy classes at the Dallas Comedy Club’s training center. The best feature of Dallas Comedy Club is that it has something for everybody. You can watch long-form improv performances as well as hilarious storytelling acts that will have you laughing uncontrollably. While most of the performers are the faculty and students of the Dallas Comedy Club, a few famous performers have also graced its stage.

Many people mistake Hyena’s Comedy Club as a simple and small comedy bar; however, you can expect some powerful performances at this cozy comedy club. It has become so popular that it has opened three locations (Plano, Dallas, and Fort Worth) in the DFW region. You will always notice a line to enter the club on Friday and Saturday nights as many local headliners, such as Dustin Ybarra and Pauly Shore, are known to give superb performances around the weekend.

Local talented comedians also perform their sets at the Hyena’s Comedy Club and make sure that audiences enjoy themselves to the fullest. Performers you can expect at the Hyena’s Comedy Club include Kurt Metzger, Jeff Dye, and Phil Hanley. You can reserve a space on Thursday evenings if you want to watch a free show, with only a two-drink minimum.

The Arlington Improv is a comedy theater and restaurant that was established in the 1960s. Audiences can watch incredible stand-up performances and improv acts from Wednesdays through Sundays. Open Mic Hours on Tuesdays also attract a good crowd as people look forward to checking out new talented comedians in the city. Most people frequently visit the Arlington Improv since it offers a great show and serves delicious food. You can order from a full dining menu during the show or go for some queso and chips instead. At Arlington Improv, you can expect to see talented comedians like JJ Williamson, Tony Rock, Paul Rodriguez, and more. You can check the club’s website for which comedians are performing at the club and purchase tickets online.

Four Day Weekend is a considerably newer comedy theater in Dallas that offers audiences weekly improv shows. These improv shows are a cut above the typical ones you might have watched at other comedy clubs. The special thing about these improv shows is how they are created with audience participation and their suggestions. The comedy group that performs these shows has been recognized by critics as they perform in different locations in the Southwest. Each performance is about an hour or forty-five minutes long, where people laugh their hearts out with other comedy fans. The cast of the Four Day Weekend includes David Ahearn, David Wilk, Troy Grant, Frank Ford, and some other local comedians. Aspiring comics can also register for classes at Four Day Weekend for sketch writing and improv performances.

The Addison Improv is famous all over Dallas for hosting some of the biggest comedians and amazing improv performances. The club is situated across from Pete’s Dueling Piano Bar on the second floor of the building. With a full restaurant and bar, this club is perfect for visiting with friends or your significant other for a fun night out. The price of the tickets is affordable but varies according to the performer at the club. Some of the performers you can expect to catch at Addison Improv include Aries Spears, Dustin Nickerson, and Dan Soder.

What are the top-rated comedy clubs in Dallas?

Who are some of the most prominent comedians from Dallas, TX?

Cristela Alonzo, Tone Bell, Dustin Ybarra, Nick Guerra, Jerry Rocha, and Mark Agee are some of the most popular comedians from Dallas, TX. Some of these comedians have even performed on famous TV shows.

What are the oldest comedy shows in Dallas?

The Backdoor Comedy and Arlington Improv are the oldest and longest-standing showcases in Dallas, TX. It is an adults-only comedy club that hosts some of the best comedians in the city.

Although the comedy scene of Dallas might not be as expansive or diverse as New York City’s, the city has its own unique comedy scene that is loved by locals. You can see many audience members supporting local comedians on the weekends, no matter if they are newbies or experienced veteran comics. Dallas also hosts several national headliners sometimes, which is why you should keep your eyes open for any news of popular comedy shows in your locality. You can take your date or friends to any of the locations mentioned above for a fun night out where you can laugh heartily and enjoy some delicious cocktails and food.

Most Hilarious Comedy Clubs in Cincinnati