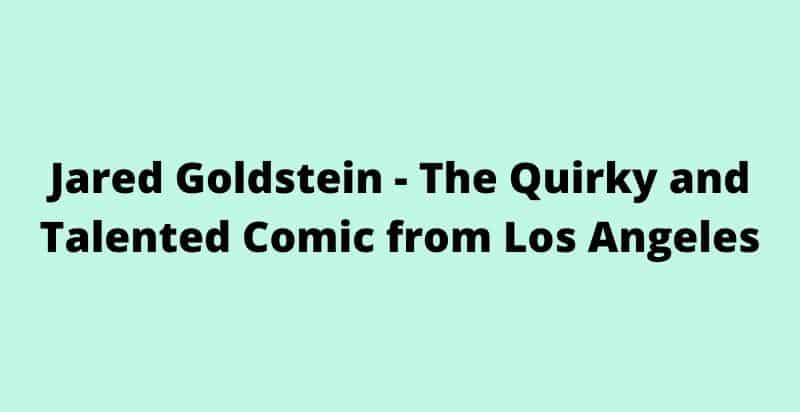 Jared Goldstein is a comedian, writer, and actor based in Los Angeles. He is also proud of his identity as a Japanese, Jewish, gay comic, and often makes fun of his different experiences due to it. Jared is best known for acting on the shows The Unicorn, Nikki Fre$h, and Modern Family.

Jared is a multi-talented comedian who is comparatively much younger than other comics presently in the industry. He is also part of the millennial generation, making him much more relevant and relatable.

Jared’s career in comedy was highly successful during the pandemic when audiences were quarantined in their homes and needed a moment of laughter to enjoy the chaos. He rose to popularity in 2019 when he was stated as one of Time Out’s LA’s Comics to Watch for the following year.

His acting credits have only put him on the map to greater success as he gained much exposure due to them. Although Jared Goldstein is originally from New York, he lives on the West Coast in LA. His unique and witty comedy has allowed him to make a name for himself in the stand-up circuit and even collaborate with huge bands like 5SOS for comedy sketches.

If you want to learn more about Jared Goldstein and his comedy career, keep on reading this article for more fun information about him.

Here Are Some of the Quirkiest Facts about Jared Goldstein

1. Jared Goldstein interviewed the world-famous 5SOS with a hilarious sketch

Jared was offered a chance to interview the world-famous Australian pop band, 5SOS. When Jared learned he would be interviewing the four-membered band, he knew he wanted to do a comedy sketch inspired by Martin Short’s character Jiminy Glick.

Jared loves Jiminy Glick for his outrageous hilarity and wanted to write something similar for the comedy sketch with 5SOS. 5SOS was extremely supportive of him and entirely trusted him with the comedy sketch. They even suggested a few ideas to improve the sketch, and Jared loved their input. Jared gained quite a lot of exposure from the interview because the 5SOS fans loved it.

2. Jared has been named one of Vulture’s “Comedians You Should, and Will Know in 2021”

Owing to his hilarious character and acting skills in Nicole Richie’s underrated show Nikki Fre$h, Jared was named as one of Vulture’s “Comedians You Should and Will Know in 2021.”.

Jared plays a deadpan, satirical personal assistant to Richie in the show and showcases his excellent acting skills with physical comedy as well. His true style of comedy can also be seen on the show as he flirts with Joel Madden and dons fun costumes. V

ulture described his comedy as highly addable and his key demographic to be an intersection between “queer, Jewish, Asian, and cutie”. He was also predicted to be a part of a great rom-com in 2022 by Vulture, where he would steal the hearts of the audiences with his charming humor.

3. He has great stage presence that his audience admires greatly

Jared Goldstein has an entertaining and impressionable stage presence admired by all kinds of audiences who come to his show. He comes across as sarcastically all-knowing without seeming mean.

His material is intelligently written since his sense of stand-up comedy has been inspired by the greats. Whether he performs a set at a gay bar, a college, or a comedy club, audiences can see an honest and unique part of Jared’s personality in the performance clearly.

He makes sure to interact with each audience member if he is doing an online show and looks into the audience’s eyes when he is delivering jokes on stage. He believes that making the audience feel included is an integral part of stand-up comedy.

4. Jared’s comedy material is varied and can never bore an audience

The best thing about Jared’s comedy is that it can never bore a person. His comedy material is varied and talks about his funny and close relationship with his mother, his undying and brave love for malls, and his fun experiences and observations as a gay man.

His Twitter feed is hilarious, and he has amassed over 15 K followers on the platform owing to his sassy sense of humor. Jared can usually be found roasting (nicely) different people or himself and making his audiences laugh at his unique observations.

5. Jared has appeared on SNL

Many people who come to his comedy shows are unaware of the fact that Jared had once appeared on the show Saturday Night Live (SNL). Jared has sung in a Saturday Night Live comedy sketch. The hilarious sketch was written by Tina Fey and featured Jimmy Fallon as the star.

Liz Miele – Up and Coming Comedian from New Jersey

6. Jared Goldstein didn’t want to be a stand-up comedian

Jared Goldstein didn’t want to be a stand-up comedian in the beginning when he was growing up. However, he liked many comedians but never felt like a comedian to begin a career in comedy. He used to do singing and theater in his teenage years, which seemed like his identity.

But when it didn’t work out, Jared decided to give comedy a shot. He wanted to join a graduate school to complete a degree in occupational therapy, but his credits had expired. Jared had planned to give stand-up comedy a chance before enrolling in beauty school if that didn’t go well for him.

7. Jared finds comedy to be a way to express himself confidently

Jared believes that performing stand-up comedy on different stages has given him a chance to express himself confidently and be taken seriously as a comic and a person. Comedy allowed him to take charge of the narrative and create a conversation about anything bad or serious that needed to be addressed.

Jared felt like he was constantly laughed at and undercut when he was young. However, he decided to take power in the knowledge that life deprecates everyone and took control of how he views and expresses his opinions.

8. Jared regularly performs at some of the most popular comedy clubs

Jared has performed at several different comedy clubs and comedy shows. He has performed at the Laugh Factory, The Eagle, The Yard, Improv Lab, Comedy Manor, Giggle Gaggle, and many other popular venues.

He has also performed for Comedy Central, where he had an eight-minute comedy set talking about his experiences as a gay man and how sports and car mileage did not make sense to him.

When Straight Guys Apologize for Being Straight – Jared Goldstein

Jared Goldstein is one of the rising stars of comedy and was predicted to become a well-known comedian in 2022 by Vulture. Although Jared did not plan on becoming a stand-up comedian initially, he began enjoying the stage after a few months he started stand-up and how his audience reacted to his jokes.

He is an amazing comedian with a natural witty and sassy style of comedy that makes the audience giggle and laugh out loud. His comedic material consists of jokes about his mother, his experiences as a gay man, and his hate for sports.

Jared Goldstein is an amazing young comedian who is guaranteed to make anyone laugh with his funny tweets and clever humor. If you want to read more about comedians like Jared, click on any of the following links.