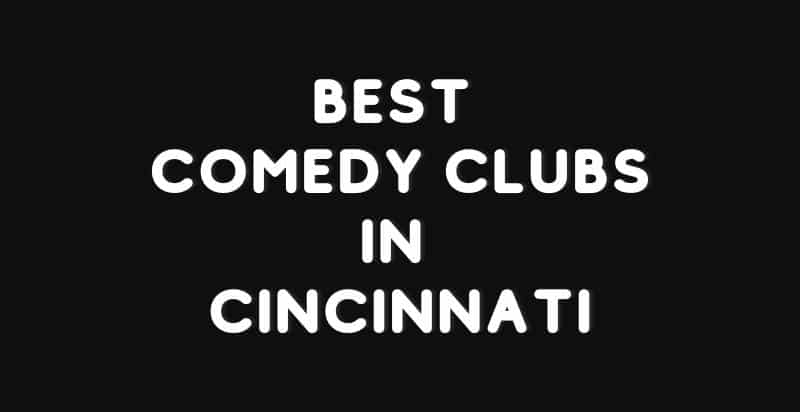 No one needs a reason to visit a comedy club and have a few laughs while enjoying a drink or two. It’s a simple way to escape the stress of life. Laughing at silly jokes about funny things in life and watching your favorite comedians up close is an experience to remember. When you’re in need of a laugh or two, visit one of these places in Cincinnati, OH!

Go Bananas is a must-visit spot in Cincinnati as it’s one of the best standup comedy clubs in the state. Since it opened more than 30 years ago, Go Bananas has hosted many shows with famous comedians, including Ron White, Joe Rogan, Daniel Tosh, Dave Chappelle, Jim Gaffigan, Lisa Lampanelli, and Doug Stanhope.

The comedy club runs regular shows from Wednesday to Sunday, with Wednesday night reserved for Pro-Ams. Up-and-coming comedians get featured one day of the week and get to impress the audience with new stuff. Rest of the nights, you will find a mix of kid-friendly and R-rated shows. Make sure to check the rating of each show before booking the tickets for your kids below 18.

Go Bananas also has a great menu, from pizza and mozzarella sticks to chicken tenders and brownies. The drinks list is as versatile as food options–you can order anything from wine and beer to chocolate milkshakes.

The Cincinnati chapter of Improv is located at the Clifton Comedy Theater, where experts have the best classes and workshops for team building and fun. It’s one of the best comedy clubs for high-quality improv performances. The interested individuals participate to improve their standup skills and entertain audiences.

Their most popular showcases are Helltown, The FOMO Show, and Grottofest. Helltown is a Saturday night showcase that happens at The Comet in Cincinnati. The show features some of the best headliners including Simon Fraser, Mike Gamms-Green, Kyle Kemper, and John Hays. The FOMO Show is an all-female showcase that happens twice a week. Grottofest is a showcase celebrating performers such as Joe Pettis, Alyx Libby, Josh Faust, Gretchen Schultz, and Dennis Piper.

If you want to indulge in some interactive comedy, The Dinner Detective is the right comedy show for you. The theater is located across the state border of Covington, Kentucky. The hilarious murder mystery dinner show serves a great meal and loud laughs. The comedic experience is not reserved for a room full of strangers.

If you do not want to interact with others at a scheduled event, you can book a private event and have your guests join you for dinner and a fun night. The place keeps its website updated about the latest shows and performances. You should visit the website to check for available tickets and book yours if you are ready for a murder party! If you can’t pre-order tickets, you can join their waitlist and hope a guest cancels.

Bogart’s is a concert venue in Cincinnati that hosts comedy shows throughout the year. It’s not exactly a comedy club that you can join for training or visit for regular standup shows. However, the venue has been hosting live comedy podcasts on stage along with standup acts, so it’s definitely worth being part of this list!

The Best Places to Watch Live Comedy in Boston

Located across from the University of Cincinnati, Bogart’s has been entertaining audiences for over 40 years. Billy Crystal is one of the stars who have graced the stage of Bogart’s. The only problem with this venue is that you have to check the schedule a few months before to ensure there are tickets to reserve. The website keeps the online schedule updated, so there shouldn’t be a problem if you want to go visit in a few weeks or months.

Funny Bone is a comedy club chain, but the closest one for residents of Cincinnati is the Liberty location. The original Funny Bone is from Pittsburg, Pennsylvania, but since its expansion, each location is unique with local and national comedians gracing the stage.

Taft Theatre opened in 1928 and has been a permanent mention in the cultural history of Cincinnati. It’s one of the best places for standup comedy shows, and given the extent of the venue, comedians and troupes come from all over to showcase their talent. If you are lucky, you can see the likes of Bill Maher and Jeanne Robertson perform on the stage.

The theater features adult performances that are not recommended for families and kids. If you want to enjoy a fun event with friends, this will be more up your alley. You can check Taft Theatre’s website to look for upcoming available shows.

Andrew Rudick is featuring for Chad Daniels at Go Bananas Comedy Club on 1/7/22.

These are the best comedy clubs in and around Cincinnati. Next time you want to plan something fun for your friends, girlfriend, or partner, now you know where to go! All of these places guarantee a memorable time and a healthy dose of laughter that may or may not make you snort a little.

Some of the highly rated comedy clubs in Cincinnati are Go Bananas Comedy Club, Improv Cincinnati, and Bombs Away! Comedy. Taft Theatre and Bogart’s are venues that organize many comedy shows every year.

You can visit a bar in the neighborhood or catch a show at one of the best Cincinnati comedy clubs. Go Bananas Comedy Club is open for shows on Mondays.

Go Bananas Comedy Club, Funny Bone Comedy Club – Liberty, and The Dinner Detective have the most reviews from people who’ve attended the comedy shows there. These places have reviews better than any other comedy club in and around Cincinnati.