Kelsie Huff – Getting to Know An Upcoming Comedian 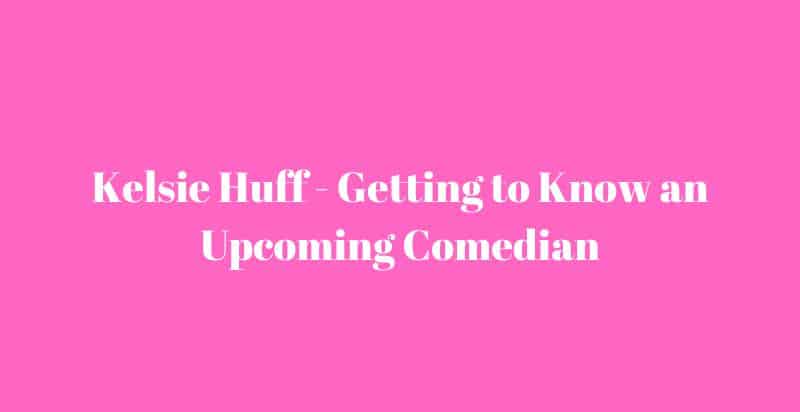 Storyteller, truth-bomber or a stand-up comedian? While several stand-up comedians take the stage to make the audience they’re talking to smile, they often take on different roles, making their skill captivating and fun to watch. Kelsie Huff is one of those storytellers turned comedians. While comics are often credited for cracking hilarious jokes, it’s merely their distinct perspective of life that helps them stand apart. A stand-up routine from Kelsie is no different. Read on as we take you through some of the best Kelsie Huff facts you’ll find!

For Kelsie, the journey into the comedic lifestyle started from Chicago when she started performing at different venues, such as Mayne Stage, Chicago’s Laugh Factory, Zanies, and several other areas across the Chicago suburbs. She became popular quickly amongst the Chicago underground scene because of her “infectious” and “joyous” humor. It made people feel alive and happy because of the loud, lovable, and ironically unbearable characters she created for her shows.

2. People Call Her a Cultural Treasure

Kelsie’s fans often describe her as a Midwest cultural gift since she can transport her audience from a dark comedy club to a fun slumber party. This is also one of the reasons why Kelsi has managed to gain a following in a short amount of time. Unlike other stand-up comedians who often take on the cynical approach, Kelsie has a bright, fun-loving method.

3. Kelsie Wrote and Produced Her Show (And It Was Super Successful)

Kelsie has also been credited for creating a one-woman show which explored the theme of struggling to find the quality of forgiveness in a haphazard and chaotic family tree. Audiences loved the show, and Boulder’s Daily Camera gave the show a 4 out of 4 rating. Time Out Chicago stated that the show is a “Don’t Miss” and won the Encore Award at the Boulder Fringe Festival. Moreover, Kelsie also won the Camera Eye Award as the Best Actress (Comedy).

P.S: She wrote another show called the “Bruiser: Tales from a Traumatized Boy”, which got 4 out of 4 stars from Chicago Stage Review. It also got her the Best Solo Performance award.

In a recent interview with Chicago, Now Kelsie stated that even though she can make other people smile, it is rooted in sadness. She revealed that she grew up in domestically violent circumstances where women were told their lives didn’t matter. She had a father who was always drunk, and she had to seek therapy to unlearn many of the things she had learned when she was a child.

For her, her humor was a coping mechanism. She believes people can be made to feel valued by making them feel powerful while listening to them carefully. Her perspective of stand-up comedy is inherently different from several other comedians. For her, laughter is her way of connecting with people. She feels she’s a part of the audience she entertains, which is why she enjoys her shows as much as the people who come to watch her.

Well, isn’t that a given? People call him one of the greatest comedians to grace the stage, and it’s no surprise a great comedian is influenced by another! Kelsie often casually mentions seeing a subpar bootleg video of Richard Pryor on a T.V. while in a coffee shop. In that video, Mr Pryor was pretending to be one of his infamous characters, and he was so indulged in his performance that he started crying.

By watching Richard captivate the audience merely by the power of empathy, Kelsie soon started to take notes.

6. Kelsie Realized Her Skill Through Reading

Kelsie often reminisces the time when she learned how to read. As soon as she could decipher what a collection of alphabets meant, she would often hide during recess or climb on trees to find solace in her world full of literature. She has always thought her books were better company than her friends at that time, and this was when a few things started to change.

She recalls that in a parent-teacher meeting, one of her teachers said that she had to be more social, and this was when Kelsie actively started working on this trait. When she started talking, she realized that she could instantly turn negative and tense situations into moments of joy through her ability to make people laugh. It was a healthy way to contribute, so she picked up the habit.

As sad as it may be, we visited Kelsie’s website, and as of now, Kelsie is not performing anywhere since she’s taking the COVID-19 pandemic seriously. However, if you still want to catch a whiff of her style, you can watch several of her shows or her stand-up specials!

At the StoryStudio in Chicago, Kelsie is also an instructor where she teaches a six-week course on comedy. Kelsie likes to describe her course as an experience where students mine their memories for comedy. Inherently, as Kelsie likes to describe it, a stand-up comedian makes people laugh because of their entertaining perspective of life because, by and large, we all lead the same lives.

In her class, she focuses on strengthening their perspective, helps them build character while also contributing to their comedic pieces. Her students also have to submit written assignments to get feedback and tips from Kelsie on their style.

9. She Learns A Lot from the People Around Her

In a show called The Jam, Kelsie stated that she has the magical ability to connect with people almost instantly. She stated that this happens because of her habit of meditation. She believes that curiosity and a blank state of mind are essential if one wants to succeed in the world of comedy. Kelsie has always listened genuinely, so people give her raw, uncut and genuine answers, which she can then turn into funny stories (with their consent).

Kelsie Huff talks about How Women have progressed in Comedy

Kelsie Huff is one of Chicago’s hottest comedians. She has studied at iO Chicago and Second City, and she teaches the popular Feminine Comique, a stand-up class geared towards women. Jimmy talked to her at this year’s Chicago Women’s Funny Festival about how she uses improv in her stand-up, how to make the transition from storytelling to stand up, and how she has been able to transform pain into comedy.

Other up and coming comedians you may want to read about:

Get Ready to Laugh with Paul Farahvar