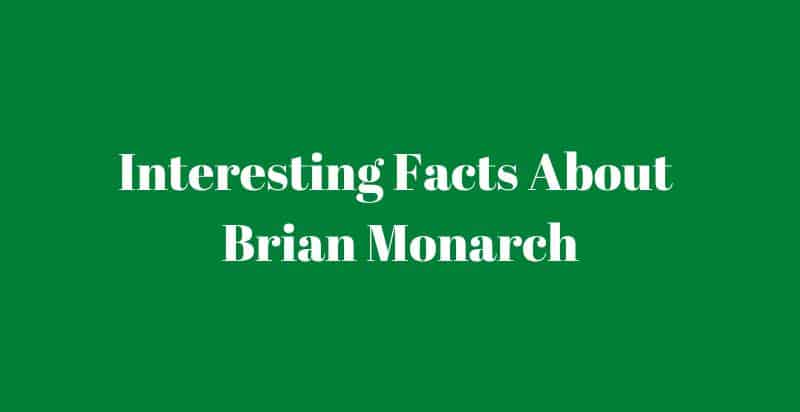 Brian Monarch is a popular American stand-up comedian known for his in-your-face bold jokes that have TV and live audiences laughing hard. Brian is known for his style of making witty observational jokes and has a unique style of comedy.

Brian’s comedic routines encompass a variety of themes such as religion, dating, and his age, which is his most popular one to this day. Brian has appeared on several television channels, such as Comedy Central and Fox. Not only that, but Brian’s hilariously snarky comedy has also had him featured on Hulu.

When Brian makes audiences laugh on TV, he is busy entertaining the crowds at Los Angeles’ most famous comedy clubs. He has done shows with several great comedians such as Margaret Cho, Louis CK, Bill Burr, Joe Rogan, and Chris D’Elia. If you want to learn more about Brian Monarch’s comedy, life, talents, and more, then keep reading this article for further Brian Monarch facts.

1. Brian Monarch has quite a few hilarious weed stories

In a fun  podcast with Craig Conant, Brian shared that he had never done drugs before the age of thirty. Brian only smoked weed for the first time when he was thirty and was urged by his then-girlfriend.

He recalls the incident fondly and thinks it to be a hilarious memory as he was watching a movie with his girlfriend and just said the word ‘Dove pads’, referring to her makeup cleaning pads, randomly. Brian has also tried other drugs but prefers to take them in moderation.

2. The highly popular comedian jokes about his young looks alot

Brian was born around the late 1960s or early 1970s. Although he looks younger than his actual age, Brian has been in the comedy scene for a long time. Brian has also joked about how his age does not show in his comedy shows.

He usually dates women in their twenties, and they fail to recognize his real age when they first meet them. Brian jokes that women usually realize to ask him his age much later and get surprised that he is much older than them.

Brian was born Jewish in the Valley in Los Angeles. Brian often uses dark humor to talk about Jewish stereotypes, which some of his audiences find relatable while some find it uncomfortable.

He jokes about how he does not like the ‘religious’ Jewish dating apps but instead prefers the ‘free’ ones. He has also joked about the stereotype of Jews being too greedy.

He has done shows on Sunset Boulevard and many other places. Not only that, but Brian can also be found performing on the biggest stages and shows such as The Hollywood Improv, the American Comedy Company, in Hollywood with his hilarious comedy routines.

Brian is a veteran comic who has been making audiences constantly laugh with his witty and dark humor. He has built a great network of comedians over the years and has performed with the likes of Craig Conant, Bobby Lee, Michael Rapaport, Whitney Cummings, Kate Quigley, and so many more.

He began polishing his career performing at the Laugh Factory and Comedy Store. Brian has also performed with legends like Craig Robinson, David Spade, Nick Kroll, and Dane Cook.

6. Brian took a year off from the comedy scene

In the Community Service podcast hosted by Craig Conant, Brian said that he took a whole year off from doing comedy.

He continued to be active during that time on his social media accounts, where he encouraged his followers with hilarious, dubbed deep fakes of famous movies and scenes.

Brain is a great fan of creating deep fakes of his closest comedian friends, such as Bobby Lee, Andrew Santino, and Theo Von. He superimposes their faces on famous movie scenes or in old hilarious viral videos to make his audiences laugh.

Brian has a YouTube channel by his own name and an Instagram page where he posts these humorous snippets for all to enjoy.

Brian has also gotten his amazing deepfake video featuring Michael Bublé as Elvis Presley retweeted by the singing legend himself. Michael Bublé commented humorously that it would probably be the closest he could get to becoming his inspiration, Elvis Presley.

8. Brian Monarch has had made some controversial jokes

Brian has a dark sense of humor that attracts audiences from all over the city to come to his shows, but he can also make jokes that audiences find too controversial.

He has made jokes about Jeffrey Epstein, a sex offender who committed suicide, but some members of his audience groaned and have found them to be in bad taste. He admitted to believing that his audience members would not mind as much due to Epstein’s delinquent reputation.

9. Brian is interested in Cryptocurrencies and has made a funny deepfake about it

Brian is very interested in investing in cryptocurrencies and keeps up to date with the latest news in the industry. The LA-based comedian has tweeted several times about different currencies and has shown enthusiasm when they fluctuate high on the charts.

He has also criticized Elon Musk for his sudden change against using the Bitcoin cryptocurrency as a form of transaction and supported XRP as the standard instead.

10. Brian has a hilarious story about crying multiple times at Disneyland

Brian Monarch told the story of how he tried mushrooms for the first time when he visited Disneyland with his girlfriend. He recalled he could not find any person there who looked normal but struggled to determine if it was because of the drug influence or it was the reality.

He also recalled crying multiple times throughout his Disneyland trip, especially when he saw Woody, from the Toy Story, being kind to a handicapped child. Brian has a mentally handicapped brother whom he adores.

Brian started doing comedy in 1998. He started his career at the Laugh Factory, where he went on stage and said a Godzilla joke with no premise. He had written his jokes much earlier when the Godzilla movie had just come out but delayed going into comedy which is why the audiences could not understand or relate to the joke at all, at the time.

Brian recalls the comedy set as a joke saying that he could only hear the cars driving by (silence) after he delivered the joke.

Brian tried out comedy at the Laugh Factory after being inspired by the book by Judy Carter called Stand-up Comedy: The Book. He refused to follow the book’s advice to try doing stand-up in a coffee house for the first time but instead went directly to a comedy club. Brian has also done open mics at the start of his career.

Brian has recently finished working with Dane Cook on a comedy tour. He was featured in the tour called Tell It Like It Is Tour.

What is Brian Monarch’s age?

Has Brian Monarch always been a comedian?

A Little Stand Up – Brian Monarch

Brian Monarch is a popular American comedian who has been in the comic scene for almost twenty years. Brian is based in Los Angeles and began his comedic career at the Laugh Factory in 1998 with a Godzilla joke. People from far and wide come to his shows to watch his dark comedy routines, where he interacts with his audiences and makes them laugh with his witty and snarky jokes.

Brian mostly focuses on poking fun at the different stereotypes in the society with jokes that catch his audiences unaware. Brian is also very active on social media, where he regularly posts deep fake videos and promotional content for his shows. His deep fake videos usually feature his friends and close colleagues. Some of Brian’s deep fake videos have gone viral, getting him praise from fans and stars alike.

Related Articles about Up and Coming Comedians

Rhea Butcher Brings It Every Time!