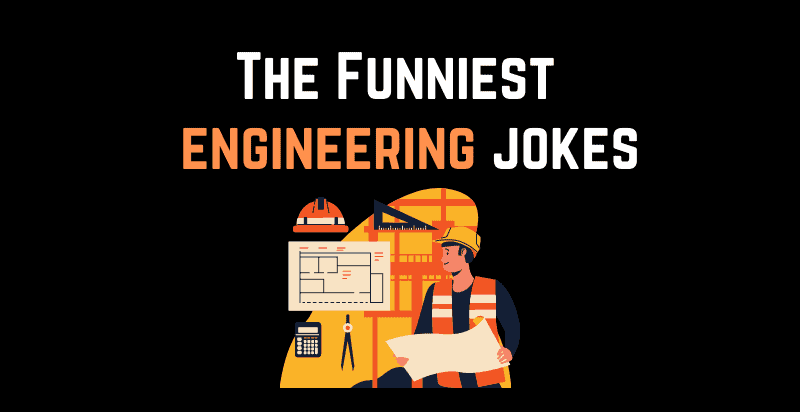 Engineering jokes are a way for engineers to laugh at themselves and have fun with their profession.  The engineering jokes in this section will not disappoint you. These jokes will make you laugh and also make you think about the world around us.

Two engineering students were walking across campus when one said, “Where did you get such a great bike?”

The second engineer replied, “Well, I was walking along yesterday minding my own business when a beautiful woman rode up on this bike. She threw the bike to the ground, took off all her clothes, and said, “Take what you want.”

The Measure of the Glass

To the optimist, the glass is half full.

To the pessimist, the glass is half empty.

To the engineer, the glass is twice as big as it needs to be.

There was an engineer who had an exceptional gift for fixing all things mechanical. After serving his company loyally for more than 30 years, he happily retired. Several years later, the company contacted him regarding a seemingly impossible problem they were having with one of their multimillion-dollar machines.

They had tried everything and everyone else to get the machine to work but to no avail.

In desperation, they called on the retired engineer who had solved so many of their problems in the past. The engineer reluctantly took the challenge. He spent a day studying the huge machine. At the end of the day, he marked a small “x” in chalk on a particular component of the machine and stated, “This is where your problem is.”

The part was replaced and the machine worked perfectly again. The company received a bill for $50,000 from the engineer for his service. They demanded an itemized accounting of his charges.

It was paid in full and the engineer retired again in peace.

An architect, an artist, and an engineer were discussing whether it was better to spend time with the wife or a mistress.

The architect said he enjoyed time with his wife, building a solid foundation for an enduring relationship.

The artist said he enjoyed time with his mistress, because of the passion and mystery he found there.

Engineer: “Yeah. If you have a wife and a mistress, they will each assume you are spending time with the other woman, and you can go to the lab and get some work done.”

The Frog and the Engineer

An engineer was crossing a road one day when a frog called out to him and said, “If you kiss me, I’ll turn into a beautiful princess.”

He bent over, picked up the frog, and put it in his pocket. The frog spoke up again and said, “If you kiss me and turn me back into a beautiful princess, I will stay with you for one week.” The engineer took the frog out of his pocket, smiled at it, and returned it to the pocket.

The frog then cried out, “If you kiss me and turn me back into a princess, I’ll stay with you and do ANYTHING you want.” Again the engineer took the frog out, smiled at it, and put it back into his pocket.

Finally, the frog asked, “What is the matter? I’ve told you I’m a beautiful princess, that I’ll stay with you for a week, and do anything you want. Why won’t you kiss me?”

The engineer said, “Look, I’m an engineer. I don’t have time for a girlfriend, but a talking frog – now, that’s cool!”

Related Jokes about other Professions: