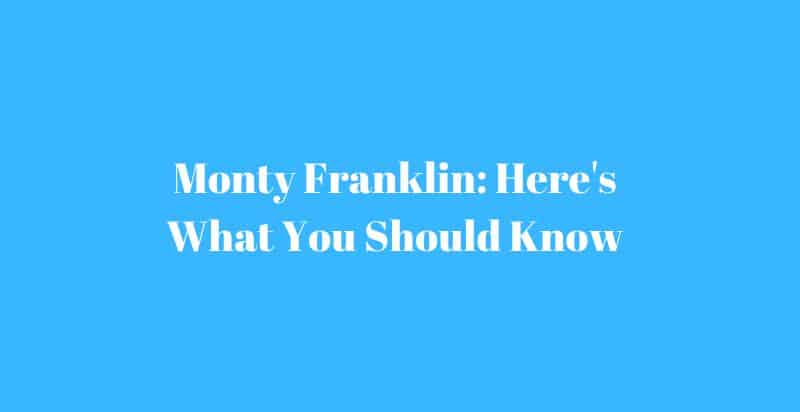 Be it live television or stand-up comedy, Monty Franklin has made his presence felt in several ways. Monty has the world’s best job (according to him); however, being good at this job isn’t necessarily easy. Monty was born in Australia and moved to Los Angeles, United States. He has performed stand-up comedy since 2003 and has achieved considerable success over the years. If you’re a fan, you’re in luck! We’re taking you some of the amazing Monty Franklin facts you may not have known – keep reading!

1. Alcohol Gave Monty Franklin the Motivation to Perform for the First Time

As Monty recalls, he has always been a shy man, and choosing the stand-up comedy route was something he would not have imagined in his wildest dreams. However, all of this changed in 2003 when he had too much to drink at the Gold Coast Arts Centre. Monty had a newfound confidence, and he went up to the stage and performed stand-up comedy for the first time. To Monty’s surprise, people found him funny, and that’s when he decided to pursue stand-up comedy as a career.

2. Monty Franklin Is a Shy Man

Shy and stand-up comedy doesn’t seem to go together, right? According to Monty, before he tried out his luck as a comic, he had little to no public speaking experience. Even when he had to order pizza on the telephone, he would get nervous. When it was his turn to read out loud in the classroom, his impending turn would make him freeze at the thought of his mates hearing his voice. This shyness stayed with Monty as he grew up until he performed stand-up comedy. This also means that stand-up comedy has helped Monty in many ways!

3. Monty Performs At Some of the Best Comedy Clubs in Australia

However, Monty has taken the stand-up comedy career too far as he is a regular and performs at some of the best spots for comedians in Australia. He is a regular host and has performed in several cities around Australia like Adelaide, Brisbane, Canberra, and Sydney. Even though Monty has had a short career, he has been fortunate enough to help some of the most popular names in the industry like Pommy Johnson, Dave Hughes, Dave Grant, Greg Fleet, and Chris Bennet.

4. Monty Was a Regular at the Melbourne International Comedy Show

Monty has appeared on T.V several times, and he was also interviewed before the 2006 Melbourne International Comedy Show began. He also performed at 2005, 2006, and 2007 editions of the show in which he performed in front of sold-out audiences. Apart from this, he has also been involved in some sports clubs across Australia with some of his comedian friends, which has garnered him a lot of praise and love.

Monty has appeared on “New Girl” on FOX and “Becoming Bond” on Hulu. He is also the creator of the show called “The Manny.” He made three pilots on Channel 7, and Fremantle Media. These collaborations consisted of stand-up, travel shows, and mixed sketches. Moreover, he has also had several stand-up comedy appearances on:

During the Melbourne International Comedy Festival, he received widespread acclaim for Monty McFly and The Full Monty.

6. Monty Is Close to Rob Schneider

Monty regularly opens for Rob Schneider on his stand-up shows, and he also appeared in Rob’s T.V. show “Real Rob” at the end of 2014. With Rob, Monty also performed at Carlos by Candelight in 2009 in front of 15,000 people. Now, however, Monty performs at comedy clubs across Los Angeles, amongst which some are:

7. Monty Comes from a Family of Fitness Enthusiasts

In an interview, Monty stated that his sisters and his mother are personal trainers, which was why he was forced to follow a healthy lifestyle. He also thinks he had to maintain a healthy lifestyle because Australia is full of killer koalas and crocodiles, so it feels like an Aussie is constantly on the run for their life.

8. Monty Has Taken the Tough Route to the Top

Monty only started to learn about the ins and outs of the comedy business when his peers accepted him. To do that, he had to go through years of open mic gags and some financially crippling shows on the road. Once he learned the basics, he started learning from some of the best in the industry (Rob Schneider).

According to Monty, Rob has given him some of the biggest opportunities. Rob saw Monty when he was performing at the Laugh Factory, and he has since opened up for him all over the world. Monty also appeared in his show “Real Rob,” a realistic view of Rob Schneider’s life.

Monty thinks that the whole notion of Australia for America comes from the show Crocodile Dundee. He thinks every American sees Australians as wild, laid-back, rugged, and polite people who love laughing and chugging down beers. He thinks this is the spitting image of most people he knows in Australia. He thinks people like Hugh Jackman and Steve Irwin have shown the world that Australians are great people and are proud of Australian stereotypes.

Monty thinks of himself as a storyteller rather than a comedian. He thinks that he’s good at telling stories, and whenever he finds a good story to tell, he fills it up with as many jokes as he can. He rarely writes out a joke to perform on stage. But he does wish that he did since several people ask him to tell a joke whenever he’s on stage, and he can’t make quick jokes.

Pinky Patel – A PTA Mom Turned Comedian or the Other Way Around?

13. Monty Came to Los Angeles Because of Increased Career Opportunities

In a recent interview with Woopdedo, Monty stated that he left Australia to take on bigger projects for his career. He feels that a stand-up comic can do things in America on a bigger scale. He has also made it clear that he wants to work on bigger productions like movies while staying true to his Australian identity.

His time in Los Angeles also landed him a T.V. pilot called “The Manny,” which was well-received by audiences worldwide. According to Monty, the hardest part of creating a show is the production bit. He thinks raising money for a show is the hardest part, and when that has happened, it can be less stressful creating the show since creativity can flow naturally. For him, the most fulfilling part was watching the show grow and then seeing the final product come to life.

14. Some of the Greats have influenced Monty

Monty claims that his comedic style has been influenced by Adam Sandler, Eddie Murphy, Rob Schneider, Jim Carrey, Ellen DeGeneres, and Robin Williams. But he still says that the best part is watching these people perform live and then learning from their experiences. At the moment, he claims that his favorite comedians are Sebastian Maniscalco and Bill Burr. He thinks some other lesser-known L.A.-based comedians will be famous in a few years. However, he still says it’s fun watching them hone their craft.

Do you want to catch a glimpse of Monty in action? Watch the video below, and you may fall off your chair laughing!

Put another shrimp on the Barbie and laugh along with jokes about Australia, or by Australians, by Joe McMahon, Monty Franklin, Sarah Lawrence, Tehran, and Mike Bobrinskoy! See a LIVE SHOW at the Hollywood Laugh Factory!

Monty’s journey from a relatively unknown comedian to becoming a big name in the industry has been inspiring to say the least. He’s a humble comic who loves watching other people grow so that he can learn from their experiences. If you’re interested in more articles like these, stay on the lookout! We’ll be posting more like these very soon.

Related Up and Coming Comedians To Read About:

Buckets of Laughter with Adam Gropman

Who is Anica Cihla?

Fahim Anwar – An Afghani Comedian You Need to Know!

Learn about Will Miles – a Rising Comedy Star