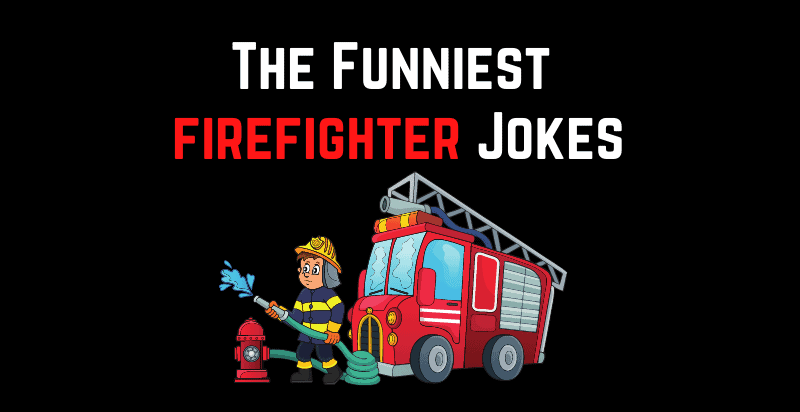 Today we have funny firefighter jokes, puns, riddles and short joke stories for kids and adults of all ages. These are good clean fun. These jokes are popular year round and especially around Halloween time!

The Funniest Jokes about Firefighters

let’s start with some short and punchy jokes.

What award do you give a firefighter?
Most extinguished

How do you know if a firefighter is at your party?
They will tell you.

What holiday do firefighters refuse to celebrate?
May Day.

Firefighters recovered just the bottom of one shoe after the shoe factory burned down
It was the sole survivor.

One dark night outside a small town, a fire started inside the local chemical plant. Before long it exploded into flames and an alarm went out to fire departments from miles around.
After fighting the fire for over an hour, the chemical company president approached the fire chief and said, “All of our secret formulas are in the vault in the center of the plant. They must be saved! I will give $50,000 to the engine company that brings them out safely!”

As soon as the chief heard this, he ordered the firemen to strengthen their attack on the blaze. After two more hours of attacking the fire, the president of the company offered $100,000 to the engine company that could bring out the company’s secret files.

From the distance a long siren was heard and another fire truck came into sight. It was a local volunteer fire company composed entirely of men over 65. To everyone’s amazement the little fire engine raced through the Chemical plant gates and drove straight into the middle of the inferno. In the distance the other firemen watched as the old timers hopped off of their rig and began to fight the fire with an effort that they had never seen before.

After an hour of intense fighting the volunteer company had extinguished the fire and saved the secret formulas. Joyous, the chemical company president announced that he would double the reward to $200,000 and walked over to personally thank each of the volunteers. After thanking each of the old men individually, the president asked the group what they intended to do with the reward money.

The fire truck driver looked him right in the eye and said, “The first thing we’re going to do is fix the dang brakes on that truck!”

A nursery school teacher was delivering a station wagon full of kids home one day when a fire truck zoomed past. Sitting in the front seat of the fire truck was a Dalmatian dog. The children began discussing the dog’s duties.
“They use him to keep crowds back, “said one youngster.

A third child brought the argument to a close. “They use the dogs,” she said firmly, “to find the fire hydrant.”

A fireman is at the station house working outside on the fire truck when he notices a little boy next door. The little boy is in a little red wagon with little ladders hung off the side. He is wearing a fireman’s hat and has the wagon tied to a dog.
The fireman says “Hey little boy. What are you doing?”

The little boy says “I’m pretending to be a fireman and this is my fire truck!”

The fireman walks over to take a closer look. “Little boy that sure is a nice fire truck!” the fireman says.

“Thanks mister”, says the little boy.

The fireman looks a little closer and notices the little boy has tied the dog to the wagon by its testicles. “Little boy”, says the fireman, “I don’t want to tell you how to run your fire truck, but if you were to tie that rope around the dog’s neck I think you could go faster.”

The little boy says, “You’re probably right mister, but then I wouldn’t have a siren!”

The Chief and his Deputy went golfing together one Saturday morning, as they have done since they were cadets 24 years ago. These guys were REAL fanatics about their golf.
That afternoon the Deputy returned home exhausted, and plopped down dejectedly in his easy chair. His wife, concerned by his appearance, asks if something went wrong with his game.

“No, no,” he replied, “I had the best game I had in years! As a matter of fact, I started out the first three holes at 4 under par, including a eagle on the 3rd.”

“So why are you so beat?” his wife asked.

“Well, the Chief had a heart attack and died on the 4th hole,” he said.

“What?!? And you’re so exhausted from trying to save him, huh?”